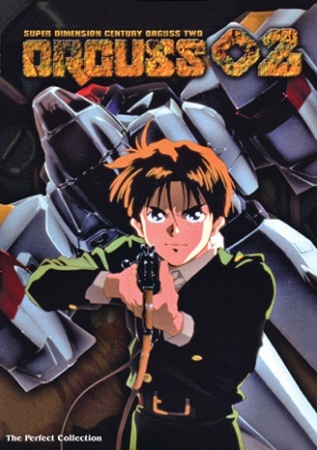 What the hell is this? It was supposed to be the sequel to the first series and yet it has no similarities to it. And it is far worse too.

ART SECTION: 7/10 [Anachronism strikes again.]
I admit that visually speaking, it is far better than the series. After all, it is 10 years younger, short in episodes and of OVA format, so such a thing was expected. The world is steampunk, as there are knights next to huge mecha and other anachronistic stuff. Body figures and cloths have generally high detailing and move generally realistically. Nothing we haven’t seen before but gets the job done. There is nothing eye catchy in all (such as unique looking mecha, extravagant cloths or cool cinematic effects) so I can’t give more than 7.

SOUND SECTION: 7/10 [What is that you said?]
- Mediocre voice acting, but with a twist. There is a strange language in it, which makes no sense and I PRESUME is made on the spot. Thanks to this minor detail the characters sound much more realistic, since they are from different cultures and having different languages makes it more realistic. No more “auto-translation” by some gimmick that makes everyone talk with the same tongue.
- The music is quite weird, as it doesn’t feel like pop or rock. Some sort of ambient, I guess. I can’t say I liked it; it sounds bull to me. I give some credit for originality but that is all.
- Sound Effects are passable. Nothing much too listen to, as they are part of the unimportant mecha battles.

STORY - CHARACTER - VALUE - ENJOYMENT SECTIONS: 2/10 [Who cares about all these?]
All the rest of the sections can be criticized together since there isn’t much to talk about, and frankly you won’t give a damn about the story or the characters. The story uses the typical “excavating ancient mecha and have a war” theme while the cast is more boring than the average mecha characters. Nothing happens most of the time, the characters feel stiff and bored with their own existence and the action is too simple to bother paying attention. It has its share of political intrigue and spying around but happens in a very uninteresting way. It does get a bit better towards the end but it is too late to make a difference.

VERDICT: 3.5/10
I really don’t see how this is a sequel. The old series was way more interesting and eye catchy. This felt like quick bucks by people who used the same name just to spice up a boring mecha mini series. Well it didn’t work.