ORESUKI: Are you the only one who loves me? - Recommendations 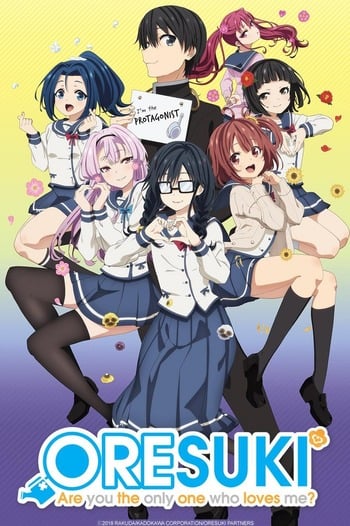 If you're looking for anime similar to ORESUKI: Are you the only one who loves me?, you might like these titles.

If you liked this, you'd definitely like this too! Both feature mob character tier high schoolers that are fine with the status quo but are still thrown into situations they dont like!

Well, well, well—if you like those kind of dramas where you'll wish polygamy exists... this is another harem for you, cause you'll definitely need another harem in your life. And besides, what's the hurt of adding a bit more of character to the MC? Oregairu (aka My Teen Romantic Comedy SNAFU) lacks the plot-twisting benches, but you'll enjoy it.

These anime are similar watches if you are looking for a series that mocks the conventions of a normal rom-com anime. Unfortunately, Oresuki gives up that fight about half way through and falls into cliche waters. Regardless, they still share a lot of basic pieces, and would probably be fun watches if you're looking for a rom-com that parodies rom-coms and attempts to try somethign different.

Later in the anime the girls start to change their mind about the boy they like so instead they start liking the protagonist and Toradora is like that since Taiga changes her mind and also the male protagonist also changes his mind on who he loves.

These 2 anime are actually quite simmilar with all the psychological love games. If you enjoy Love is war I think you will definetly enjoy Oresuki and vice versa as well.

Both shows offer have a great comedically driven take on the classic high school romance setting.

Both are actually funny romantic comedies.

Both involve a guy who is conscious of the moves he's making.

The world God only knows is a pretty good anime imo so its worth a try if you enjoyed Oresuki.

Hyouka is a slower, more serious version of Oresuki, at least with regard to the mystery spin on slice of life level puzzles. There is way more romance in Oresuki and the comedy is a little more blunt, but there is plenty of affection and dry wit in Hyouka to make it worthwhile for Oresuki fans.

They are both very similar animes. What's common is that both of the main characters are trying to find which girl out of all of the girls are his sister (Nakaimo) or the girl that sent the love letter (Oresuki). I prefer these 2 animes both ways because if I enjoyed both of them, so if you liked one of them, feel free to watch the other one since you most likely would enjoy it.

The second year of high school is starting and things are still as crazy as always. Despite numerous attempts, the ever-so-hopeful Harima and the overly-naïve Tenma failed to get their message of love across. Now they are pumped up for a new term and ready to renew their illustrious and self-destructing attempts at a confession! But be it a love infested manga or even a gigantic plate of curry; nothing seems to do the trick. What other methods can they take, as the old love triangle is expanding at an alarming rate?!