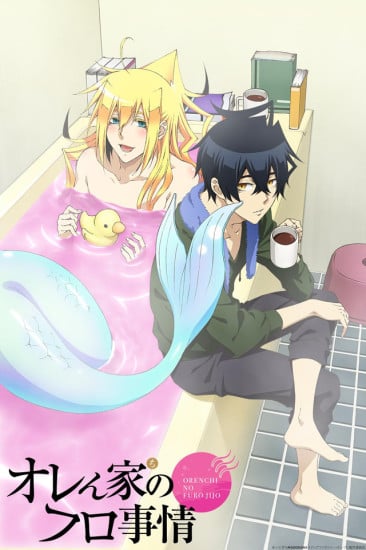 One day at dinner after Wakasa is finished eating, Tatsumi finds leftover bell peppers and carrots on his plate. When Tatsumi asks why he doesn't eat vegetables, Wakasa responds being a carnivore is the current trend.

The Special Circumstances of My Bathtub

The Severe Circumstances of My Household Budget

The Halloween Circumstances of My Household

The Circumstances of My Bubbles

The Trendy Circumstances of Modern Men

The Seven Transformations of my Bathtub Circumstances

Anime-Planet users recommend these anime for fans of Orenchi no Furo Jijou. All available to watch right here, right now!

Teenage boys are notoriously lazy, and the members of Binan High School's Earth Defense Club are no exception. Their definition of “earth defense” is bumming around all day at the local bathhouse. But when a pink wombat appears out of thin air and begs the boys to help him save the planet, even the idlest high schoolers jump to action. Watch the...

Both series are light hearted comedy anime with plenty of hot male characters.  While neither series is technically BL, they do have alot of BL-ish undertones as well as male nudity/near nudity.  Also, both shows have plenty of bath scenes.  Of course, they have different subjects matter (Orenchi no Furo Jijou has human-sea creature hybrids, while CHEDCL has magical boys) as well as different episode lengths, but I have feeling that those who like one of these shows will probably appreciate the other as well.

They're both hysterical anime focused around a loveable cast of male characters.  Both poke fun at BL trends, and the trends of other genres they are parodying.  They are both sweet, lighthearted, comedic shows.  If you enjoyed one, you might enjoy the other.

Both of these anime are comedic romps with lots of cute boys. Both frequently end up with said cute boys all in a bath. Why? Well, one is about seafolk in modern Japan, the other is about magic boys and one of them helps run a public bath. But details, details. It's all about the near-shounen-ai comedy. So, if you liked one, try the other

While they have different plots (and different episode lengths), both anime seem to appeal to the same audience.  Both have mostly male casts (and hot looking male characters at that).  While neither is truly a BL anime, they both at the very least have BL-ish undertones.  Both can have their funny moments (though Free! has plenty serious moments too).  Also, some of the voice actors who voice characters in Free! also voice characters in Orenchi no Furo Jijou.

Both series are set around the water (wether that be bathtub or the pool), and guys who either are mermen or swim so much they might as well be.

While visiting his hometown, junior high school student Michishio Nagasumi's life was changed forever when he nearly drowned. Though he was saved by a mermaid named San, there’s a catch -- her family is part of a merfolk mafia, and they abide by a strict rule: If a mermaid is discovered by a man, either he or the mermaid must die. That is, unless the...

Both animes are about merrmaids.

My bride is a mermaid got more romance.

Orenchi no Furo Jijou is a pretty short anime.