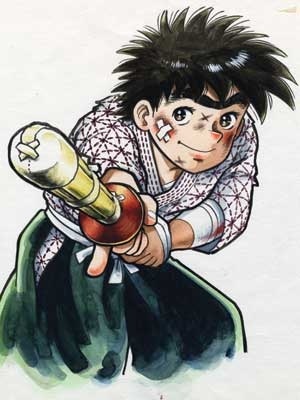 Ookido Yuu is an extremely tall girl who just entered middle school. Because of her height everyone is trying to recruit her into their sports club, even though she is terrible at them. Her childhood friend, Ken-chan, who is still in Elementary, keeps on telling her to join the Kendo club. But she hates Kendo because she never had a single victory against him. Find more about Yuu in this spin-off of Bamboo Blade.

Two girls with polar opposite personalities are both attracted to the sport of kendo.

Wandering around in despair, Kensei comes across the secret hideout of Ashihara Naoto. She seems highly skilled in kendo, though she spends all her time reading and claims she hates the sport. Naoto reluctantly helps him train up to prove his worth to the kendo club, though she refuses to join the club herself. On the final day of club sign-ups, Kensei finally makes it into the Kendo club, along with his childhood friend Hikari, who becomes the first female member!