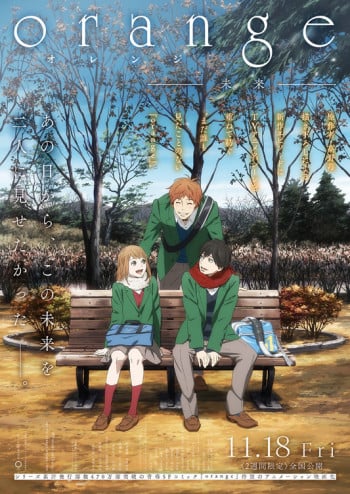 I will first say that this anime is one that has touched me deeply, and I have fallen in love.

Personally I am the type that can only take so much sadness. There have been TV shows or anime’s that I have stopped watching simply because how depressed I became after each episode was not worth sticking to the end. With that in mind, while this anime was sad it was able to balance itself out in a way that you could digest the story easily and with anticipation. Orange is about a girl, Naho who wakes up one morning to find that she receives a letter from herself 10 years in the future — the letter tells her about a new boy coming to school that day, Kakeru. It tells her how to handle him in her life because 10 years in the future he won't be with her and their friends. Will she be able to save him? Please watch to find out *chuckles mischievously*. The story is beautiful, realistic so it doesn't make me annoyed when something illogical happens. Not only that but the ending *sniffles* can I say perfection? I applaud Ichigo Takano.

The animation itself is so high quality that I constantly notice it when I watch it, and the art is what first drew me to click it. I am quite superficial so I am the type of person who doesn't like watching anime that doesn't tend to have high quality or more of a delicate appeal. The style is more realistic than your average anime, I really, REALLY, appreciate how you can easily differentiate characters and that there is a distinction between everyone. Nobody looks the same, yet they are all a masterpiece.

Now, I know that dubbed anime is sometimes a controversy because some people believe them to always be bad, to those people I say please give it a chance. The voices fit each character perfectly, and I could tell that a male was actually playing the male characters roles opposed to some anime’s that make a woman play the mens role (for that I have no idea why!). They complement the characters well, and I enjoyed it.

The character grade is the only one that I didn't give a full mark to and this is why. While everyone was amazing - I did see that one or two....Or actually just one character — a mere guest on the show who appeared in small cuts of a couple episodes seemed to be a character that was very unoriginal in a mean girl/pretty girl sense. However this was so minor that it only affected 0.2 of a point.

I loved Orange - It has the power to make you feel exactly what the characters feel and I highly, HIGHLY, recommend this to anyone who loves any genre because in it is a wonderful and beautiful lesson learned.

A nice reacap movie from Suwa's POV, with a nice surpirse at the last 20 minutes of the movie. We learn how the character's future self send the letters ( I still cal BS on that but that's just a anime right ? ). Still, it was a good addition ( not really needed in my opinion ) to the anime. I still would have liked better a movie taking place after the anime so that we can see how naho and Kakeru live their life as a couple. But that's just me.

If you watched the series then you must watch this movie. You can check my review on Orange then you will know why it is so important to watch this movie.https://www.anime-planet.com/users/TahmidAqib/reviews/46917