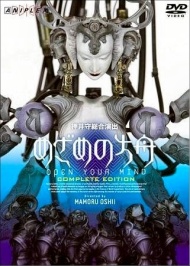 This movie is certainly among the least known fruits of cooperation between director Mamoru Oshii and composer Kenji Kawai. Just like most Oshii's works, the movie has a rather complex thematic background. However, the topics and the message aren't clearly stated, as the anime is very abstract and open for interpretations - there isn't a story in a typical sense, although the story can be inferred.STORYFirst, the seeds of life are brought to the Earth with meteorites crashing into water, and we see several creatures similar to pagan gods standing silently in the forest. Then 3 acts go, each with its own musical theme: they represent Water, Air, Earth and the life forms there. At last, a figure appears: it looks like an android with multiple hands & faces, and then we see the empty forest that the "gods" left.The whole thing may be described as an abstract and slow-paced Discovery movie with sci-fi elements that shows the process of evolution exemplified by the planet's nature. The nature in the movie is quite similar to the real one, although the giant bird that appears in the Air act looks different from any existing species. As for the "gods" & the robotic "god", I interpret it as an allegory of human evolution and how we pass from biosphere to noosphere, abandoning our natural roots and developing a new form of consciousness influenced by technological progress (which is somewhat similar to the themes explored in Oshii's Ghost in the Shell). Overall, I enjoyed those visual sequences as a relaxing and thought-provoking work, yet they aren't really something I would be eager to rewatch. ANIMATION & SOUNDThe animation is a combination of CGI & live footage, and it leaves a somewhat controversial impression:1) the quality is a mixed bag. Some parts of the movie are good-looking and full of captivating symbolism; on the other hand, some visual effects look really cheap (for example, those lightning bolts at the beginning);2) some artistic decisions are questionable. For instance, those "gods" and android are fairly creepy and not very pleasant to look at, and even more so is a certain part of the Earth act showing the evolution of mammals. Or, there's a long segment of the Water act, where whales and sharks rotate smoothly in a round dance... with sky and clouds as a background. It obviously looks relaxing, but how does it make any sense at all?3) finally, the show uses lots of repetitive sequences, like a school of fish swimming in the ocean or clouds flying in the sky. While I guess the repetition was done on purpose to create a certain relaxing effect on the viewer, I'm also sure the movie would look more interesting if the imagery was more diverse and didn't repeat itself all the time.Overall, the visuals are fine yet they can't be compared with a real Discovery movie, which leads me to believe the creators either needed higher budget or should've used some different animation techniques and approach in general.As for the sound, it's simply fantastic: Kenji Kawai does it again. Imagine his soundtracks from Ghost in the Shell movies with drums, symphonic orchestra and polyphonic chants, add some sounds of nature and zen music, and you'll get the picture. Even if not as impressive as GITS OST, it's sure very close to that level. Obviously, this surprised me the most about the movie. OVERALLWell, the anime is very abstract, very slow-paced and has no plot & characters in the normal sense of those words, so it's definitely not for everyone. On the other hand, if you want something relaxing and thought-provoking, and you like Kenji Kawai's music as much as I do, you might still enjoy it as a fine one-time watch.