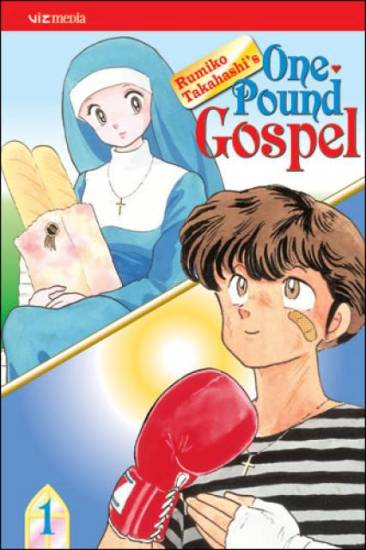 Directed by anime pioneer Osamu Dazaki and written by famouse manga author Rumiko Takahashi. This combo should be a defiening work punching new highs in the newly founded OVA format. Unfortunetly the great pair do not reatch anything to high in this work.

The origenal One Pound Gospel manga was a "benched project" taking 20 years to complete! Perhaps this anime has become outdated and stored in cobwebs only to be seen by adept fans of the two makers?

The story hitch line is simple, Kosaku is on the border line of being a heavy weight/lightweight boxer. If he's lightweight he's unstoppable but if he pigs out on food and goes heavyweight, he's doomed. His coatch grows tierd of his poor choises and is up to his new coatch god to help him.  It sounds like a very good story but prepare to be disapointed in the "charectors" section...

Keeping in mind that when this anime was in production only 25% complete, so that gives indecation of a loose plot.  I have not read the manga so I can't tell if the script writer of manga creator came up with a suitable ending for the anime.

This is realy where the show goes belly up. It is very rare to find an anime that has religion "except Shinto" that uses religion as part of it's main concept.  I was born Catholic but always viewed it as being part of my culture rather then to identify my self with my religion, however like all religions it should be dealt with sensitivity.  And after all, religion is encridibly interesting and makes for great drama. One Pound Gospel makes no such moves on this.

The main charector Kosaku is placed as the main charector yes is selfish, uninterested in how his negetive actions effect others and a cheater.  After watching the anime when as would be expected all goes his way you may pesimistically say to yourself. He hasint learned annything, he is doomed to fail later on in life.

Supporting role goes to Sister Angela who wants to help main charector Kosaku can't die to Kosaku's own ignorance. There are some funny scenes throughtout the anime and overall the shows story is gloomy when thought about after watching it.

Being a low quality OVA I give the sound department mercy but music wise it's everything one coukd expect.  An indevisual could have composed the music in there head.  It is way to generic for its genre.

Being a big fan of Osamu Dasaki I had high hopes for this little anime. My viewing quality was poor so I couldint see to clearly if there were any flaws. The art style genre dosint realy give was for detail so not much was needed to make this anime my thought are.

Final Thoughts: For the few.

• Something short to watch

Story
Hailing from a line of OVAs by Rumiko Takahashi (Mermaid Forest, Fire Tripper, Laughing Target, Maris the Chojo, etc.), One Pound Gospel, like all the others, is set in an entirely different venue than all the others. This time, a boxing ring.

The story centers around young Kosaku Hatanaka, a boxer who doesn't necessarily take things seriously. I know nothing about boxing, so I'll mention one of the main points of the series that I had explained to me. Boxers need to stay within their weight classes in order to fight in it. Thus, boxers often starve themselves and drink no water a few days before the match, so they can fit in their weight class. Kosaku doesn't really care about this, and eats anything he wants. This causes him to move up the weight classes and upsets his coach, and eventually ends in him puking in the ring, thus being disqualified.

Through various events Kosaku met Sister Angela, a nun (that hasn't signed her vows yet, I might add) at a local convent. She's 21 and dare I say an emotional interest? Why else would they have made her 21! Anyways, though the cover of the VHS tape suggests that this is heavily centered around Kosaku and Angela, and in reality, I felt that was false advertising. It's like advertising that it's about a boxer who has to overcome his fears and become the best isn't good enough, so they had to throw in the one anomaly the story had (the nun) and make it seem like she's a major player. In reality, she's only around a small amount of the time, but quite frankly the coach had just as much to do with his accomplishments as she did. In general, the story centers around Kosaku having to stop eating and be the best so he can win an important upcoming match (that revolves around a misunderstanding, no less).

The story was decent, but I must say I wasn't inspired. If you are looking for a sports-related motivational story about an underdog who makes it big, there are plenty of them out there such as the acclaimed Hajime no Ippo, and others such as Ayane's High Kick. For an anime to excel above others, it needs to have something unique and mindblowing, and the inclusion of a nun didn't do it for me. The tone was definitely a motivational one the entire time, watching Kosaku go from a zero to a hero (forgive the cheesy line). There was a small amount of humor intermixed but it was fairly mild and non intrusive. Overall, the tone was fine, the story was fine, but it definitely was just a notch over average as far as the score.
Animation
You'll immediately recognize the character designs of Rumiko Takahashi. Characters have swooping hair and very oval doe-like eyes. Colors are very light at times, almost like dark watercolors, and are vibrant at other times. During boxing scenes, for example, we see the gleaming red of the boxing gloves, but action scenes are intermixed with very scribbly looking backgrounds that don't impress. There are various still scenes as well, mostly towards the end. In general the animation was decent for its time period, but nothing fantastic or special, much like the other Rumik's World OVAs.
Sound
The music was almost entirely wailing 80s sounding buttrock or jpop. Admittedly, this fit the tone some percentage of the time, but the rest of the time it would have been nice to have some stereotypical sporting music or other bits. I can't really go into more detail because I felt the music was quite average. Voice acting seemed fine for everyone involved.
Characters
As mentioned in the story section, the box cover leads you to believe there are two main characters: Kosaku and Angela. In reality, Kosaku is definitely the main character and Angela is merely secondary. If anyone developed over the course of the 60 minutes, it was Kosaku. He was very undedicated to boxing (and quite frankly, I wondered why he was a boxer at all), and always ate things he shouldn't have. Dare I say Kosaku also reminded me of a brainless sorority girl? It's like he didn't get it most of the time and always acted spacey and distant. For someone that needs to be motivated to win a boxing match, and for someone that supposedly grows over the course of the series, this made it difficult to believe.

Angela is the other main character but is definitely secondary, and only develops a little bit. Admittedly, her character is a bit more amusing since she's a nun and is doing things like drinking and threatning people with broken bottles, but besides that I felt like she had nothing to offer except reciting religious-related things for the umpteenth time.

Other minor characters were around as well, such as Kosaku's upcoming ring-mate who is pissed just because Kosaku accidentally hit him. HELLO OVERREACTION?! If Kosaku is the brainless sorority girl, that guy would have been the testosterone-heavy frat boy who can't wait to down the drink in rohypnol. Others like the coach were more amusing, with quirks such as crying out loud. In general, a varied cast of characters but somewhat unconvincing.
Overall
Overall, One Pound Gospel was really average. I can't say I'm terribly surprised, as I'm not a Rumiko fanboy and I found many of the other Rumik's World OVAs to be dull and uninteresting. Perhaps it was the fact that I'm not a huge fan of boxing or sporting shows? Whatever the case, the inspirational moments were overshadowed by the mannerisms and attitudes of the characters, the animation was good but not great, and the music was so so. If you really enjoy boxing or really MUST watch all the Rumik's World anime out there, then check this out. Otherwise, from what I've heard you'd have a better and more enjoyable time watching Hajime no Ippo than you would watching this 60 minute one shot OVA.