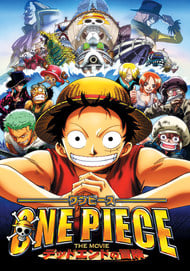 Luffy’s crew is in dire straights: they are in the Grand Line, running out of money fast! In their search for a quick fix, they find out about a Pirates race. Should they survive the treachery of the other pirates and the Grand Line itself, they can net over 3 million belli, making the venture profitable indeed. Of course, they immediately sign up, knowing that if they win their problems will be solved – but the opposition is no joke. Devil Fruit users, merman, huge giants and bounty hunters all stand in the path to their success!

This is the fourth One Piece movie, theoretically taking place after the Navarone arc and before they go to Water 7. Just like all movies, it is a filler mission with a good budget and a simplistic plot. But unlike the previous ones, this is quite darker and more violent. It also has some nasty backstabbing going on, as well as interesting cameos from all over the main series to further give you a feeling of familiarity. The story is just about the Strawhat Pirates taking part in a race of pirate crews. The first to reach the goal at an unknown island will receive a huge amount of money. Although the premise seems simple and unimpressive, along the way it becomes a lot more complicating thanks to some cool plot twists. Amongst the strongest competitors is Gasparte, an ex marine with a huge bounty who has a bounty hunter after him, because he killed his family many years ago. These two turn the tables to the point the race becomes a death trap and you literally feel like people are actually dying in here. And this is what I liked about the whole thing; the premise ends up being smokescreen for far more sinister plans. This is where I will tribute some words for the main villain. Gasparte doesn’t really care about winning, as much as being the last man standing. He is extremely powerful and doesn’t seek more power like all the previous bosses did but rather to take out the competition in any means necessary. He is also modelled after Crocodile from the main series in a way, since their looks, powers and even their bounties are almost the same. It must also be noted that originally the movie was only supposed to be dedicated to the latest addition to the crew, Robin (and her voice actress). But guess what, she only ends up being a minor character in the whole film and all the focus is given to the new characters of the film. Something of which I found to be very cool.Then we have the bounty hunter. Far stronger and macho than the typical useless brat that asks for help and is even fleshed out nicely with the drama in his past and his quest for vengeance. If there is a part I didn’t like much is when he ends up finding another brat … which hasn’t aged at all despite all the years he knew it. Some sort of plot hole I guess. But hey, that kid can fight, and has killed people, and he feels proud about it. Good sidekick. A thing I liked was the action scenes. You didn’t feel like it was the good guys versus everybody else, since many crews were fighting each other. Plus, the mini-boss of the movie is surprisingly not even dealt by one of the Strawhats. Furthermore the final battle had some strategy in it instead of being Luffy with his unstoppable power just owning everything without thinking. Although the method he used was similar to the one he had for Crocodile, it’s the feeling of tactics that matters; something quite rare in the anime. Another thing is how there was nothing here for Oda to take ideas from and add it to the canon story later on. In the contrary, this movie was a big tribute to all the major events that have happened so far to the point it felt like the movie was part of the main series. Oh, they also used some quite impressive 3D effects here, like the introduction scene where the camera zooms through the alleys, as well as creating waves during a storm. Although rather crude after all these years, they were great to give motion and life to the setting of the movie. There is also a lot of darkness in this; a huge contrast to the cheery ones of the previous movies. Helps to build up the necessary tension for such a dark tale.Although it is mostly a cameo parade as well as a slight alteration of the Arabasta arc, it is one hell of a ride and a movie I openly recommend to the fans of the series. And now for some excused scorings. ART SECTION: 10/10 Analysis: General Artwork 2/2, Character Figures 2/2, Backgrounds 2/2, Animation 2/2, Visual Effects 2/2 SOUND SECTION: 6/10 Analysis: Voice Acting 2/3, Music Themes 2/4, Sound Effects 2/3 STORY SECTION: 8/10 Analysis: Premise 1/2, Pacing 2/2, Complexity 2/2, Plausibility 2/2, Conclusion 1/2 CHARACTER SECTION: 7/10 Analysis: Presence 2/2, Personality 2/2, Backdrop 1/2, Development 1/2, Catharsis 1/2 VALUE SECTION: 4/10 Analysis: Historical Value 0/3, Rewatchability 1/3, Memorability 3/4 ENJOYMENT SECTION: 7/10 Analysis: Art 1/1, Sound 0/2, Story 3/3, Characters 3/4 VERDICT: 7/10

This movie is about a race between pirate ships, it has a great layout, good characters, and a storyline. Even the fights are some of the most enjoyable thus far including from the series(as of Ep.145). This shows again how useless Nami actually is and Robin is again tons more useful in this one movie compared to 145 episodes/4 movies and a couple of shorts then Nami is she only has 1 good fight in all that(against Miss Doublefinger) and Robin has done so much more in a small percentage in comparison Pros: Great animation, new visual effects, a greater arrangement of characters. Cons: Music must be improved, it just doesn't get my attention. The multiple fights of crews not involving the Strawhats, the alterations of the Eternal posts to a Marine Base. A darker undertone filled with backstabbing and deception is very prevalent in this movie. The lieutenant fight with the ancillary main character was very good. Plot twist I knew the little boy was his sister after the storyline was injected in. The boss fight was a bit samey but good nonetheless. It definitely is a great movie, it could be a multi-view go-to. 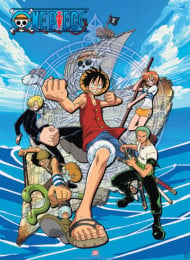 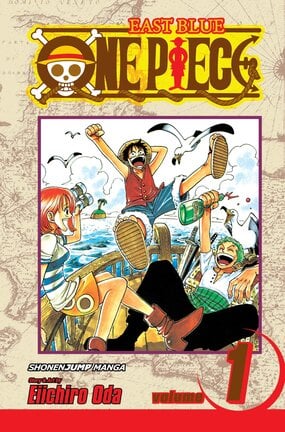