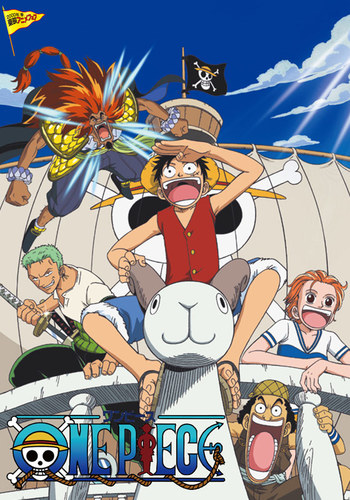 This is the first One Piece movie, theoretically taking place after Usopp joins the crew and before Sanji is introduced. Just like all movies, it is a filler mission with a good budget and a simplistic plot. And indeed, the story is just about the Strawhat Pirates trying to find a great treasure before an evil pirate crew does. Why? Well, the adventure sounds like fun and there is a kid asking for their help, so how can their shounen hearts say no?

As simple as it all sounds though, I must say the premise is quite far fetched for the point in the storyline it was thrown in. The treasure is supposed to be around 1/3rd of the world’s riches and the main villain has weird Dragonball super powers. It just doesn’t feel like that sort of grand-scale premise fits into the weakest and calmest of the world’s seas. This is something one would normally expect after the CP9 are introduced. Hell, why is there even a character called El Drago, when the main series already has Dragon? But hey, since when do filler movies try to be consistent? Anyways, a notice must be given to how the real form of the pirate treasure may as well be the real One Piece of the main series. Since Oda takes ideas even from these movies into the canon story later on, I wouldn’t be surprised if it is so. In a way the first movie may be spoiling one of the greatest mysteries of the show.

As epic as it sounds though, the overall plot is as I said quite simple and unimpressive, and has the usual kid asking the heroes to help out fuss. So you will just watch this for the action scenes, which are not bad at all. They are definitely longer and more elaborate than those of the earlier Ganzack OVA and there is even a mini-boss for Zoro to fight and show off his powers properly. If there is something I didn’t like is how final boss El Drago was being defeated constantly with his own power turned against him and he didn’t just stick to using cutting attacks. I also didn’t understand how Luffy could block or deflect energy beams but then again I am overthinking in a shounen filler movie. Let’s just say I didn’t like how Luffy didn’t really use any actual strategy in battle other than having infinite stamina and using the attacks against the bad guy. Cheap!

In all, it is quite the passable movie. The story is too simple and even out of sync with the point it’s supposed to take place, while the action, as flashy as it may be, lacks any real excitement once you realize the protagonist has plot armour.

Better than the OVA but it's just a longer episode, which is fine IMHO. A nice boss with a good lieutenant for Zoro, Nami, and Usopp are there. Like 40+ servings of Oden for 11

. This time we follow the crew on the finding of a literal mountain of gold only to find a skeleton and a note saying he's Robin Hood.

Ok so the movie could have been good if it wasn't too fast paced. The characters introduced are OK and the villian was average well it is just a movie so I won't force u to watch it.