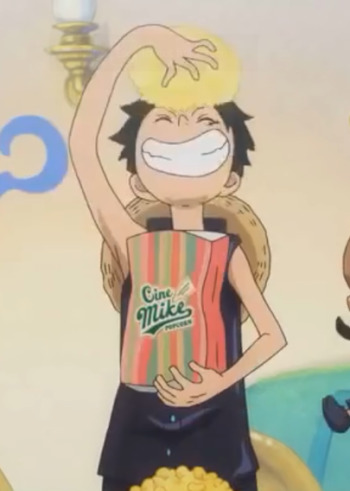 Popcorn that tastes like corn. Buy some for a limited time.

That’s all this is about.

Luffy, Usopp, and Chopper try some and are immediately hooked.

It’s a quick little promotion for a product that probably appealed to those anticipating the film. Watching 3 years later doesn’t make one too hungry for the food but it might make you wish you’d known about it or to do some online searching for some near you.

Luffy’s love of meat appears to be put aside for this treat which could make viewers wonder if there is more than just a corn flavor to the popcorn but without trying it personally there is no way of knowing for certain.

The absense of the other crew members is also a bit of a let down. It would be more inticing if all the crew was promoting the popcorn since some main characters may not be liked by the viewer. This reviewers favorite characters is not amoung the trio.

Others may also be more likely to try the food if there was a bit more to the promotion than three males stuffing their faces. For example a certain drink or candy that complimented the corn flavor. This reviewer is not all that sure what beverage would pair with the popcorn and the wrong combination at the concession stand could make the memory of the movie more negative than positive. Not a result the popcorn makers or the staff of One Piece should be aiming for.

On the plus side the video content is what the title says it is and the visual appeal of the popcorn is decent for a  commercial and as most would agree, movies are better with the corn that pops. So the overall message, try the product if you can and/or just go watch or rewatch the Gold movie.