One Piece: Episode of Skypiea - Recommendations 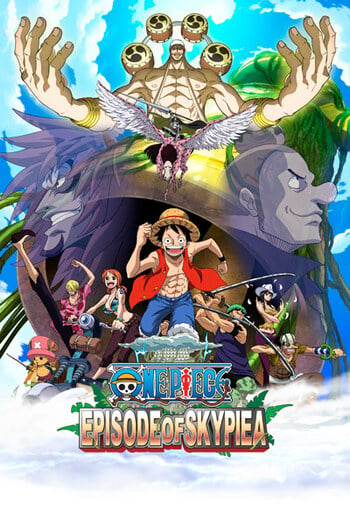 If you're looking for anime similar to One Piece: Episode of Skypiea, you might like these titles.

In a golden age of pirates, one young rookie namedMonkey D. Luffy is taking the world by storm. Setting out from his hometown in a small boat, Luffy is slowly gathering together a crew of strong friends to help him achieve his goal: to become the king of the pirates! Using his powers as a rubber man and relying on the strong bonds with his crewmates, the Straw Hat Piratestraverse the treacherous seas of the Grand Line battling tough enemies, preventing revolutions, exploring islands in the sky, and declaring all-out war against the world government. However, catching the eye of the marines has its price. With the full force of the navy on their tails, willLuffy and his friends make it to the second half of the Grand Line, let alone attain their dreams?

One Piece: Defeat The Pirate Ganzak!

Twenty years ago, the notorious pirate, Gold Lion Shiki, managed to achieve the impossible: he became the first person to escape from the maximum-security marine prison, Impel Down. Having spent the last two decades in hiding, Shiki has now returned, and he has a series of nefarious plans in mind. One day, after a chance encounter with Luffy and the gang, Shiki takes a liking to Nami’s talents as a navigator and decides to claim her for his own, scattering the rest of the crew across his various floating islands in the sky. Now, Luffy and the Straw Hats must fight their way past Skiki’s army of modified animals in order to save their comrade and stop the Gold Lion’s plot to destroy East Blue and gain control over the world.