One Piece: Defeat The Pirate Ganzak! 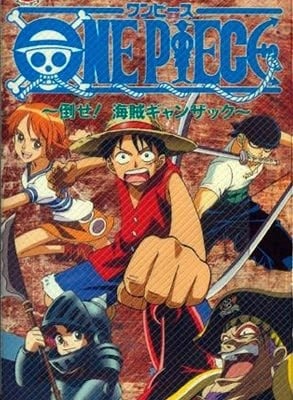 One Piece may be considered the best perpetual ongoing shounen of all times, but its first anime adaptation was actually a short OVA, aiming to promote it and subtly prepare the way for the main series to begin next year. Strangely enough it is made by an entirely different studio, and for that reason it also has a very different animation style, as well as voice actors. I have heard from most viewers how they didn’t like it because it looks weird and has different voices but these reasons are mostly aesthetic since we were accustomed to the Toei style. It is not bad at all for the year it was made and actually has some very good names in the production team. Studio I.G. has far better budgets than Toei and poured enough in this short to make it look ok. The director of it was Taniguchi Gorou, and this was also his first wok. Later on he went on to direct many other famous/cult anime, such as Infinite Ryvius, Planetes, and Code Geass. As for the voice actors, the villain is voiced by none other than Wakamoto Norio, one of the most distinguished and cherished ones in the field. All the bright people in the world though are not enough to make a good omelette out of rotten eggs, and it is true that the plot is too short and simple to mean anything. In just half an hour, we get a more than linear story of the gang having to beat a pirate for food. It also plays out quite anti-climactically, as there are only three of them, they don’t even have their first ship yet (just a small boat) and the villain just wants to build a ship and a base. Not that the later movies were doing a much better job but at least offered a bit more time to building up the tension and fleshing out the secondary cast a bit. Yet here we have this child trying to protect the island and the bad pirate exploiting the population and we barely get anything worth remembering them about. And seriously, having a kid asking from the heroes to help turned out to be an overused and lame trope for the franchise.Now something regarding the pirate Ganzack. Aside from being a filler character without a backdrop that we will never see again, he is also a very weird blend of various cannon villains. He has the clothes of Baggy, and the mechanical weaponry of Don Krieg. And if I stretch it, since Oda eventually took ideas even from the movies for his later arcs, Ganzack also uses a crab weapon like a very minor pirate captain in Merman Island. But hey, he is voiced by Norio and that alone gives him some style, lol.The action scenes are good for their time; simple yet with fluent motions for the most part that make them a bit likable. The problem is, they last too little to get you into the proper mood but they are not bad. The sound part is unimpressive in terms of music and terrible if you can’t get past the different voices the characters have. In all, it is quite the passable little OVA but the open minded should accept that it’s well made or how it was meant to promote what was to be the most adorable long-term shounen of them all. And now for some excused scorings. ART SECTION: 7/10 Analysis: General Artwork 2/2, Character Figures 1/2, Backgrounds 1/2, Animation 2/2, Visual Effects 1/2 SOUND SECTION: 6/10 Analysis: Voice Acting 2/3, Music Themes 2/4, Sound Effects 2/3 STORY SECTION: 4/10 Analysis: Premise 1/2, Pacing 1/2, Complexity 1/2, Plausibility 0/2, Conclusion 1/2 CHARACTER SECTION: 5/10 Analysis: Presence 1/2, Personality 2/2, Backdrop 1/2, Development 0/2, Catharsis 1/2 VALUE SECTION: 1/10 Analysis: Historical Value 0/3, Rewatchability 0/3, Memorability 1/4 ENJOYMENT SECTION: 2/10 Analysis: Art 1/1, Sound 0/2, Story 0/3, Characters 1/4 VERDICT: 4/10

Ugh I really can't do it, it is literally just a normal episode of OP. It is the very first one so there is wiggle room for improvement. Art style is similar, voices are similar Luffy is a bit different, and actions are very hilarious. Especially when Luffy runs up the creature's neck and bites its throat big lol there. Pros: The beginning sorta, the intro to the series at least, basic OP, basic music. Cons: A boss fight against a normal person, uh huh. Same as series, boss fight was way too short and a bit rushed(I mean it's a 30min eps) and insane ending(bad guy punched into a bomb killing him). 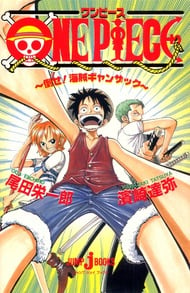