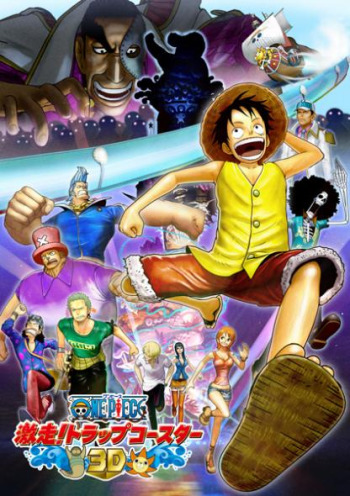 If you're looking for anime similar to One Piece 3D: Gekisou! Trap Coaster, you might like these titles.

When Luffy’s hat is stolen one night by a large bird, the entire crew begins scouring the ocean in search of the flighty thief. While searching, Usopp and Chopper happen upon a mysterious and sick pirate on an otherwise deserted ship and take him aboard the Thousand Sunny in order to treat him. However, before they can deal with their new guest, the Straw Hat pirates must catch up to the bird, evade the marines that are hot on their tail, and escape from a den of giant sea monsters!

One Piece Special 1: Adventure in the Ocean's Navel

One peaceful day, Luffy and his crew happen upon an old treasure chest which holds a skull with a message: ‘Plunge into the Ocean’s navel; therein lies the secret to making your dreams come true…’ Intrigued by the note, Nami, Sanji and Usopp are lowered into the abyss to explore – and hopefully snag some treasure - but they get more than they bargained for when they are attacked by a giant octopus! Meanwhile, Luffy and Zoro are swept away to a derelict town that is plagued by giant sea creatures. They soon learn of the notorious Captain Joke, a man who broke the seal on a nearby mountain and brought forth the wrath of God. Intent on repaying the villagers in exchange for a free meal, Luffy and Zoro head to the mountain hoping to defeat the monsters and free the village of its curse. However, as each beast’s defeat aids Captain Joke’s resurrection, Luffy and the gang may have bitten off more than they can chew!

Bal, a poor boy living on an island, gets the idea to rig a makeshift boat, hoist a pirate flag on it, and become a pirate to get rich. He takes his pig friend Bu, his sister Muge, and the giant salamander Kuna as his crew. He plans to do all sorts of devious deeds in his quest to become a pirate, but ends up doing one good thing after another. What will Captain Bal and his crew do?

After catching a Spring Shark, Toriko and Komatsu are surprised to see Luffy come tumbling out its mouth. Luffy needs the gourmet hunter help to save a valuable crew member.