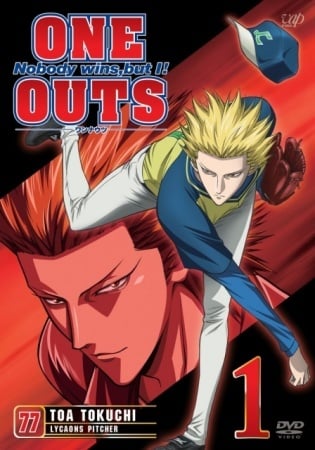 Lounging at my computer waiting for a promised telephone call, I get that unsettling feeling my acquaintance has forgotten, and the risk of disappointment looms ever closer with every tick of the clock. Luckily, I have the final two episodes of One Outs to help kill time; its generic sports appearance notwithstanding, it manages to fill twenty-five episodes with uncomplicated thrills whilst delivering on originality, and is thus effortlessly absorbing.

Superficially, One Outs shares key features with Major, the current paradigm for animated baseball. The protagonists in both adopt a rabble of losers and lead them to victory using inspirational talent and charisma. On a more fundamental level, One Outs opts for a deviant flavour more in keeping with Kaiji and Akagi, essentially sticking a finger up at its host sports genre. To be sure, while Major captures the pure heroic spirit of baseball, One Outs strives to defile it. There are no gallant fastballs to save the day in displays of raw machismo, no epic man-to-man standoffs, only sneaky psychological machinations and lots of sinister smiling.

What’s more, One Outs achieves levels of shallowness which would make even sports anime break a nervous sweat. All the action happens on the pitch, with no surrounding drama and no character development outside of the games. No background stories, no side plots, no diversionary comedy episodes, nothing. As a result, the plot consists entirely of unwavering cynicism, which, although gripping at the start, does wear thin after a while. For instance, when Toua recommends a plan to neutralise their cheating opponents which involves apparently self-defeating actions on the pitch, the diminutive fat-lipped manager refuses. I hoped he was protesting at Toua’s unsportsmanlike methods, making a moral pitch in favour of facing their enemies head-on and winning through passion rather than tricks. Instead, predictably, he turns out too stupid, slow, and corrupt for this to occur to him. In fact, I forget his reasons, they’re so banal.

Having said that, thanks to its curious combination of setting and subject matter, the series still offers goodies for everyone. Fans of suspense will appreciate its brooding, melodramatic style borrowed directly from Kaiji and Death Note (just consider the butch setting as shiny new packaging on the same Madhouse product). Furthermore, anyone looking for effective twists with generous helpings of cheese a la Code Geass should also take a peek. Extreme suppositions abound, like a baseball runner so fast he defies any strategic logic and teams which use outlandish, indecipherable signals to cheat their opponents. Not to mention game tactics based on absurdly precise measurements such as the number of spins on a ball as it flies, high-stake bets at every turn, and an excitable narrator to recount every obvious detail.

In terms of animation, much of One Outs’ strength lies in the design for Toua Tokuchi. A bishie with a demonic twist, his wiry frame, pale rock star looks, and wickedly narrow eyes not only suit the anime perfectly, but continually demand attention. Moreover, One Outs boasts fluid baseball sequences and rich colours as well as detailed environments. Considering it’s a product of the Madhouse machine, this is probably as good-looking as sports anime get.

Nonetheless, there’s disappointingly little artistry evident in the style. Since most of the action occurs on an open, well-lit baseball pitch, One Outs lacks much of the shadowy detail present in Kaiji. Moreover, apart from Toua, the characters look rather nondescript, as though lifted from any number of other shows on the market.

Every episode begins with Pay Money To My Pain’s dark, grungy opening theme, ‘Bury’, which acts as an addictively haunting mood-setter for the narrative. On the other hand, the in-episode accompaniment includes funky beats and string instrumentals with fairly exciting melodies. None of the audio tracks will capture minds and hearts, however, or make for an album worth paying for.

On balance, I enjoyed the characters, with Toua Tokuchi standing head and shoulders above the insipid, caricatured supporting cast. Having more in common with the sociopathic Yagami Light (Death Note) than any heroic shounen archetypes, Toua enjoys toying with people. Whenever possible, he openly hunts for physical and psychological weaknesses in his opponents in order to exploit them. Nonetheless, while his questionable actions make him difficult to identify with, he also happens to fight for the most sympathetic team, which makes him admirable enough. Unfortunately, Toua’s personality falls short in one important regard – he undergoes no development whatsoever, remaining exactly the same throughout and generally failing to fulfil his true potential as an antihero.

On the other hand, the lack of honourable secondary characters appears a glaring omission (more so than in Kaiji) because of the baseball backdrop. In a sports context, most would expect at least a few individuals to have entered the game out of interest rather than for the intrigue. However, with their personalities left wholly unexplored, questions of their ‘interests’ become moot anyway. Furthermore, One Outs relies so strongly on Toua’s strategies rather than the Lycaons’ skill that the other characters become redundant. The supporting cast’s only purpose is to act as cardboard pawns in Toua’s game, to enact his commands, and coo admiringly whenever he hands them a victory. Still, while most of them fly through the story without so much as a witty line or interesting face to remember them by, they function well enough to work in the narrative’s favour rather than detract from it.

Generally, One Outs’ strategy-based content is convincing and the devilish protagonist unique enough to hold anyone’s attention for twenty-five episodes. If baseball or suspense is your thing and you’ve got a few hours to fill (say, you’re nervously awaiting a phone call from an ingrate, damn it), then One Outs certainly delivers a refreshing combination of these themes that’s worth watching at least once.

A fun sports anime in the play-to-win vein of Akagi and Kaiji - these guys want to win so much it hurts. Hagiwara Masato, the seiyuu who voiced both Kaiji and Akagi, turns in yet another great performance as One Out's protagonist Kokuchi, which also solidifies the link between the other two series. However, while One Outs is incredibly clever at times, the experience feels shallow compared to what was done in the series One Outs seems to be imitating. Kaiji and Akagi both had darker undertones that don't have nearly as much bite in One Outs. Also, the series becomes very formulaic near the end, almost to the point of ridiculousness. There's only so many improbable situations that Tokuchi can wriggle out of before the process stops being exciting and just gets tiring.

But I'm complaining too much. Taken as cheap, disposable entertainment, One Outs still manages to be clever and thrilling enough to be worth the watch, provided you have seen and liked the superior series Akagi and Kaiji.

There are multible types of anime, most focus on a person or group and watch them grow while strugling to get past each obstacle (Haikyuu!! for example), there is the type where you have a OP character gets a problem which their power can't solve completly and they have to get help to save the day (Code Geass has this) and there is the type in which you look from the opponents perspective alot and see how diverent people try to take him or her out (Sakamoto, desu ga? is the perfect example of this). There are more types but these are not really relevent in One Outs.

One Outs is definatly the last type.

The main character is very overpowered, he can most anything and can also besically read someones mind. You follow him as he makes a big bet with the owner of the basebalclub, he gets 5 million Yen if he pitches a batter out before the batter reaches the first base but he loses 50 million Yen if he gives a point. With the contract containing more rules which he has to follow the owner tries to make Touichi (that's spelled wrong...) fail from behind the scenes while the MC outsmarst him and the other team at the same time.

The fun of the series lies in how everyone tries to be the smartest and outwit their opponent, using actual human psychologie and emotion to decide what the players are going to do. The presentation is wonderfull done and I didn't get bored for more the a few minutes while watching this (within a day).

The characters are a bit bland, which is quite a shame. But all of them (except the MC) are human and have fear or can be a bit arrogant. I know about 20 characters after watching the whole series, of which 3 are in the baseballteam itself and about 10 players of other teams, most others are just extras and are made to forget.

The opening is great in my oppinion, it's sung in English and builds the series beautifully. Also the music itself was very helpfull (it even hides plotpoints) and is used to make a moment inportant and what is not.

My personal oppinion is that this is a serie for people who like humans. For me (a fan of the psychologie genre) it was candy; helpfull exposition, clues and actual science are all part of what makes One Outs more of a Mind game than a Sports game.

I know nothing about baseball. This anime has a smart character who loves gambling and he gambles big bucks on baseball. This charcter is super smart. I binged it and you will too! I highly recommend despite your interest in baseball.