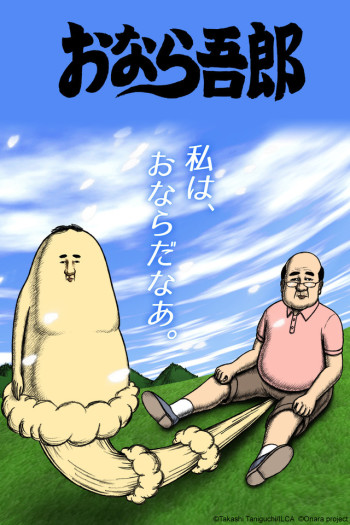 This is why we can't have nice things.

greatest anime ever. a must have to watch.

With zero doubt this is the greatest thing the human race has ever created.

Who are we? Why are we here? What is our purpose in the world? What IS the human condition? Onara Gorou sets out to answer these questions in artistic fasion. With it's diverse cast of characters and episodic nature, it will have you asking many questions before the end, growing spiritually and intellectually along with Gorou and the gang.

Story: within the narrative of Onara Gorou, the nuances are a tad too complex to explain. It's much better to watch it with at least a light understanding of biology and physics, as the show touches on these themes heavily in an attempt to educate the viewer. Beneath that calculating exterior lies a study on human nature itself, and plenty of touching themes. There's even well-placed comedic relief so you aren't weighed down by too much thematic material.

Animation: It is my personal belief that this studio and its executives are creative geniuses. Not only have they managed to subvert animation bumps with their true consistency, but the transitions between scenes are smooth and unjarring. The action is unique, Yutaka Nakamura could take a page from this book.

Sound: I didn't notice anything wrong with the sound, in fact the soundtrack was quite atmospheric and set the "atmosphere" even better than the characters did. Some of the singing wasn't on pitch all the time so that was a bit of a letdown.

Characters: by far the show's strongest point, as new characters are introduced and explored in so short a time its hard to comprehend. The show's use of a single type of character that all look exactly the same goes well beyond expectations as the cast is surprisingly diverse, and everyone has a different story to tell.

Overall it's a good anime to watch if you want something to really make you think about your life.

I don't even have to explain why this is the best anime ever.