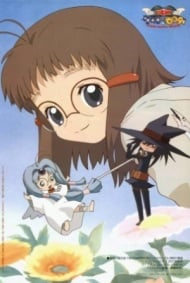 Moe Katsuragi is depressed. She caught the boy she loves in the arms of two others, and she's heartbroken enough that one rainy evening, she wishes she could die. Answering her call is Risky, a pint-sized shinigami who wants to take Moe's soul to the underworld! However, Risky shares his body with Safety, an apprentice angel who wants to help Moe see the errors of her ways and reconcile with the boy she pines for. Torn between hope and sadness, Moe will try her best to win the heart of the one she loves amidst the chaos of her two new companions, Risky and Safety!

You know you don’t have much in the idea department when your ten minute show is three and a half minutes of recaps, intros, outros and previews……on every single episode. Story - 1/10 Risky and Safety are two competing spirits, Risky a apprentice shinigami and Safety an apprentice angel, who one day collide and assume the same body. Each now tries to get a particular subject to either find happiness (Safety) or die and give up their soul (Risky) in order to score points in their respective fields. It’s the old Angel and Devil on your shoulder story, except this time only one can be present at any given moment, depending on their target’s mood. A majority of the show is based around a young girl named Moe. She has a crush on a boy at school, but recently she’s seen him with other girls, she thinks the worst and it’s given her a case of the blues. This situation is what calls forth Risky and Safety, each hoping to guide her towards their best outcome.  After those first few episodes the series breaks off almost exclusively into one off filler episodes. Either covering Moe’s friends and their hidden dislike of each other, Safety watching a TV show and imagining herself helping the main character or the consequences of Safety’s love arrow accidentally striking the neighborhood Pomeranian. Things get back to normal, if you could call it that, when in the last few episodes a full fledged shinigami comes to take care of things. His attempts to bring on mayhem causes everyone within the vicinity to change personalities and become hostile towards each other, but it also causes the two spirits to dislodge from each other, and now on their own both Risky and Safety decide they want to do what’s best for Moe. With so little in terms of a story, and almost seventy percent filler, you would think they could make the main plot different or interesting, but instead it’s completely lacking in all originality. Animation - 4/10 The animation can be hit and miss in this series. There are parts of episodes that it looks pretty decent, and others where characters look as if they’re doodles someone made in their spare time. None of the characters are groundbreaking or original in their design, but they really didn’t need to be, as they played the part they were meant to play. Sound - 2/10 Despite the short run time, the voices in the series all became very trying. That becomes all the more disappointing when you realize that Risky is voiced by Sandy Fox, who sang Kenshin’s “Freckles” theme song, which could be one of the top ten songs in anime history. Safety wasn’t much better, often being comparable to dead cats across a chalk board. On the other end the characters for Moe and Yuya aren’t so much annoying, as they are just dull and lack emotion. Most of the other voices are pretty good, but as they’re mostly there just for off screen jokes and filler, they don’t bring anything to the series. The music felt almost nonexistent throughout the show. There was the dull ending theme and the cute little montage music in the next to last episode, but otherwise your speakers are just blaring out the horrible titular character’s voices. Characters - 2/10 The characters follow the same simplicity that the story did, with only a few ones relevant to what you’re watching. Safety is the kind Angel who does only good and Risky the evil devil, who is also there for comic relief. Moe, the love struck young girl and Yuya the somewhat oblivious young boy. That about sums it up. I give them credit for fitting in all you really need to know. Since Risky and Safety are both new to their trade there isn’t much need for backstory. Likewise Moe’s story is so basic there isn’t need for much into her background either. Overall - 1/10 The show might be decent for those who are very young or not too familiar with anime. While not a great introduction, the simplistic story and constant recaps allow viewers to not lose track of what’s happening. As for those who are seasoned anime viewers, well it’s so short you can use it to break up longer series, as I did, but otherwise I’d stay away. 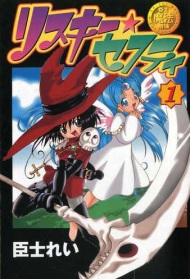