Okamikakushi: Masque of the Wolf - Reviews 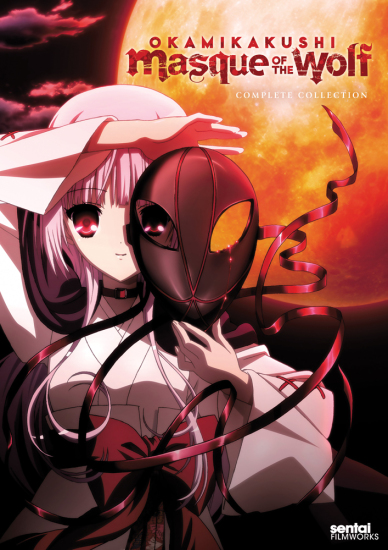 Ookami Kakushi was written by Ryukishi07, best known for Higurashi no Naku Koro Ni. That should pretty much tell you what to expect, since Ookami Kakushi is an obvious, shameless clone of its considerably superior ancestor.

The premise goes as follows. Hiroshi Kuzumi, an unlikeable shota with no personality or spine, moves to a town known as Jouga with his occult fanatic father and annoying Tsundere sister, who is in a wheelchair for reasons that are never given passing explanation in the series. As they are moving in, Hiroshi meets the love interest, Isuzu Tsumuhana, who is supposed to be this series' Rena Ryuuguu despite having none of the likeability or humour that the Higurashi character possesses. For some bizarre reason, Isuzu is obsessed with Hiro, and the rest of Hiroshi's new class follows suit. However, one of them seems a little too attached, and begins to act strangely... then, we see a scene with him being killed by a girl with a scythe. The next morning, a girl who looks an awful lot like the girl with the scythe tells the class that he has "Transferred". Could it be that this town has a dark secret?

If any of this is sounding familiar to you, then you've probably watched Higurashi, because this show is an absolute cut 'n' paste of it, only without any of the charm that made Higurashi great. It lacks the audience mindfuck that Higurashi gave us, completely misunderstands Higurashi's visual style, using all the creepy effects in all the wrong environments, and what seemed loveable there just feels stupid here. It doesn't help that almost every character here is completely unlikeable, being given little to no personality, backstory, or charisma, with only the villain having the latter trait making him somewhat likeable. And even that is hindered by the fact that his motivation is quite generic, and his plan makes no sense.

On top of that, while Higurashi did a good job of tying up the loose ends (with only a couple of details left out, both of which were in the manga/VNs and relatively unimportant to the overall plot), Ookami Kakushi leaves several loose ends, for example, the aforementioned one with the wheelchair, and a character who is hinted to have some kind of disease that is never explained.

The only thing that really redeem this show are the aforementioned antagonist, a relatively decent soundtrack, and the 12th episode, which is a random self-parody special taking place after all the plot is said and done. While it does come off as an enourmous BLAM Episode, it's still considerably more enjoyable than the remainder of this highly sub-par series.

Final Words: A shameless ripoff of Higurashi, with none of what made Higurashi good.

For Fans Of: Higurashi no Naku Koro Ni, Shiki

What a terrible show. It had some potential at the beginning, but it just got worse from there. It was not scary, or even a little creepy. It was just stupid. By the time the show was over, I was asking myself, "that was it?" They knew nothing about pacing. The show ended, but then there was still one more episode. Of course it had nothing to do with the story. Why? What's the point? It's like they inserted filler, but there is nothing left to "fill". It was just stupid.

Man, I really hated the characters. They were just generic and boring. Hiroshi was the worst. Good grief was he annoying. I just hate it when the shy and quite guys get all these girls hanging all around him. If a girl were to just talk to him he would nearly have a heart attack.

I kinda liked the animation. At least I thought the costumes were kind of cool.

I just have one question. What is up with animes showing the ending (it's either the ending of the episode or arc) and then showing the events that lead up to it? They are doing it so often, that it isn't cool anymore.

Being the type that has to finish anything I start, I grinded my self through this one. I have yet to watch an anime to make me quit before finishing.... Anyways.....

City of Hasaki has a secret that a new family moves into. Hiroshi, the main character has the odd chance that 1/100000 he gets to be the lucky guy where all the "Gods" drool over him, and while this is happening some mad guy is trying for revenge. lalala, boring. Who was interesting is Nemuru who happens to wield a huge scythe. Only bonus. Only, unless you count the slut named Isuzu, who drools over Hiroshi like a boss... To be honest, she was the one factor that almost made me quit before finishing it... Anyways..

Decent, just ignore the horrible car effects, and the fact that it's always one car on the road at the same time....

Decent, a few things  that made me cringe.... that annoying slut named Isuzu, and that wretched theme song for "Hasaki" on the tv....

People I could stand- 3

People that made me cringe- alot

Watch it if you got time for a few rare laughs. Otherwise, waste of time.

I picked Ookami Kakushi up right after watching Baka and Test, which I thought was miserably aweful.  So this anime came as a blessing.  At the time it alleviated my misery, and came off better than it was.  However, I think its pretty easy to say that this anime is nothing really special.  Now while I say that, I was able to watch it all the way through pretty comfortably.  This is because I dont care about fan service or tons and tons humor.  I value a well thought out story.  The story here isnt "well thought out", but it was an atempt to pull away from the status quo of sh*tty anime.   To that point I thought this one was better than Baka and Test, however most people would not agree.

Ookami Kakushi doesnt make you bleed for more, however i was still interested.  I kept watching little by little, able to enjoy the ride for what it was worth.  What this story had, WAS A STORY, better than most anime can say.   I have become sick of the fanservice anime that focus on 'cool' undeveloped ideas, fancy animation, and overbearing humor over story and character building.  Anime like this got the shaft because the animation wasnt great and because of the flaws in the story.  YES, there were flaws in the story, BUT at least they tried. At least they put a kinda sorta decent story in front of me.

here is a quick comparison of what I liked and didnt like:

THINGS I LIKE ABOUT THE ANIME:
-they pulled off a somewhat ok story in 12 episodes, when some cant even do 24 to 50 episodes well.
-A coherent story (in other words there was a sequence events and a clear causality to things)
-story addressed some issues well ( it started solving the issues that Shiki failed miserably on)
-the main character grew some balls now and then
-had humor in satisfying amounts and didnt overuse it
-animation was ok half the time, certain scenes had a little work put in
-the artwork was nice
-decent music, noticable at least and used at the right times
-they did a "wrap up" episode at the end for humor and to settle my feeling on the anime. which was nice and didnt interrupt the story like a true filler would.

THINGS I DIDNT LIKE ABOUT THE ANIME:
-flaws in the logic of the story (it started solving what Shiki failed on, but still had fall-throughs of its own)
-story was not epic enough (Shiki, at the least, was epic AF)
-most of the time the main character was a bitch
-some part of animation were nice, effort put in, however it was NEVER outstanding.
-not enuogh music, eventually became repetitive.  None of the music was outstanding. (though this is a 12 episode anime)

Story: was ok, nothing new or special.  It kept me interested enough to finish.  There were some obvious holes in the logic of the story, but which anime doesnt?  Though not as bad as Shiki's though, but maybe that is because Shiki was more epic, and had a larger scale, so it was more glaring.

Characters:  I dont know how to explain this.  The characters were your average run of the mill anime character types that you see in every anime.  However their development together was not as flat as that.  There was development of some kind.  It just wasnt amazing or anything.  the main character was a bitch, as usual, which I hate.

Overall:  Dont worry about watching this one. Could be worse.  Could be better, but one thing for certain: I would rather that anime like this, that tried for a story and character development, get better rating than sh*t like Baka and Test.  However, I want to see even anime like this shoot for more than what it did.

So another one of my reviews, this time for Ookami Kakushi.....so this was an anime that I watched for the monthly marathon on the forum and to put it bluntly it was pretty average. The basic story reminded me of a story/arc maybe in Gosick with the theme of Pandora Hearts, but it was to be honest all over the place. The story,well it wasn't great and to be honest I wouldn't class it as a horror but I managed to get through it.

The animation, I loved it.....I found that the detail in the character designs were pretty good. The opening animation fitted the theme of the anime and then again so did the ending. The music was just as you would expect it, dark and mysterious... The opening and ending was quite simple but fit the purpose quite well.

In conclusion this average on the horror side (as even I could sit through it), but it is only really if you want to watch a light horror but mainly a mystery anime. Overall I gave this anime a 6.5 for reasons I have stated. And so that ends it.