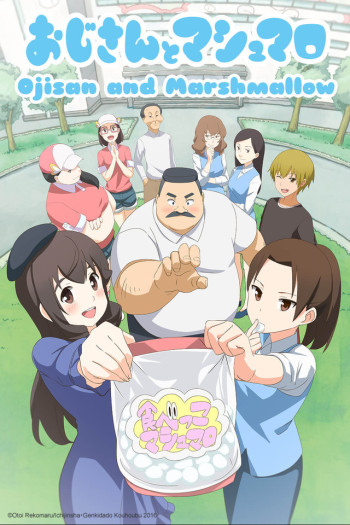 Watching this anime actually reminded me of these marshmallows I bought from Korea. They had grape jelly in the middle. So, maybe, the obsession with marshmallows is because they are way better than the puffs we get here in the States? But that's all irrelevant to whether you should watch this anime. So, onto the review!

Story: The story is pretty simple. Girl likes guy. Girl is a conservative Japanese business woman so she's not going to confess to guy. Girl knows guy likes marshmallows and apparently tries to Pavlov her way into his heart. (If you don't know Pavlov, he trained dogs to drool on command by associating food with a bell. It's called conditioning and is a weird thing the brain does) There are other small subplots, like the "fairy" of the marshmallow factor, but for the most part, very simple plot. There's some decent comedy, though.

Animation: For the most part, the animation is also simplistic. There are times when the animators went hogwild with style, especially in the first few episodes, but for the most part, it's all very near lines and not a lot of detail. Still, the style lends itself well to the simplistic plotline.

Sound: Did you know marshmallows have a sound? They do.

Characters: There's 3 main characters, a lot of sub characters, and not a whole lot of depth to any of them. For a comedy, that's great. For a romance, that's not so great. There's one character that's introduced later on that I found particularly annoying, but you'll have to watch the show to figure out why. (I ain't spoiling nothin!)

Overall: Marshmallows. I want some.

I don't usually laugh easily, but this show is just amazing. I love the way Wakabayashi visualizes her love to Kusaka and the way he looks at marshmallows.. haha! I wish the episodes were longer, but it was enough to make me happy. I really recommend this show to anyone. Who knows, it might just lighten up your day during this rainy spring.

Notes: I only put 7/10 in story and sound since I don't think you can evaluate those points further in 3-minute-episodes. Thanks and props to Creators in Pack.

Should you watch: yes

Ojisan to Marshmallow was first a comedy manga that was published online. Because of its massive popularity they gave it a 12 episode series, each episode lasting about 4 minutes.

STORY: This comedy romance that is located in the work place is done really well. While watching the first episode I laughed within the first minute. I don’t know of a single anime that has done that to me. Just when I calmed down another funny moment occurred and was set to say that this is going to be the best short anime I have ever watched. Sadly though the romance jokes do get a little old, but overall the anime is really funny.

ANIMATION: For a short it really good, but compared to other 20 minute anime it is just average.

SOUND: while there are some good setting songs such as the song during the rain scene, the ending song is bad (no intro).

CHARACTERS: This whole anime relies on the characters. Habahiro Hige, a fat, most likely middle aged man who is kind of aloof and love marshmallows was really funny. The best character is the other main character, Iori Wakabayashi, who loves Hige unconditionally. While there isn’t any character development I somehow didn’t care.

OVERALL: I give it a 8 (top 25%). If you want to watch a funny short comedy then look no further. If the fact that it is only 48 minutes total is off putting, then that might be a deal breaker. At least just check out the first episode as it is the best one and I still can’t stop laughing.

What I Liked: The contrast between the simple-minded Hige-san and his pursuer, the straight-laced but strange Wakabayashi-san. The animation is clear and consistent. Episode 9's ending theme "Watashi wa Idol... degasu." fits Mioko's character to a T.

What I Didn't: Everything about it is so average and possibly forgettable. It's easy to interpret Hige's character as another cliched fat man, considering half the comedy is based on his love of marshmallows. The post-credits live action scenes, while cute, were severely underutilised.

Final Verdict: Sweet and fluffy like its namesake, Ojisan to Marshmallow is a simple office rom-com about a pretty lady who loves a chubby older man. Also like its namesake, the animation is soft and there's little to no substance of plot or character development. Still, it's a safe little series if you just want something to snack on.