Oh! My Goddess: The Adventures of Mini-Goddess - Reviews 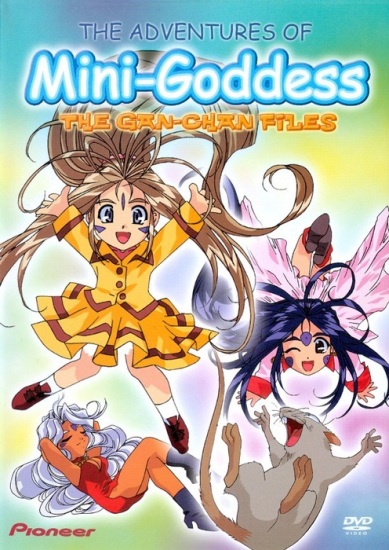 Even with as many years as I've watched anime, I usually refer to this series as "Ah My Goddess-on-something" just for fun, because that's exactly how it presents itself.  Considering I'm of the generation where the first series to relate to anything Ah My Goddess was the OVA series, I came into this not expecting much, but what I didn't quite expect was the format and short nature of the episodes.

Goddesses Belldandy, Urd, and Skuld are in SD (read: super-deformed) form in a series of abbreviated, one-shot episodes which chronicle their adventures with friend, Gan-chan, a rat that seems to have an oafish demeanor. You get the idea it's supposed to be centered in situational, simple humor, particularly focusing on some subtle Japanese jokes that I actually understood and found myself smiling at.  Yet, as far as parodies go...this one doesn't really have much substance to it.  Neither does it hold up in overall story format. The humor itself might be too juvenile to appeal to a more seasoned anime viewer, and to those who are new to the series, might just think this were a kids show.  Perhaps that's the main issue of what this series failed to do...establish its target audience.

Honestly, I'd give this series credit because it does introduce the characters in a more humorous light, even making fun of some of the character flaws that the girls had in the original OVA series (note that this was created well before the TV installments), but if you're looking for anything made of substance, this will probably not be your cup of tea. There are a dearth of linear stories here, but most are so short, you don't really miss them, so it's a give and take as to what you can pull out of this series.

My advice, if you're looking for a story, stay far, far away from Adventures of Mini-Goddess. If you're just looking for a quick watch with some random craziness, I'd still be hesitant before you try this.  I would venture to say you'd have to be a pretty avid Ah My Goddess fan to really enjoy this...or else know about Japanese humor to catch the references made throughout the series.

I'm usually not one to say that animation is bad in any series, but here, I would say it does show its respective age in the rudimentary character designs and subsequent cel production.  Granted, I don't think this is supposed to be the cream of the crop from an animation standard regardless. The SD character designs are one indication of that, but at the same time, I'm taking into perspective this is a series that's intentionally drawn the way it is for a reason. At the very least, the coloring is well done for the most part and the character designs are consistent.  This is not Pugyuru, which has a method behind the rudimentry character design to ellicit humor. I suppose with this, the only measure meant by the animation to do this is shrinking the characters down to mini sizes and having them go on "big" adventures in contrast.  Consistent, not badly noted, but just doesn't really stand out.

Not terrible, but largely unmemorable music is featured in the scheme of this series.  I'll admit, the very first ending song of this series I liked because it was, by my own words, "cute".  "Denwa wa Shite Darling" is a bit of a love song in and of itself, as is the second ending "Kiss Kiss Kiss", which is considerably more catchy and upbeat. I think in the moment they were a pleasant listen, but they aren't themes that you'll take with you.  I barely remember any BGM here, though I know it was present in some of the episodes for humor's sake.

Honestly, not much character development in the scheme of this series.  I think the series isn't meant to be a comprehensive one that develops the characters as much as it pokes fun at them and places them in the heart of events that perhaps someone who's young (or young at heart) could enjoy.  I'm all for series that are kid-based in nature and can truly poke fun at itself in its references, but I didn't find i more than just a standard, momentary laugh in places here.  It doesn't give you the fits of laughter that series like Minami-ke, Azumanga Daioh, or even Lucky Star might elicit if you watch them, it's a bit younger in humor than that, which goes into where I mentioned this series doesn't establish its target audience all that well.

Belldandy, Urd, and Skuld really aren't different from their series counterparts in overall construction, but they take on a more child-like demeanor in the scheme of their cookie cutter constructions (Belldandy-the good one, cooks and cleans, Urd, the bad one,  and Skuld...just the young one).

Gan-chan actually made up the bulk of the laughs that I had from this series, primarily because I knew his voice actor and I could laugh at his over the top antics.

It's very difficult to recommend this to anyone because it's just not that memorable a watch.  I think I'm likely to say either try it with caution if you're open-minded enough to give it a shot, because its short length proports that you could breeze through it in a day, but overall, it doesn't really resonate with you beyond the initial watch to make you want to see it again.