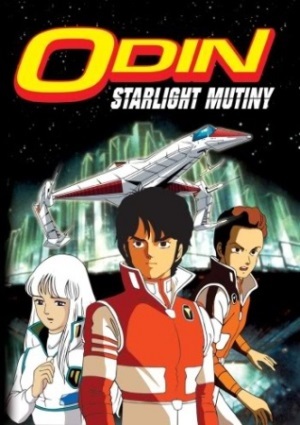 Story
I've read my fair share of reviews for Odin, all of which give it terrible scores. I'm talking Angelique or Wild Cardz terrible. All of these reviews had one thing in common -- they all had watched the dub, which has about 40 minutes of the 2 hour 15 minute Japanese version removed, supposedly significantly cutting down on the story. I, on the other hand, did watch Odin in its original form, so I can only imagine that either A) the subtitled original version is a hell of a lot better than the dub, or B) strange parasites invaded my brain (presumably from that sketchy Mexican food I hate recently), causing me to believe that a truly suckass movie was a lot better than it actually was. I'm inclined to go with A, but who knows?

Odin is a very interesting sci fi story that is heavily based in Norse mythology (which is rare in itself). Without spoiling, the story revolves around a young woman named Sarah, who the crew of the Starlight find on its maiden voyage. Through a series of events the crew discovers a long lost alien secret that involves all of humanity and its origins, prompting them to find Odin, the mysterious planet itself. The story of Odin really is based on a few things: the first stage is them finding the girl and learning the secret, the second is the decision to venture to the planet and/or travel time, and the third is arriving in the area, who and what they encounter, and a few various other events. I found the story itself to be really interesting, though perhaps a bit cliched as far as sci fi goes. Nevertheless, i found the premise to be exciting (as I do with most sci fi), and can only predict that other reviewers disliked it because the dub cut out so much of the story, perhaps making the premise much more confusing. Especially with the inclusion of Norse mythology, I found the plot to be solid and likeable.