Alt title: Hottarake no Shima: Haruka to Mahou no Kagami 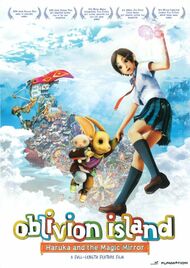 16-year-old Haruka is on a mission to find her mirror - a precious childhood gift from her mother that mysteriously disappeared. While following a strange foxlike creature in the woods, she tumbles into a mystical world where once-cherished toys and treasures go when their owners neglect them. Join Haruka and her new friend Teo on a roller coaster ride of adventure as they contend with the island's greedy ruler - who wants the mirror for his own evil plan!

I used to love watching this movie when I was a kid ,so much so that my mom bought the dvd pack so  I’d stop bothering her. I think it’s a great movie for kids. But just to let you know their are some moments in the movie that might be a little disturbing. ~SLIGHT SPOILER AHEAD~ For example when Cotton (the lamb doll) gets cut open. It might just be because I grew up on this stuff but I love the movie.