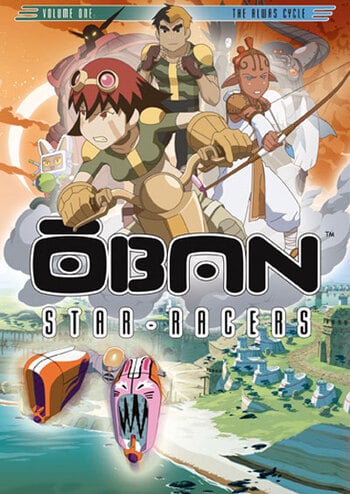 In the 21st century, mankind has finally expanded its reach into the corners of space. After a narrow victory years ago against their enemies, the Crogs, humanity’s peace is again threatened – but this time, they are saved from an external force known as the Avatar. He offers them a chance to enter the Great Race of Oban and compete for the ultimate prize; and man, with the alternative of defeat at the hands of the Crogs, enters. Meanwhile, Eva is a young girl whose father, the famous race manager Don Wei, left her alone in a boarding school years ago; and she has not heard from him since. Upon tracking him down, Don does not recognize his daughter and treats her harshly; so Eva dubs herself Molly, gets a job as a mechanic on the team, and ultimately tags along with Earth’s star racing team to participate in the Oban Race. Fierce opponents and racetracks stand in their way – will Earth’s team be successful?

Story: Oban is actually a pretty archetypical story about a girl trying to find her family, racing, love triangle, blah blah blah.  While it is a pretty common basic line, the creators did a fantastic job mixing everything up and ending up with a coming of age story with sci-fi elements, romance, adventure, and lots of interesting turns. I'll be the first to admit that it seemed to go on for a while, but it was overall incredibly enjoyable.  Eva/Molly is a bit of a brat sometimes, but I couldn't help but feel for her as she realized her father didn't even recognize her, even if it had been ten years. And then the plot twists!  In the interest of trying to be spoiler free, I won't go too much into it, but the story kept me guessing but still didn't go too far out of the realm of possibility, and picked up threads I'd thought were long forgotten in time for the big finale.  At the end, I really had to fight back the tears. Animation/Art: Oban did really well in a traditionally taboo field of mixing 3D with 2D animation, something I generally detest.  The 3D models were set in 2D backdrops, their toon/cell-shaded style almost perfectly matching the animation style and used in a consistent (but moderate) manner. While the style itself is really simple, they pulled it off very well and managed to make everything incredibly expressive with so few details.  I am also very impressed with the character designs and backgrounds. Sound: The music is pretty good, although it can get a bit repetitive and in some places I thought should have added more music, but the ending and opening themes fit so well (from what I could understand) with the show that I didn't skip them as I normally do when watching an anime.  I'm seriously considering buying the soundtrack myself. Characters: Again, pretty archetypical:  The best friend mechanics- one geeky and the other pretty macho, the super manly samurai-esque star racer, the controlling overbearing manager/father, the clueless irrational cuddly soldier, the gentlemanly prince, the charming spunky girl hero...  However, the characters were fleshed out very well, even the side characters with little to no dialogue I found myself wanting to know and hoping they would survive. Overall, I suppose that many people probably wouldn't like it, but I found this to be a highly enjoyable series, with characters I loved and a story and designs and art that I just can't find words to describe just how amazing they are in my opinion.

I’m not to clear on the storyline much, though it is rather original to a point. It’s about a girl trying to get her father to recognize her when she was pretty much forgotten. The story is actually rather strong, even creating an ending that someone wouldn’t suspect. It’s rather deep and meaningful for a child’s show. Eva is strong headed and rather pushy, yet she always thinks with her heart and not her head when things should be rather technical. She also seems to be hot tempered as any little thing seems to send her off her seat. Probably because of the Daddy problems. She is a lot like Luke from Star Wars in that she has problems with it. She also has a little Yoda character in Satis. He shows up whenever he wishes and gives some good advice. Unlike a lot of these shows, this one doesn’t have everything go smoothly all the time which means you never really know what is going to happen mostly. It can keep you on the edge of your seat when it happens. Normally in Race type shows, the main character wins without any really big problems or problems he can overcome right away. I don’t much like racing shows and was about to put this on the dropped folder after about three shows but this did get much better. I urge those who don’t really like sports or racing shows to at least try it out. I think it was after the 5th I felt more like I was watching it for the show and not just to review it. The artwork is a bit off in a sense, making the characters look like they have no nose even when in profile view. The characters also have very large ears with no detail in them at all. They feel like they are rather flat. Characters pretty much have all spiky hair. I’m not sure where Eva got all the marks on her face, a star and a line. It just doesn’t look right and is rather distracting. The backgrounds aren’t even that well textured. This show is low on artwork but it makes up slightly for it in that it’s original. The racers feel a lot like from Star Wars including the sounds as well. The track also looks like it’s from Star Wars and I can’t get the feeling that I will be seeing Skywalker at any time. Strangely, the artwork and the 3D art work perfectly together. The English voices are alright though not really standing out to me. They all feel just a little flat. I cringed a little at Eva’s voice, a rather raspy version of a child’s voice. She also seems like she has a small lisp. The jokes make some of this feel a little hard to get into more. The opening on the other hand is actually rather cool sounding in the English dub though I know it’s not the original. 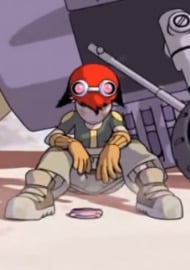