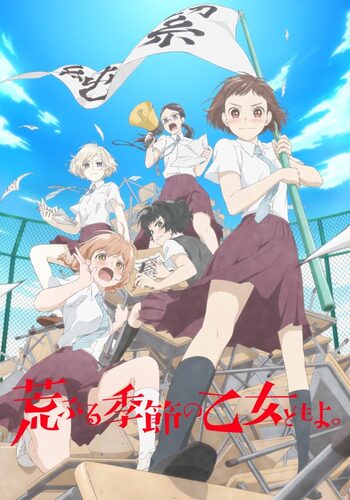 If you're looking for anime similar to O Maidens in Your Savage Season, you might like these titles.

Both of these anime break away from the typical anime romance where they don't talk about sex at all or the finer points beyond being afraid to confess. They tackle all the embarassing issues of adolescents becoming interested in the opposite sex in such a relatable, heart-wrenching way and they both do it with a variety of characters going through a variety of feelings so it makes sure to cover them all. In O Maidens the characters all interact with each other and their friendship is also a big part of the plot and drama where as in Tsuredure Children they are isolated pairs of kids that the show switches between, but watching the progress feels similar.

Both follow girls troubled by love and both are qute entertaining to watch... But tsurezure children is a bit more light at heart indefinetely

If you're a sucker for bittersweet romance, you'll like this show. Similarities between Scum's wish and O Maidens: an unabashed, but not crude discussion of sex, unrequited love, coming of age, an LGBT storyline, and just the general feeling that romantic and sexual desire are complicated things to untagle when you're a teenager.

Both Scum's with and O Maiden's deal with teenagers discovering sexuality, sexual desire, LGBT stories. Some of the relationships themselves are quite similar. Both can stir up some nostaliga for feelings you may have had in the past.

Although O Maidens in Your Savage Season has just come out there are already simmilarities between it and Love Lab. Both show a group of girls interested in romance, love, and sex. The discussion also often times take place in an afterschool setting. Both animes are light hearted and funny with a splash of romance to keep you hooked.

While Naisho no Tsubomi is a 3 episode OVA the main concept is the same, so if you've seen one and enjoyed it than you'd probably like the other

Some attributes both series have in common for instance is a student developing a crush on their teacher as well as blackmailing the teacher on occasions. Aside from this, the anime also discusses sexuality and coming of age.

Beautiful high school girl named Satou Matsuzaka believes she has finally found the meaning of love when she begins living with a younger girl. Previously, Satou never refused the advances of any guy around her, but that changes when she meets the girl Shio. The background and age of the mysterious girl are unclear. When Satou is with Shio, she experiences a very sweet feeling, which she understands as love. In order to protect that feeling, Satou is willing to do anything, even if it means committing murder.

Much like O Maids in Your Savage Season, Happy Sugar Life's about following different characters that each have their own definition of love much like how each member of the Literature Club in O Maids each go about their awakening in different ways. Both series are not easy watches, but it is insightful.

Both series are primarily school romance series with drama.

- one of the characters has a crush on a teacher

- the main characters are in the literature club

Savage Season focuses on five different girls and how they experience romance whereas DomeKano has a boy as a MC and focuses mainly on the relationship with his two step-sisters.

Both of these shows handle themes of puberty and overcoming the struggles of entering adulthood in very mature and unique ways.

Yuu has always loved shoujo manga and awaits the day she gets a love confession that sends her heart aflutter with bubbles and hearts, and yet when a junior high classmate confesses his feelings to her...she feels nothing. Disappointed and confused, Yuu enters high school still unsure how to respond. That's when Yuu sees the beautiful student council president Nanami turn down a suitor with such maturity that she's inspired to ask her for help. But when the next person to confess to Yuu is Nanami herself, has her shoujo romance finally begun?

These series involve high school girls learning about love while discovering themselves and their sexualities. One-sided romances, love triangles, and teenage awkwardness can be found in both.

Galko, Otako and Ojou are a trio of unlikely friends in high school with three very different perspectives. Each episode embarks on a day in the life of a trendy girl, an otaku, and a lady, as they discuss their “girl problems.”

Both anime talk about puberty. Oshiete, Galko-chan! is more comedy based while O Maidens in Your Savage Season is more drama focused.