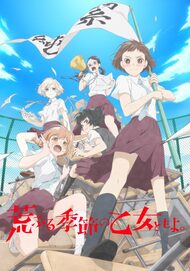 O Maidens in Your Savage Season was initially a difficult watch for me. It made me uncomfortable. That discomfort however is a reason why the show works, at least for the first half. It's a coming of age story about girls discovering their sexuality, it's supposed to be uncomfortable. Despite my personal discomfort this was a very good show and would have easily gotten an 8/10 for me, but it unfortunately dropped the ball in the last four episodes. By episode 8 the story starts introducing more plotlines than can actually be handled in a show of this length. Several of our main character's plot lines are barely addressed in the ending of episode 12. There is no resolution to their troubles despite them being the most confused characters in the show. You simply can't have a show about growing up that introduces story lines some of the characters go through and then not properly resolve them. Not only is it unfulfilling to the audience but it misses the whole point of the show. Credit where it's due of course, the other three characters had well done stories that were resolved by the end. We've all seen the will-they-won't-they childhood friend romance, the crush on teacher, and the puritan girl story lines before, but adding in the subject of sexuality was a bit of a unique twist. Each of these tropes were interesting to watch with the way these characters were written and how they were framed in the story. Seeing the puritan girl come around to the idea of a relationship was my personal favourite of the three. I just wish the other two character's had been treated the way these three were. One of my biggest issues with the story is a difference in episode 11 and episode 12. *Minor Spoilers* here for those episodes. Upon one of our main characters being seen in a red-light district with her boyfriend in their school uniforms the school suspends them facing expulsion and proceeds to ban all non-platonic contact between male and female students. This is treated as a serious event in the narrative of the story due to how it affects several of our characters as well as the couple who are about to be expelled. We as the audience are meant to view this new event much like how our characters do, an unfair and unjust change.However, this gravity of the event is all but erased in the very next episode. Our main group of girls, in retaliation to the unfair ruling of the school administration and the expellation of their classmate, take a teacher hostage that night, send the other teachers and principle a list of their demands, and threaten to throw the hostage teacher out a window if their demands aren't met. Instead of dealing with the situation seriously the other teachers decide to go to bed and handle it in the morning.This is a ridiculous lapse in logic. You can't have the school administration treat one situation very seriously and impose a dating ban due to it just to have them ignore a hostage situation. Would the girls have actually thrown the teacher out the window? Probably not. Is this a far more dangerous and serious situation than two students being seen in a red light district? Yes. The teachers either needed to respond seriously or the set up for the resolution for the drama needed to be different. It's logically inconsistent to have it two different ways. The logical inconsistency in the last couple episodes as well as the lack of resolution for some of the characters made what was a great story into one that wasn't that great. If the story had kept up with the well written character drama that it had been for the first episode this would have been an easy 8/10 story wise. Considering the last four episodes I can only rate it 5/10. The characters are still great for the most part despite the story writing taking a dive. Some of the characters are unlikeable, and can even be despicable at times, but they're well written with understandable motivations and actions. 8/10 The animation and sound is nothing special. It's not bad, even nice at times, but it's not going to stand out from any other romance drama. The opening song was quite catchy. 6/10 for both. Again, I would have rated this show as an 8/10 if not for the mistakes and, frankly, angering decisions in the last couple of episodes. Would I recommend other people watch this show? I do think there's a lot of good stuff here, so yes, and it has it's fair share of good comedic moments and timing. I'd warn that the ending is less than ideal though, and it's certainly not the best show around.6/10 overall.

I have no clue why characters are hated for the way they open up to adulthood and their views on sexual behavior. I liked this anime because it was realistic to how one would feel, disgusted. However, there are points of this anime that I can't really explain. Actions some characters took when faced with a situation with the one they "love". Regardless, the anime was decent, it has a unique outlook on love.  If you are interested in people who slowly open up to accept feelings, with certain other individuals. Along with comedy, and overreactions, and of course, unfortunate coincidences. Then this anime is for you. I would say, this anime is hard to binge, it took me about 3 stops, before finishing it. There just isn't enough spark between the characters and plot.  Overall, 7.5/10, it was an okay watch.

Araburu Kisetsu no Otome-domo yo, or O Maidens in Your Savage Season, is another series I've been watching for a good while. Based on the manga series by Mari Okada, the series revolves around a group of high schoolgirls attending a literature cub meeting and reading books that would otherwise be considered raunchy if not for the fact that they had become classics. As a way to break the ice, each girl is asked what they wanted the most in life before they died, and one girl's wish takes the girls on a journey through the awkward stages of adulthood.   The show isn't that much of an easy watch. To me, there are many moments that can be cringe-inducing, and uncomfortable. But...that is *exactly *how it's like to grow up. You start feeling the changes taking place in your body; your hormones start acting up; you may start picking up on things that you hadn't before, etc. For all intents and purposes, that is where the show shines. Growing up sucks. Let's all be honest with that statement. How each girl copes with it is also different.   The protagonist of the series, Kazusa Onodera, is absolutely terrified by the concept of sex, but it becomes even more complicated when she realizes that she was in love with her childhood friend Izumi Norimoto. However, I feel that because of her mind being too preoccupied with the latter, that often comes into conflict with her progress in forming a relationship with Izumi. This is one of my main gripes about the series because while it's apparent that the Izumi x Kazusa relationship will take up a majority of the plot, especially how we now have a third wheel coming into play, but because I find nothing to latch onto, I can't bring myself to care for whether they become a couple or not.   Niina Sugawara is considered the crane of her class because of her fair appearance. There's some interesting things to her such as her having taken an acting class or how she can read into people's deep desires, but there is also something...disconcerting about her. Later episodes give more insight into this, but she is still a pretty weird girl. Unlike with Kazusa, though, Niina is more open to her wants and desires which often led her into receiving attention from creeps.   Momoko Sudo is Kazusa's childhood friend who also shares her fear of sexuality. At first, I felt that there wasn't much to her character, but one of the later episodes implicates that Sudo may be shifting towards having feelings for unconventional people, judging by her interactions with Niina. This might prove to be interesting.   Rika Sonezaki so far is my favorite character. The president of the literature club, Rika at first comes across as a prickly young lady who judges other girls as being harlots. Yes, while she started off being unlikable, it is actually her interactions with another student Shun, and she started to develop. I'm serious, the ending of episode 5 is one of the most beautiful moments I have seen in a long time.   Lastly, there s Hitoha Hongo who is an inexperienced author who also writes more...lewdish works. Because of her inexperience in regards to sex, her writing can at best be taken as the writing of a middle-aged man. I am so far loving her interactions with her teacher. Of course, nothing comes out from that, but it is nevertheless sweet. There are other characters such as Izumi who has a deep, deep love for buses and transportation (to the point that the first episode ended with the memorable WTF moment); Yamagishi who became the advisor of the literature club reluctantly; Shun, a young man who treats Rika with dignity; and others.   The opening and ending themes are also fairly good. Voice work's good. The animation is also decent. There are some moments where it feels that the animation and lighting are delicately crafted. Overall, the show is not necessarily one of those must watch of the season, but the growing up aspect of it really resonates. 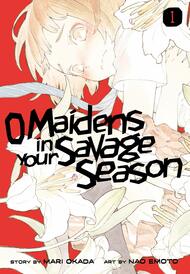