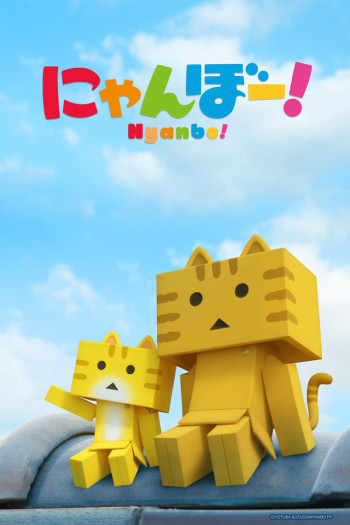 The characters can be kinda annoying but other than that, Nyanbo! is pretty good.

*Warning: rating and review are only based on the first three episodes. Will be updated after finishing or dropping the anime.*

I've yet to read/watch Yotsuba&! so I didn't realize this is a loose tie-in. Truthfully however, that information is not really necessary to appreciate this show. Basically it's a about cat creatures that look to be made of cardboard trying (or not trying depending on the character) to find pieces of their UFO so they return to their planet. As of the third episode it was also revealed that all but one seem to have lost their memories.

I found the three episodes so far to be cute, fun, and interesting. While nothing spectacular, I'm invested in seeing if they'll complete their UFO. The most interesting aspect though, for me anyway, is the animation style. The show is made up of CGI Nyanbo against video of real places and creatures. A live cat harasses them a couple times and the best scenes are when they are outside next to flowers, etc. The real footage and CG effects are for the most part mixed together very well. There's been nothing that stood out in a glaring way thought the scenes with the cat are clearly set up with some kind of green screen item or the equivalent.

All in all, a fun little series that makes a good change of pace from some of the heavier shows this season.