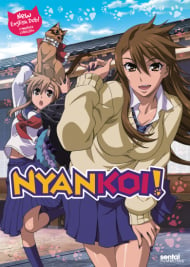 Everyone around Kousaka seems to adore cats, but due to his allergies the teen can’t stand them. So when he wakes up one day and can hear what every feline is saying, Kousaka is annoyed to say the least. His new “gift,” it seems, is the result of accidentally breaking an enshrined statue of a cat; and what’s worse, Kousaka must atone for his sin and appease the vengeful spirit by aiding one hundred kitties-in-distress, or become a furry feline himself! Now, amidst helping various cats with mundane and trivial issues, Kousaka must try to dispel the jinx and attempt to salvage his self-respect – not to mention his love life - along the way.

StoryListen to the background noise in ISSUP (the international study of something umm.... perverted) long enough and you hear the same anime show names banded about after a while. From Strike Witches to Queen’s Blade, I usually end up watching them all for the “lulz”. One that really caught my eye, however, was the amusing sounding Nyan Koi: an ecchi romp that comes with more than its fair share of delightful cat ears. Telling the tale of the unfortunate Junpei Kousaka, the show revels in this poor guy’s misfortune. After knocking the head off a neko-statue, he is cursed by a deity and told he must both worship cats and also appease 100 kitties or he will be turned into a feline himself! This plot line takes a backseat to the developing harem Junpei finds forming around himself, even though he is only interested in the coy Kaede. Addressing all aspects of male fantasies, the barrage of moe, tsundere, kindergarten friend and twins that the unappreciative male finds flocking to him somehow seems more believable than many other similar ecchi titles. As the episodes tumble aside effortlessly, the writer's come up with new and creative ways of torturing the poor protagonist; from an aggressive challenge from tomboy Nagi - who suddenly takes a liking to the curvaceous Kanako’s sweater-puppies, to the mysterious twins with contrasting personalities who both love and hate the brow-beaten schoolboy, Junpei's misery is what makes the show so humorous. Although Nyan Koi’s strange pretence eventually transforms into a typical harem, its friendships and group dynamics are what keep the show a step ahead of the competition. Although there is a sense of “been there, done that” with certain romantic aspects of the show, an abundance of bizarre genres save Nyan Koi from becoming a bland snooze-fest. The typical swimsuit and hot spring features are redeemed with magical girl transformations and moments of outright ecchi. It is often the small things that stand out, and usually the perverted ones at that, but a series that makes you laugh out loud is definitely not one to be ignored.AnimationFocussing on the main characters, the animation is gorgeous; their subtle, feline like eyes or the cute neko-style top lip give an unmistakable kawaii flavour, usually reserved for catgirls in ecchi anime. However, there are moments of slippage, when faces look extremely sketchy and rushed. This is usually redeemed by the use of very successful comedy reactions, in both humans AND animals. The backgrounds are highly detailed and compliment the brightly coloured foreground features perfectly, especially in some of the fast paced scenes that make excellent use of CG effects.SoundI’m really not a fan of music used in harem or romance shows – the whiny, girly tones just aren’t for me. Luckily, the generic fluffy crap is reserved for the OP and ED and so is easily skippable. The ongoing use of “Chopsticks” in the background is cute and fits the slow-motion comedy scenes perfectly. Ultimately, what stands out for me in the audio department is the excellent voice acting; care and consideration seems to have gone into each seiyuu, so they make the personalities of their assigned characters simply shine.CharactersAs someone with Neko-phobia, I can totally relate to Junpei’s awkward predicament. Being forced to revere cats so that he doesn’t transform into one would be an utter nightmare, but he handles it well, especially considering his allergies. Starting out as somewhat of a distant and cold character, his experiences with kitty-kind soon warms his heart and helps to guide him through the tricky minefield of high school love. Feeling sympathy for the poor guy, it seems the more girls he meets, the more people there are to kick his sorry ass! By far, Kanako was my favourite character. Her tough exterior and gross make-up is a thin shell to hide the lovelorn girl within, and it is this vulnerability that gives the tsundere a lovable side. Her transformation into a gorgeous, buxom babe is perhaps predictable, but not unwelcome. Kaede is a typical ditz who seems to be picked up on every guy’s skirt radar. Although she is a little flaky, her reactions to Junpei are often hilarious and not as annoying as some other female harem characters I could name. The other half of the cast are made up of the pet kitties belonging to each human character. Their personalities are as diverse and colourful as that of their owners, and this only goes to add a new dimension to the humans as it seems their inner monologue has substance. Often short and cutting, the cats seem to hoard the best one-liners in the show.OverallAs a dog lover, I really have no place enjoying Nyan Koi quite as much as I did; much of the comedy is aimed at cat owners who will truly appreciate the aloof nature and stereotypical actions of the feline stars. Still, the humour is easily accessible to everyone, especially with the addition of the diverse female harem (and accompanying kitties). Amazingly cute and continuously funny, Nyan Koi suffers from a few forgivable flaws. Overlooking the blemishes, the show avoids being a typical "boy surrounded by a host of beauties" and brings something new to the anime world. In short: if you love pussy, I highly recommend this show. =^.^=

You might wonder... is this worth watching? It has cats!Yes. If you want to see cats, it has cats.If you're hoping for anything else, well you have a bunch of generic harem cliches and a plot that goes pretty much nowhere.Are the characters interesting? No. Are their simple archetypes used to bring, new refreshing development to old stereotypes? No.But... does it have cute cats?Yes. The cats are this show's saving grace. If all you want is cute cats hanging around boring humans, by all means, enjoy the cute cats. 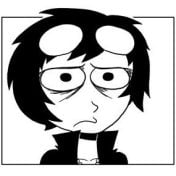 Nyan Koi tells the story of Junpei Kousaka, an unlucky guy who manages to break the head off of a cursed cat statue and is sentenced to help one hundred cats, or be turned in to a cat himself. Oh, did I mention he is deathly allergic to cats? So Junpei is forced into helping animals he can never get close to with whatever problems they might have. Generally the problems are pretty simple; I'm lost, My owner put me on a diet, write my master a thank you card. A few of them are more interesting though. In my favorite episode, a cat wants to get in shape to impress the cat he loves. This leads to a few Rocky like moments and a nasty prank when Junpei ignores the cat.While all his cat problems unfold, Junpei must also dodge the advances of his rapidly growing harem. At the heart is of course Junpei and his crush on the cute, but oblivious, Kaede Mizuno. Both like each other, and both are unwilling to confess. The relationship is complicated by the reappearance of Junpei's childhood friend, Kanako Sumiyoshi. Kanako was perhaps the shows greatest failure. When we are introduced to her she is covered in war paint, struggling to be different. However she is taught a "valuable lesson" and then reverts back to the tried and true tsundere childhood friend. Junpei's harem doesn't stop there however, we are quickly introduced to a gender confused mafia don, a rather busty mail carrier, and two shrine maiden twins. One of these is a lovably creepy stalker, the other is a lovable tsundere. Of course, there is also a rather large cast of cats, but I don't think Junpei is into that sort of thing.The animation serves its purpose rather well. The backgrounds are detailed and colorful and provide a good backdrop for the events onscreen. There are a few moments when quality seems to slide a bit, but not enough to really detract from the show.As for music, I make it a point to watch the op and ed at least twice each, for the first and last episode. Other than that, neither were memorable enough for me to watch more than a few times. The background music served its purpose I guess, so well though I can't even remember what it was. The voice acting however was excellent. Care was taken to provide each character with a unique voice that helped bring each of them to life.In conclusion, I give Nyan Koi a very average 6/10. If you're a fan of harem anime, or just a fan of cats, you might want to check this out. Otherwise, there are much better options out there. 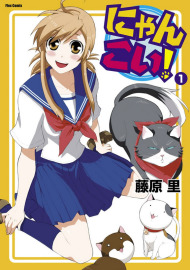