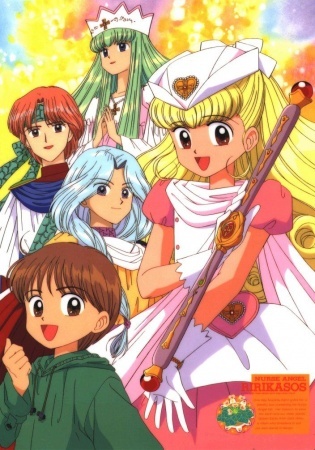 Meirin, a junior high schooler, is the real identity of the famous "Dr. Rin" who heads a very popular feng sui website. She is in love with her best friend Asuka, a member of the soccer team. "Dr. Rin"'s advice has granted success for many, yet Meirin's own love life doesn't seem to be going too smoothly?

Follows an office lady who transforms into a magical girl to fight aliens.

Miho Shinohara is a typical 9-year-old who is fascinated with showbiz and dreams of stardom. One day she meets a stranger who gives her 2 dolls, who later reveal themselves as magical dinosaurs named Pigu and Megu! They give her the special ability to draw clothing on a special drawing pad and turn it into reality, as well as transform her body into a teenager’s. One day, by chance, she is spotted by the president of a talent agency, Lyrical Productions. She lands her first job as a model, hence taking her first step into showbiz; but the road to stardom is still long and challenging. Can she, disguised as Lala, become an idol?

The more Wedding Peach and her friends Yuri and Hinakiku discover about their new-found magical powers, the more Rain DeVilla and her evil henchmen vow to destroy them. In the never-ending battle between love and hate, three young girls are the world's last line of defense against the onslaught of evil.