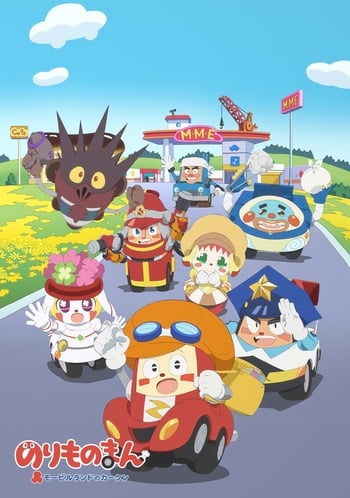 If you're looking for anime similar to Norimono Man Mobile Land no Car-kun, you might like these titles.

When disaster strikes in Brooms Town, police car Robocar Poli, fire truck Robotruck Roy and their friends on the rescue team race to save the day.

New in town, patrol car Pattle and his partner, Hajime make a funny fuss in Sunflower Town, where everything is new and interesting.

Tayo the Little Bus is about exciting adventures that are to happen in the metropolitan city where different vehicles live with harmony with one another. Tayo is just starting to learn his route in this busy city centre and on his journey, he is making many new friends. Full of unique characters that capture children's imaginations and fun storylines, the series has a lot to offer.

The show follows the adventures of a young boy named Ken, who has always dreamed of owning a car, and Bumpety Boo, a talking yellow car who hatched from an egg in the first episode, as they travel the world in search for Bumpety Boo's mother. Bumpety Boo, the fun-loving car, makes friends with Ken. Teaming up seems like a natural thing, but Bumpety Boo does not count on Ken's adventurous eight-year-old spirit. Throughout the series, Dr. Monkey tries to steal Bumpety Boo from Ken.