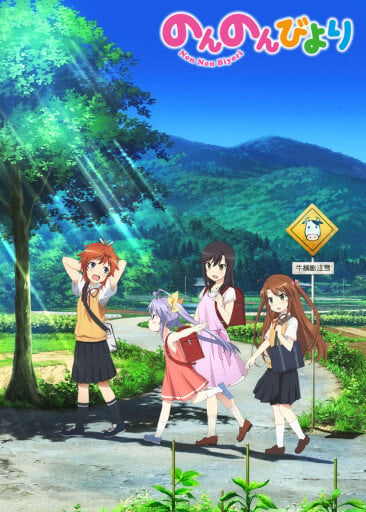 Non Non Biyori (lit. Non Non Weather),
is a slice of life and a comedy anime that I would easily recommend to both young and older viewers. From the very first episode on to the end of season two, viewer’s interest remains captivated and soothed through the portrayal of pristine environments, thoroughly enjoyable and quirky adventures of its characters, and a calming soundtrack. There is much charm to the serene and slowly paced storyline, which is dynamically complemented by the incremented character development of a whimsical cast. Thus, if you wish to relax, laugh, and enjoy life; I couldn’t recommend this anime enough.

Story: 8/10
The story is fitting of the (SOL) genre, and has high rewatch value. Twenty minute-long episodes are segmented such that each new day in the countryside village of Asahigaoka is presented along with its quirky laughs, disputes and unique adventures.

Art: 10/10
Much attention and care has been invested into the artwork. This is witnessed through the impressive background scenery. As examples, viewers are presented with a view of rocks within a stream of running water, the gentle sway amongst fields of grass in the wind, as well as a buzzing reminder as to surrounding insect life. The smooth and perfect visual integration of movement or processes within nature such as these, all serve to bring the scenes and its interrelated components towards a nearer degree of reality.

Sound: 10/10
The songs utilized for the opening (by nano.RIPE) and ending (by ZAQ), are fitting to the anime’s theme and exceptional recordings that are well worth checking out. The original soundtrack is even more impressive, where the composer Hiromi Mizutani strikes dissonant notes at seemingly perfect times, dualistically capturing the essence of nature and its fragility through the simple and off key sounding of a child’s recorder (aka Renchon’s melody). Also too, I now acknowledge the excellent use of silence in many situations within this anime; I can ascertain that it has served as most effective in enhancing viewer’s (such as myself) emotional perceptibility and relatedness towards the characters during concurrent situations.

Characters: 8/10
The cast is rather simplistic, but individually they are also quirky and unique; each in their own ways. This is further conducive towards enabling many comedic moments all throughout the anime. In addition, a case can be made in regards to the prevalence of a shōjo atmosphere, this is because almost all characters are female, and the few males are rendered insignificant to the point that it is funny.

Enjoyment: 10/10
As the story revolves around charming, and adorable girls, this means that inciting incidents mainly involve goofing around, dodging chores, and having fun in any which way possible. Then, from this I conclude that the degree of enjoyment derived from this anime lies in the beholder; in other words, that it depend’s on viewer’s preference or their appreciation for simplistic themes such as innocence and play.

Overall: 9/10
Thank you for reading,
I hope you enjoy~

I'm not really sure why this show is so good, as it has a very basic concept and in theory sounds kind of boring. But make no mistake, this is a beautiful, laugh-out-loud anime. Non Non Biyori is the kind of anime that you watch after a bad day and it instantly calms you down. There's zero drama, romance (unless you count Haruno's crush on Koma-chan) or violence, and the plot relies almost completely on character interactions.

I thought that Non Non Biyori's almost complete lack of a plot would be a huge turn off for me. However, the story flows beautifully and works very well in the seting. The only negative is that the pacing is very slow, and while that usually works well, it can at times feel stilted.

The animation is absolutely gorgeous. The character designs are very unique and each character is rendered beautifully. The backrounds are also stunning. As it's set in the Japanese countryside, there's a lot of beautiful nature and animals.

The music always fits the tone of the story and is very pretty. Renge's tune with the recorder is absolutely delightful and is still stuck in my head. The voice cast is also very talented, and each actor really embodies the personality of their character.

As the show doesn't have much of an overarching plot, the characters are the most important part of this anime. And they're wonderful. I love every single main character, from the mature Haruna, to Komari who wishes she was more mature, to the carefree Natsumi, and especially the adorable Renge! Seriously, Renge is the best character ever; if all the other characters sucked (which they don't) I would still give them a 10/10 because Renge is so awesome.

This is a beautifull anime that's very calm and relaxing. If you're into action and drama and romance, then this anime probably isn't for you. That being said, I love action and adventure anime, so you really don't have any excuse. Anyways, watch this, you won't be sorry.

The story is sort of about some country kids who have moved from Tokyo and are experiencing culture shock with their new environment as most people will, especially at a very young age like these girls are. It's a feel-good series that will brighten your days even if your sad with rare touching moments in it. Not a very original plot with cliched characters.

I don't know why people are so into these characters, they're pretty much your typical whiny kid. The only one I like out of the bunch and is my favorite character is Natsumi, now she was fun to watch but not great because she does get explosive. But the other characters are mediocre, Hotaru is a crybaby, Komari is a know-it-all who hates being called and treated like a little girl. And the youngest girl (I forgot her name but I think it's Rin), rather acts more like an adult than a kid.

I'm one who doesn't think this needs a sequel because I'm not fond of Non Non Biyori, it was a childish and silly comedy series with some weird elements to it, not surprising for a series aimed at kids but even they might find some of the series' music too babyish. Though, the series is not very very weird but it's still weird. Though, some parts did make me laugh but some jokes fell flat.

Non Non Biyori as the summary above suggests, follows Hotaru when she moves from Tokyo to a very small rural town. The anime focuses on her and three of her classmates over the course of one year. Overall, its cute, but was at times slow or boring to watch. I enjoyed the show most when I was doing something else while watching it.

Story: There's not much in the way of overarching plot. Each episode just highlights a moment during Hotaru's first year in her new home. Episodes were slow at times, especially the first few episodes, but I grew to enjoy the show later on.

Animation: Can't say I really payed much attention to it. I enjoyed the bright colors, and nothing stuck out as off-putting so I'd say the animation was pretty good.

Sound: The opening song is upbeat, much like the show, but not very memorable. The closing song was much more meorable, because it sounded like the main characters were singing it. I found it cute and fun to listen too.

Characters: Eh. I didn't hate any characters, which is good because there aren't any antagonists. I cringed quite a bit at Hotaru's obsession with her senpai Komari. She also wasn't nearly the most interesting character on the show, which is a shame considering she's the main character.

Komari is also not quite as entertaining a character. I enjoyed her character most when she was intereacting with her sister Natsumi. Their relationship reminded me of when me and my sisters were little, and their personalities play off of each other well. I also often felt sympathy for Natsumi, as her mother would often compare her to her older sister. Yeah, the kid got into a lot of trouble, but it bothered me that their mother would go straight to shouting at the poor girl. It added to the character development, so I'd like to see maybe their mother treating Natsumi a little better in the next season.

The last kid, Renge, is also the youngest. She is curious and imaginative, often spouting nonsense at random intervals. She was my favorite, and if you want to know why, it was episode 10. She was positively adorable, and I enjoyed that even though all of her friends were older than her it never seemed like she was ignored in the show.

As for any parents... there really isn't much to say. I made my case about Komari's and Natsumi's mom, Hotaru's parents briefly show up maybe twice in the whole show, and I don't even remember seeing Renge's parents. The show explains this as because they often work long hours (I believe they are all rice farmers?) This creates the feeling that the kids are raising themselves for the most part. The make up their own fun and learn from the hijinks they get into. That's all the show is really.

The only other adult that you meet is Kaede, who runs the candy store. She was an enjoyable character to me, and her friendhship with Renge was a highlight of the show for me.

Overall I suggest this show. I watched it a few epsiodes at a time due to the slow pacing, but the show is a cute and refreshing break from the drama and action that is the center of otheer animes. I would say this is appropriate for all ages as well, so if you're a parent or you babysit munchkins, and it comes subbed only if you were wondering.

This anime made me smile at least 50 times. It teaches you about the slow campside's rhythm with slow, relaxing and innocent episodes and stories. Everything happens in its own time in a place where there's simply no reason to hurry. When I was watching the 4th episode I already knew this anime would become one my favorities and it did. The characters and the backstories aren't that much well developed because they don't need to be. This show is not about what happens with the people, but how they react based on their own ways to see life itself! Wanna have a heartwarming, calm and beautiful experience? Watch Non non Biyori!