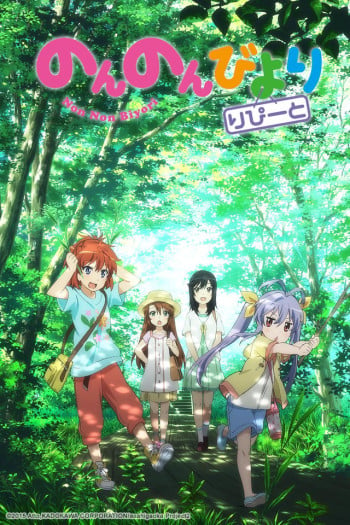 This is sort of a prequel to Non Non Biyori, which is a flashback to the time we spent with these characters. It sandwhiches in additional story elements that the first season missed out on. Now, I am not fond of Non Non Biyori, I think it's a very silly, cliched series and don't get why most people loved it so much, they begged for a sequel... and here it is.. Now, I'm not saying it's completely bad because Natsumi was a good character and I'm glad to see her again, but I guess having a sequel for her made her character go downhill.

The sequel is not much worse than the first season but it's still painful to watch. I almost wanted to stop it but it was quite interesting that I couldn't.

When I thought that the characters were getting better, they just went downhill again because of the slow pace of the series and the amount of drama it puts in rather than comedy. Non Non Biyori is supposed to be a comedy, and they left out most of it to develop the story and characters. They haven't changed that much except for a few got even more random like by chasing bugs (not a butterfly), which is gross.

Even Natsumi develops a sisterly relationship with Ren-chan, which is due to her experience of being the younger sister of the shorter Komari, but it still doesn't click with me. I mean, none of the relationships do.

Hotaru's voice sounds like an 8-year-old shy girl, not surprising since she's also childish but it still doesn't sound like an 11-year-old, nor does it fit her personality. And Ren-chan's still has a bit of that scratchy sound from the first season. But that ending music was awesome for this children's anime series.

Even though the characters are relateable, they are not very unique and the show tries to have them stick with you sometimes but it doesn't excellently does so. They're cliched like veering between acting their age and acting older than they are.

The animation looks like it skipped a few frames, and the art is typical anime style while looking unfinished.

I hope that the OAV that's coming out later this year is much better but I doubt it is. I can try it if it's good, though.