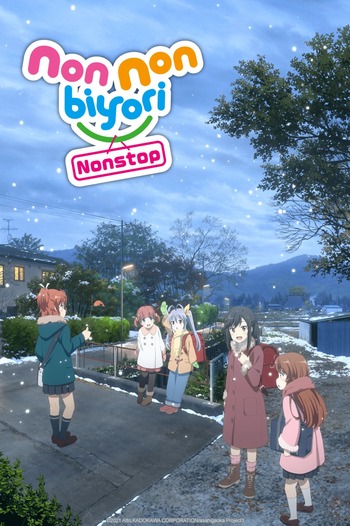 Nearly crying tears of joy while writing this because of how perfect this season of Non Non Biyori was. And when I say perfect I really mean perfect, as in I have absolutely zero complaints about this flawless final adaptation. It's practically impossible to nitpick and locate a single point that could be improved on in this 12-episode blessing. From start to finish, Non Non Biyori Nonstop embodies everything that an iyashikei anime should strive to be.

There are just a couple things I want to touch on about this season that made it such a praiseworthy piece of work - at least to me.

The biggest point I want to stress is how perfectly the entire character cast is handled. Comprised of numerous very likable individuals, in a mere 12 episodes we are lucky enough to see pretty much every single one of them in the spotlight for a pleasantly long yet balanced duration of time. In the previous two seasons, there were some girls who proved to be extremely amusing even in their sadly limited screentime - in particular, Candy Store Kaede & Tokyo student Hikage come to mind - and I felt that some of the time dedicated toward the main quartet's antics (as wholesome and entertaining as they are) could have been better spent exploring those supporting characters a bit more. But following my completion of Nonstop, I can joyfully and confidently say that those subtle issues of mine have been resolved and replaced with pure appreciation for this show and its wonderful writers.

Along with providing viewers with some highly enjoyable moments centered around these returning side characters, season 3 also introduces a couple of new faces (and believe me, they're equally as wholesome as the rest)! Typically, I am a bit skeptical when an anime decides to toss some completely new characters into the mix this late into its progression, but I absolutely loved these additions to the cast, and seeing how naturally they meshed with the preexisting group of girls only increased my happiness levels even more. Truly, truly wholesome stuff.

One more thing I'd like to note on the topic of characters is how well Renge's development is shown through this last season. It almost feels out of place to say that genuine character development occurred in a slice-of-life show like this, but that was really the cherry on top for me with Nonstop. There were many moments where the frame simply rests on Renge's face, implying that she is deep in thought, and as a result of these moments' masterful timing/placement, I constantly found myself pondering what exactly was going on in her head. In the end, they all point to her blooming desire to be something of a role model to her younger companions as a product of her own experiences with her older sister figures, and watching our little Nyanpasu grow up just fills my heart with bliss.

Another notable element of Non Non Biyori Nonstop is its beautiful animation - particularly its use of cinematographic transitions. The eye-catching images of countryside nature throughout all four annual seasons really stir up an emotional attachment to the small town. They also drive home the subtle message that so much joy can be found even in a place that is relatively technologically underdeveloped. These girls spend all their time playing outdoors simply enjoying each other's company, and through the very appealing usage of landscape animation, we can see why they are always so happy.

Finally, I want to state my love for the ending theme, which in all 3 seasons has never seemed to disappoint me with Non Non Biyori. What better way to end each episode than with all your favorite characters cheerily harmonizing to a brand new original tune? It always puts a smile on my face and helps me forget about the sadness of this amazing show being over

I couldn't have asked for a better conclusion to this anime than what Nonstop delivered to me. With each episode, I could feel my happiness levels increase as it continued to positively surprise me in multiple ways. Not a single second of this season's runtime was wasted; this was unironically the most engaging thing I have watched in months. My first personal 5 star rating of 2021 rightfully goes to Non Non Biyori, indisputably one of the greatest slice-of-life/iyashikei works in existence.

Shed a tear for Silver Link’s brilliant rural comedy came to an end with its third season in 2021 (nearly six years after season 2). We’re going to push the boat out here and give this a rare 10/10. When something is THIS brilliant, yet is so understated, it somehow hard to find the words to describe exactly why an Iyashikei show (like this) is so wondrous. It’s like the perfect recipe with its combination of ingredients all in the exactly correct proportions and blended with love. When you taste it, you are not conscious of the constituent parts yet it would be incomplete if any were missing. There are occasions when Natsumi goes full-on Bart Simpson, or Hotaru’s plushie obsession is just too cute for words, or Kazuho is just too lazy and sleepy to be taken seriously as a teacher. It’s all here. As always, the signature flavour is marked out by the relationship between Renge and Kaede. Fans will note a small progression by season three. Two male characters now have speaking roles which is somewhat of a miracle in a village that seemingly is only populated by girls. It also seems as if Tokyo has got a lot closer as Konomi regularly attends band practice during the summer holidays. One of her high school friends, Akane, then becomes a regular sight joining the girls in an effort to overcome her shyness as well as perfect her skills playing the flute.

Another new character is little Shiori, a new friend of Renge, being one year younger. Another girl, Honoka (who we last saw in Season one) returns and renews her friendship with Renge. Between these, and a few new adult characters, the cast has grown significantly and it is hard to keep up as they don’t always have very distinctive looks. Season three events (like season two’s) seem to run concurrently with season one’s. It ends with the graduation of Suguru (“Glasses-chan”) and Renge becoming a Second Grader. The highlight of the show comes in episode 11 when Kaede (Candy Store) visits Kazuho for a few drinks but then gets too drunk. She hides her condition from Renge before slumping into tearful reminiscing upon the little baby Renge once was. Both she and Kazuho well up with tears thinking about how their little girls have grown up. It is a truly touching moment set-off with just enough humour as Hikage watches the two in disbelief. There are just so many little moments of genius like this that it is hard to list all the best parts. Consider Renge and Shiori’s bizarrely adult philosophical discussion in episode 7 or the strange escape of Hotarus’s robot Komari plushie in episode 5. This is a show that just discretely slips from one little slice of comic genius to the next and makes it all look so easy, so slick. We are going to miss these girls like crazy. A true goldmine of joy.

I had one single misgiving when I began viewing the third season of Non Non Biyori, Nonstop.  We were once more running through the same first year of former Tokyo girl Hotaru Ichijou in the rustic environs of backwoods Japan, the pristine village of Asahigaoka.  Again.  More adventures of the four diversely aged classmates of the Branch School seen through the passing of the seasons, ending with that shower of cherry blossoms which bring the cheerful iyashikei to a close.  After viewing two seasons, have the third season rehash the whole same timeframe gave me feelings for that children’s novel Tuck Everlasting, whose non-aging characters were charming, yes, but were starting to become trite and anachronistic after a few chapters.

But, with Nonstop, there's this hitch.  It comes blaring out at you in the final episode, but you come to realize that this all has been playing quietly out through all the episodes.  And it's subtle.  Each girl shows some level of maturity as they pass through that particular stage of life they've entered, and, by season's end, has finally moved past.  For young Renge, this comes with the entrance of little Shiori, the constable's daughter who is helped by Renge when she becomes lost.  Renge gains the perspective of being the 'big sister,' an aspect Shiori ironically gains later on when there is a birth in her family.  Renge also gains the friendship of Akane Shinoda, a high school classmate of Konomi who shares an interest in the flute.  Akane's hard work in practicing the flute at Konomi's house brings out the best in Renge's recorder playing.

Nonstop brings out the best in the older girls of the series.  Candy Store is Renge's second mother, and a bout of drunkenness on her part is a serious breach of offence which Candy Store is resolved to keep hidden lest Renge thinks the less of her (Renge can't, the dearie).  HIkage remains the inspiration behind Natsumi's mischief, but her budding friendship with Akane seems to mature her.  Konomi is courageous in looking forward to her new adventures as a collegian.  Even that laziest teacher in the world, Kazuho Miyauchi, gains a new respect for her work of training when quiet-natured Suguru Koshigaya graduates from the Branch School.

It is one more twelve-pack of youthful experiences of the cast of Non Non Biyori.  The strength of this series has been the animation, but specifically of the nature scenes, which come as us as still landscapes until someone activates them.  A marvel of technique.  But NNB seems to do less well with animating the human figure.  These are not as majestic as the vistas in and around Asahigaoka.  But what makes them as majestic comes from characterization of each individual, a soul of integrity wrapped in a distinctive personality.  Refined but immature Hotaru.  Inquisitive, assertive Renge.  Easily flummoxed Komari.  Mischievous but good-natured Natsumi.

In the end, I saw what was worth waiting for.  Renge is a second-grader.  More, Shiori joins the Branch School, making Renge a senpai (and so young, too!).  Others make their special transitions as Konomi in college, Suguru to high school.  But life continues at Asahigaoka Branch School, as always.  Just slightly altered.  And that is not bad.

This leads me to fear that the greatest irony in Nonstop is that it might well be the last season.  All good things ... so they say.  But any winding it all back to the beginning and playing those twelve months over again would be a little harder.

Still, they said ... NONSTOP.  We might hope for more.