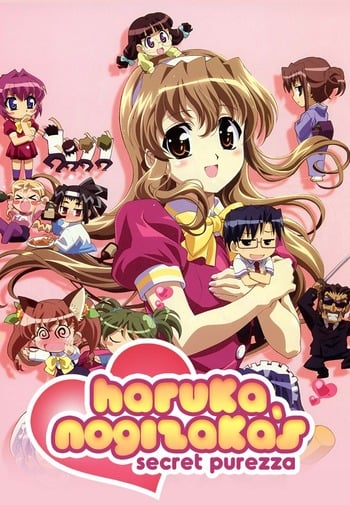 If you're looking for anime similar to Nogizaka Haruka no Himitsu: Purezza, you might like these titles.

both animes revolve on a school life aspect and especialy on two students that fall in love with eachother and the difficulties they encounter all for the sake of happiness.Both animes have a very well defined comedy aspect, and a warm romance aspect as well (better developed in Itazura na Kiss) so im sure that if you like one of this two you will like the other one as well.

Both anime have girls that wish to keep their job or hobby a secret. Of course a boy finds out in both their situations and comedy occurs from there on. Check one out if you liked the other.

Though Nogizaka has far more romantic overtones, both place heavy focus on their outwardly perfect female protagonists hiding their secret otaku lives from the general populace. If you liked that then Ore no Imouto will likely interest you.

These two anime are similar in the way that they both are romantical comedies featuring a boy who is being forcefully dragged into the "otaku world" by a wealthy bishoujo. The humor is quite different in each series but you'll surely enjoy one if you liked the other.

These two anime are similar in the way that they both are romantical comedies featuring a boy who is being forcefully dragged in the "otaku world" by a wealthy young girl. The humor is quite different in each series but you'll surely enjoy one if you liked the other.

Both are great titles who deal with the otaku culture in a similar way. They both present many aspects of the otaku lifestyle as well as some of the major "otakuish" events like conventions at the Tokyo Big Site or Budokan idol live concerts mainly through a mix of comedy and romance.