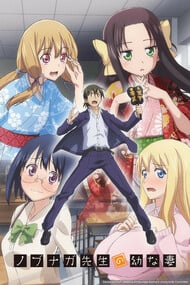 "One day, there'll be a girl who'll fall head over heels for me." Nobunaga was a teacher who was waiting for that kind of dating sim event to happen in real life. One day, a 14 year old girl named Kicho appears in front of him, saying that she's his wife?! Apparently she came from the Warring States era and seems to have mistaken Nobunaga for the Oda Nobunaga and tells him that she wants to have his children.

SOME SPOILERS: This honestly is one of the few shows I would recommend skipping. There is multiple on multiple problems. But before I keep going, it should be noted I watched 6 ep of this crap. At this point it's to see how bad this train wreck is. It's borderline pedo. This is a spoiler, but their is a moment in one of the ep where the adult teacher is telling a 14 year old girl how to sexually pose on his bed. Another part, to make a decision on which underage child will wed the adult. The underage kids made a contest where the person who has sex with the adult teacher, they will wed him. So they tricked the teacher to come in a room within the school with both kids naked. (He doesn't have sex with the kids obviously, but keep in mind this is written into the show). In fact, most recently the teacher found a loli that's an adult. And his first thing after finding out she is an adult, he thinks to himself he shouldn't bang her right there since others were around. And something to note, this guy seems to be interested in completely flat chested loli girls. Which means he is into girls that looks like they are pre puberty. Ignoring the first major problem, there is a problem in time. The episodes are way too short. There isn't enough time to really get a connection with anyone. This means everything feels like fluff or like it's meant to be a joke. The jokes in this show falls flat. To add on to the last thing listed, there isn't enough time for the jokes to be meaningful.  To add to point 2, the overall plot is girls who want to sleep with the guy from this guys past life is coming to the future whenever he touches something they used. But other than that, there isn't anything notable with the people. Like with the teacher we know he wants to screw people that look like kids while working directly with them, he is single, and ..... there really is nothing else after 6 ep To add to the last point, the story sucks. Like what I said is pretty much it "girls who want to sleep with the guy from this guys past life is coming to the future whenever he touches something they used."  This is on the verge of a hentai. This normally can be a good thing, but again the first problem I listed. The character animation is iffy. There isn't a ton of problems in this, but some that are noticeable is things like Yuri boobs. There is one part where the guy thinks to himself stripping her. Her boobs at first looked like an easy F or DD. Then moments later her boobs went to a size C when he strips her. To be honest, they could've easily made this into a worth while show. If they focused more on the story or people and less on sex. Then it could've been worth a watch. But I'm honestly wondering how did this get approved by any studio. To show you how bad point 4 is. Here is what we know of each person. Nobunaga The main person, and as said before he is a teacher that wants to screw people that looks like kids. He is single, wants to be with someone, and is seems to be a rebirth of someone in his family. Ichika The main person's sister. She was there when Kichou comes out. She checks in on her brother at times to see how he is handling the girls. That's pretty much it. Hanae & Nobuhide The main person's parents. After the first ep we never see them again. All we know is they use their kids to clean their own place (which causes Kichou to come out) Yuri She is another teacher. She actually steps in on the "sex contest", and she goes with the group to prove to Kichou she isn't in her time. There is no evidence she wants to sleep with the main person. Mayu She is an actual student. She was one of the girls naked in the contest talked about above, and she wants to sleep with the teacher. We know she is nice, she was wanting to graduate before telling the teacher how she feels. Anna She is another actual student. She doesn't want to sleep with the teacher, but she is pushing for Mayu and the main person to be with each other. To the point she was the one who thought of the contest. Kichou She is the first girl that shows up. Her brother killed her father, and she was going to marry the main persons ancestor. She wants to screw the main person to make it official, and she keeps getting naked due to this. She only recently found out she isn't in her time. We know she doesn't actually trust anyone since it took her seeing the mountains to believe EVERYONE is telling her the truth. Ikoma She is the latest person to come from the past. She remembers dying. She is an adult. She wants to wed the main person. There is a little bit more on her past life, but not by much. And she is 100% OK with everyone she knows is dead, she knows no one, and she has to hit the ground running she she is an adult.

Often cringy and downright disgusting but if you like a naughty anime with sex acts it is possible to enjoy it some. Some of the sex acts involve girls that look too young which is creepy. I did laugh now and then so it is a little funny too.  Perhaps its best quality?

get's real gay at the end (maybe a spoiler) 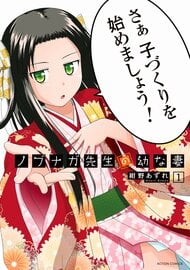