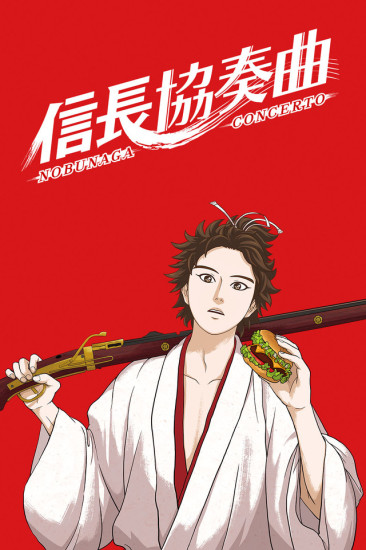 Let me start off by saying this anime is probably one of the most underrated of the Summer 2014 season.

Imagine if you enjoyed your everyday life and then you suddenly wake up in a completely different world :o

Well that happened to this teenager. Luckily he meets the ruler of the land who for some reason, looks exactly like him! What could happen? hmmm

I won't spoil as much, so I'll just say that the story is really interesting! It's based on real history of Japan mixed with a guy from distant future (present day). I'm really glad there's no gore/battles/sex/nudity in this title, because honestly, it would ruin everything. So yeah, the show is kind of for everyone who's willing to understand what they are talking about.

A large portion of the show is based around war, but it's very balanced (unlike Lord Marskman and Vanadis). There is a lot of war, but it doesn't ruin the show.

Also if you have absolute NO idea about Japanese history (like myself) that is perfectly fine because I'm sure you will find this title interesting, and learn something so win-win.

It only has 10 episode so it does feel a little bit rushed. It's still pretty much enjoyable and entertaining ^^

Animation is really unusual. Some of anime fans might not like it. It's a mixure of 2D and 3D art. I personally love it. The art is so beautiful, and the animation of characters seems really realistic. So I really like the style because I've never seen something like this in anime.

Now even though I think animation is really good, I'll have to say that there are some awkward scenes in which I just thought something was... off. I noticed a few times their movement just doesn't seem right or the whole scene just doesn't look right.

Nothing bad about sound, I love their accents.

Voice acting is good, I only caught few times where it's a bit out of sync but nothing major. Music is sort of non existant, but I wouldn't expect a rock theme playing in the background while they are drinking tea in a fancy palace so... Yeah, I have nothing against the sound in this title. It's not perfect, but solid. 8/10

Most of the characters (except the main character) are based on real people (that existed around 500 years ago...) and most of them are pretty likeable.

The main character is so funny and just the way he's acting around all of these super formal noble people is hilarious.

So yeah, just the whole setting is hilarious. Love all of the characters and how they developed them. Love that the main character is not the only ''person in a strange world''. But I won't say more about this :P

This anime is great. It's funny, it's interesting, it's useful for all us who are uneducated. So if you want to watch something that focuses on story rather than action, with lots of humor, this anime is great for you!

Thanks for reading this review! ^^ 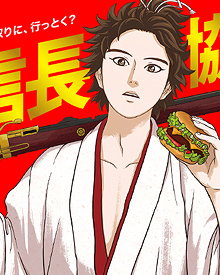 Saborou, a modern day high school student, is flung back into the past ... smack dab in the middle of the Sengoku Era where he has a run in with a sickly Oda Nobunaga who asks for him to trade places with him due to their uncanny resemblance to one another. Despite not being well versed in history Saborou is armed with his history textbook and is determined to use it so as to not mess up history. With all his knowledge of the future, will Saborou be able to unite all Japan as Oda Nobunaga?

The plot to me was what kept me on the edge of my seat. I loved how they made it seem as if this was exactly the way things were meant to happen and how Saborou was meant to become the Oda Nobunaga his history textbook spoke of.

The animation was ... unique, I suppose. I didn't much care for it, personally, but felt that it really didn't take away from my enjoyment. It didn't come off as particularly fluid and was rather stilted and awkward at times but the backrounds were lovely and were really the saving grace of the animation. The soundtrack, on the other hand, fit the setting remarkably well!

The characters were one of the highlights, for me. You had the modern thinking / slightly airheaded Saborou whose luck often made him seem like a tactical genius (and who, quite frankly, was a little too relaxed at times and just went with the flow ... he came off as a bit nutty but I came to adore that part of him!), the soft-spoken and sweet Kichou, the serious yet extraordinarily loyal Tsuneaki who, although originally against the changes in his lord, eventually becomes one of his most loyal supporters, Nobunaga's airheaded sister Oichi whose personality was so like Saborou that you would think that in reality Saborou was really her biological brother, the real Nobunaga who became impressed by Saborou and became one of his staunchest supporters and went to work for him under an alias, though....

though by choosing Matsuhide Akechi as his new name, he ironically became the future murderer of Oda Nobunaga. Since Nobunaga is who he is in reality I found it even more ironic and oddly fitting. When Saborou saw Honnoji and blurted out that it was where Oda Nobunaga dies but then blanked on who killed him ... and then 'Akechi' speaks up and says he'll see to it that nobody kills him ... I found that oddly hilarious as he, himself, was the future murderer ... (my sense of humor is weird ... I'm aware -_-" ) Overall, I originally didn't hold much expectation for Nobunaga Concerto ... but by the end I was slightly addicted ... and very sad to have to say goodbye to it. I hope they do another season someday!

I actually somewhat liked it despite the mixed response. If anything it was the animation that threw me off, i don't mind them not having expressions, but when they get hard news like the death of a friend i feel like it's necessary. The inconsistency in animation was a little weird too. I liked the story though, (i'm on episode 3 my opinion may change🤷🏽‍♀️) it's been interesting.

Edit: I stopped watching after the 3rd episode lol

Where is the rest? This is a great series! At first I was like oh yeah another time leap anime great... But this one is good. The animation is stylistically unique and colorful. The sound is good. The story is intertesting and entertaining. Then it just stops at 10 episodes. Still, its worth the watch.

Nobunaga Concerto belongs to the Isekai subgenre, where people from our world are mysteriously transported to others. It doesn’t follow the degraded form most of them have today, being an excuse for otakus to form harems in fetish infested settings. Meaning, Nobunaga is not a half naked loli. Yes, that’s an actual trend in anime.

It’s not well animated, since the combo of motion capture and CGI heads throws it right in the middle of the uncanny valley. Even if you get used to the weird motions of the body, the facial expressions, a vital aspect of likability, have a robotic feel to them. Everybody looks goofy and doesn’t seem to react much because of it.

It’s not well written either, since most of the things characters and the narrator are saying come off as lazy exposition instead of a natural exchange of information. They say a lot more than they show. It even feels stupid as a premise. Some idiot gets transported into the past, gets instantly replaced with the historical Oda Nobunaga, doesn’t question it, and everybody is fine with his completely different behavior. And no, you never get an explanation for how or why he transported.

It is poking fun at the impersonation of a famous personality by making him serious every time a historical event is about to happen. This makes the fabled character development many praise the show for, to come off as artificial. Every friend the protagonist makes does not happen through his actions; it was destined to happen. His motivation for becoming the ruler of Japan comes down to having to do it because it’s in the history books. So basically, everything is predetermined, there is no free will, it’s all a big setup.

Trying to see the whole thing as a comedy instead of a historical documentary doesn’t help a lot, because the delivery of the jokes is lukewarm. You can thank the robotic expressions everybody has, which makes it hard to tell what they are feeling. Also, a big part of whatever the anime considers funny has to do with the dolt protagonist using the stuff he brought over from present time and making everybody around him to think they are sorcery. Meaning, he is not funny or talented, it’s future technology that makes him appear to be.

It doesn’t even stick to being a comedy, since it is also trying to be tragic by having lots of people dying and the surrounding lords being after his head. Without even giving you the time to get used to the deadpan jokes, it’s now full of drama and bloodshed. And just like the comedy, it’s not done in a particularly exciting way, since they hardly show any battles and every conflict is resolved in a silly way.

I also have to complain about the music. The BGM is forgettable, there is no opening, and the ending is power metal which despite being catchy it doesn’t fit the tone of the show at all. I couldn’t even enjoy it on a superficial level since the presentation is a mess of iffy animation, dull dialogues, and out of place music.

Hell, I couldn’t even enjoy it as a story in general because it’s left incomplete. If they ever make a continuation (which I doubt) I am not going to watch it since it bored me to tears. It’s not funny, the characters look retarded because of the CGI, and it’s once again a trick to make you go buy the source material. No, thanks, I’m dropping off.