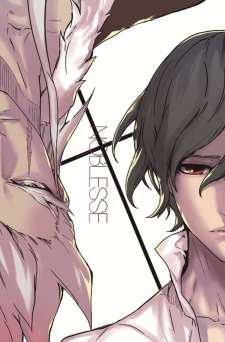 Noblesse: The Beginning of Destruction is a 37-minute prequel to the popular webcomic Noblesse. That might make you think it's ok to watch this first, but I would not recommend doing that: it's more an "extra" for the people who read the manhwa, rather than a stand-alone movie.

The OVA shows why Raizel and Muzaka ended up fighting, and how their fight went. There's really not all that much information given: if you're going in without any knowledge, the presence of werewolves and Nobles must be really confusing. Then again, while the Noblesse: Awakening  OVA might be aimed at people without knowledge of the world of Noblesse, that is definitely not the case for this OVA.

But as someone who is up to date with the manhwa, I have to say this OVA doesn't give much new info either: what happened here is all talked about (and shown in brief flashbacks) in the manhwa already.

As far as the actual plot of the OVA goes... it's really simplistic, and there's also the problem that you already know the outcome of the fight. So either you're confused because you don't read the manhwa, or you're bored half the time because you do...

When it comes to characters... it's the same as for the story: all you know about them is what you know from the manhwa. Which is a problem, since one of the characters doesn't appear in the manhwa, and might as well be replaced by a piece of paper.

The animation was nice for the most part, but at some parts I felt like they cut corners to keep it as cheap as possible. The final fight looked pretty nice though.

The artstyle was nice, and felt a lot like the manhwa's current style.

This OVA was made in Korea, and voiced by Koreans... which sounds really odd if you're not used to it (I sure wasn't). Overall I can't say I had a problem with it, although I felt like Muzaka's voice during the fight was a bit off.

The music, on the other hand, was really great. I'm definitely looking that up later to listen to it again.

For people who are reading the Noblesse manhwa, this might be an enjoyable way to spend about 35 minutes: seeing the entire history animated is pretty nice even if it's simplistic, has some boring moments, and you know how it ends already.

For those who don't read it: this is probably a waste of time, and you'd probably better give it a try after reading the manhwa.

Noblesse:Pamyeoul-ui Sijak is only meaningful and precious to those who have read the Manhwa. The Manhwa does not actually show much of Ashleen and the events leadiing to the her death and this anime is basically for that gap in the story. It is a heartbreaking story and it holds to light how much ashleen mattered to both Muzaka and Raizel. It's a must watche for all Noblesse fans.

Noblesse has become one of my favorite animes and webtoons(just started reading it recently for missed details before animation comes back). Loved how close friends they were before what happened and how much they cared for her even tho Raizel just meet her.

What sucks about that is the mastermind(s) seemed to have gotten away with what they did.