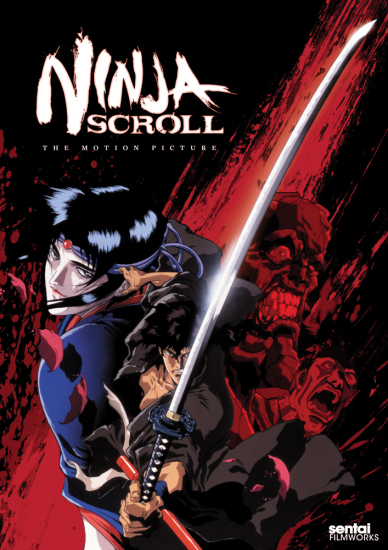 Some anime were just built to age well - confident, efficient, classic, timeless, they continue to thoroughly entertain long after their era has passed. This is one of those movies that sits comfortably on my shelf amidst Bebop, Evangelion, Princess Mononoke, Escaflowne, Trigun etc. It's not groundbreaking or sophisticated or heart-warming like the others, but it does show you a bloody good time.

Ninja Scroll is a fast-paced festival of violence which hits the ground running by offering a riveting combat scene within the first thirty seconds. To their credit, the creators managed to retain a firm hold of the racing plot. How did they do this? By alternating between politics and action and allowing one to drive the other in a very logical, stage-like structure - which means that just before one element has the chance to get tedious, the show changes tack to give you something new. Moreover, at any point in time, you know exactly where you are in the story, how you got there, and what has to be achieved next.

Throughout, the plot also maintains a good balance between delightful fantasy and harsh reality in order to keep the viewer believing. Take for example the uncomfortable scene in which Tessai has captured Kagero and proceeds to have his fun with her. Sure, Tessai is an unrealistically sized brute who can change his skin to rock, and the way he manhandles her like a rag doll is odd to watch, but nonetheless these factors don't dispel the cringe-worthy reality of Kagero's ordeal.

There are really only two plots (the personal tensions and the external politics) which, in the end, all boil down neatly to one climactic conflict. Ninja Scroll is thus streamlined from beginning to end, neither diverting the audience's attention with subplots, nor fragmenting in the face of poorly realised ideas. Towards the end, the show may seem to lose a little of its initial impact, because the twists revealed are not exactly earth-shattering, but a tragic angle and an extravagant final battle provide the necessary knock-out factor. I just never tire of this movie, no matter how often I watch it.

Movement is fluid in a way that still rivals more recent shows. When characters leap or parry, the combination of cuts and well-budgeted animation really hits the spot. The individual battles are also unique e.g. no two antagonists look the same, no stunts are repeated twice, and part of the enjoyment is watching Jubei and Kagero get themselves out of bigger and trickier situations at every turn. There's gore aplenty to be found here, with blood gushing freely from massive wounds and limbs flying like leaves in the wind. I have only one criticism in that there are notable instances where frames are obviously repeated, but luckily these occur only in situations where lots of people are moving at once.

With a lack of an opening theme, little variation in soundtrack, and a pretty unimpressive ending theme, the voices definitely did the most work. They are performed very well in Japanese and decently enough (although with more cheese) in English. Whilst I'd consider Jubei equally good in English and Japanese, Kagero's Japanese voice was especially enjoyable because she pulled off dispassionate femininity so well. Overall, I view the Japanese voice acting as more effective because the pacing of dialogue fit the scenes far better.

Jubei is a typical hero figure who casts witty one-liners when least appropriate and gets involved in some visually exciting scrapes. However, he doesn't actually ever develop as a person, with the assumption being that he did all the growing he needed some time in the past and this story is about him dealing with some unfinished business. For that reason, it is a good thing that they treated Kagero, his love interest, with more care, since it allowed the audience to treat Jubei more as a guide than the main object of empathy. Attached to him is Dakuan, the old spy, whose worth is mostly in providing a sort of cynical comedic relief.

My favourite character by far is Kagero as she turns out to be the most layered of them all. She is easy to understand in the sense that she is an efficient killer who is used to working alone; on the other hand, there is a side to her which is revealed incrementally, a side that doesn't want to be isolated yet still feels too worthless to expect anything more. I did not anticipate that kind of attention being paid to her since she initially appears to be a sidekick, but in the end, it's the film's surprising ability to delve a little deeper that made it so enjoyable.

Much of Ninja Scroll's strength lies in the variety and creativity of the Devils of Kimon; each one has a different talent and a different personality that comes across very well despite the little time we spend with each of them. In particular, I was pleased to find that, far from being a line up of fodder for Jubei's sword, there existed a certain dynamic amongst them as a group. Especially noteworthy were Tessai the man made of rock, Yurimaru with the electric string, Benisato the snake woman, and Mushizo the wasp man. In sum, for a ninety minute production, we get treated to a commendable cast of interesting personalities.

This is a sturdy action movie along the lines of Vampire Hunter D: Bloodlust which delivers exactly what you want when you want it. The cleverly edited action sequences make for an enjoyable visual journey, and the colourful pic'n'mix of gimmicky antagonists add a generous helping of fun. Streamlined, fast-paced, and with a keep-it-simple approach, Ninja Scroll has and continues to provide top-notch entertainment.

I have to admit, I love this anime. The only problem I have with it is the fact they never finished it. At least not to my knowledge. I did research on it and could not find the next part. But that is not the case. The story is intriguing and romantic. A wandering swordsmen who really cares for just himself gets caught in a fight that could very well end the world. Strong recommendation to anyone wanting to watch a die hard killer anime. If you Like Gutts, you will love Jubei. I also love this rendition of Jubei. His name has been used in numerous animes and the basis of who he is always gets twisted. This is my faavorite version of who I believe Jubei is.

Pretty cool. It felt like some guys wanted to draw some gore, and nudity, then they decided they could make a movie out of it. So they did. The way most of the battles ended were very anticlimactic. Big epic fight, and suddenly a rat comes in and blows up.

STORY: Ninja Scrolls is the Story of a pair of Ninjas, Jubei and Kegora, "Persuaded" by the old ninja Dakuan, who fight the Devils of Kimon (A group of superpowered evil ninja) led by Genma, an immortal who hopes to use his abilities to become the new Shogun of the Dark. There's a bunch of political conspiring and a gold mine mixed in as well, but that basically what it's about.

I did enjoy the story for Ninja Scroll, it was action packed and had a pretty good plot, however it definitely had some faults. It could have used a few less enemies, as the pacing was a little off. The first fight with the first main villain in the show is really good, but there is so many enemies to fight, the rest of the battles are all very quick, and rushed along to the next one. Even the final battle doesn't seem as intense as it should, its about as good as the first fight in the movie, but not really worthy of being the climax of the show.

Also, i wasn't impressed with the way in which the movie was resolved. I can't say much more without spoiling, but seriously? thats all it took?

ANIMATION: Like the story itself, I was a fan of the animation in this movie, it unfortunately did have some drawbacks. I wasn't a big fan of the character design. It wasn't terrible, but it just wasn't quite to my liking, however it does get credit for being a little unique. On top of that, there are a couple scenes where you can tell they're recycling the same animation. Aside from that tho, the animation is stellar. Excellent shading and lighting, excellent camera angles, pretty good action, the character design isn't exactly boring either.

SOUND: Solid as per most other anime. Some of the voice actor choices weren't to my liking.

CHARACTERS: As I mentioned above the movie could have done with 2 or 3 fewer or characters. Aside from that, there isn't much to complain about except maybe that Kagora is kind of a boring character.

Pretty good anime film having good action with lots of gore and character development. The hero was your typical cool-ish nice guy with great power with the heroin being pretty interesting, it was cool to see how she develops throughout the film.

The story is about a mercenary Ninja hired by a group who gets caught up in the struggle of power between clans, which has some relation to his past. It was okayish.

There were a lot of weird ass ninja's in the film with really weird powers and skills.