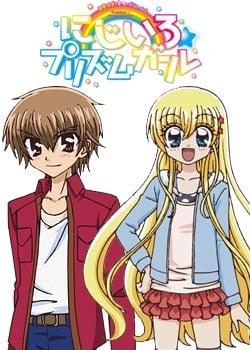 If you liked Niji-iro Prism Girl you would probably like Full Moon wo Sagashite, since they both are about idols, who are too young to be considered eligible for that industry, but get around this by looking older than they actually are (in FMwS she transforms into her 16 y.o. self). They also both have their own goals for doing this, which is to be seen by their loved ones (in FMwS by her friend, who moved to the US and in NPG by her mother in heaven)

The art style to both these animes are similar and the plot to which both the main female characters work hard and there is a boy who watches over them :) and a relationship develops between them in both animes.

If you liked Niji-iro Prism Girl there is a high chance you might like Skip Beat! (or other way around), since they are both about idols that are determined to show that they are better than ordinary idols in order to reach their goals (In Skip Beat! the main character tries to get revenge on an ex-boyfriend and in Niji-iro Prism Girl she tries to make her dead mother happy by following in her footsteps and achieving greater things than her mother.)

In both these animes, the leading female character works hard for something and they both develop and romantic relationship with the boy who watches over them. The art style to both of these are similar sort of.

The romantic comedy centers around Makoto Kisaragi, a 15-year-old girl whose "special ability" is her persecution complex. She was raised well but in relative obscurity compared to her big sister, a famous model. Despite her negative personality, Makoto vowed to become popular when she entered high school, but things did not turn out quite so well for her. One day, she meets Iriya, Mr. Popular in their class, and they become friends.