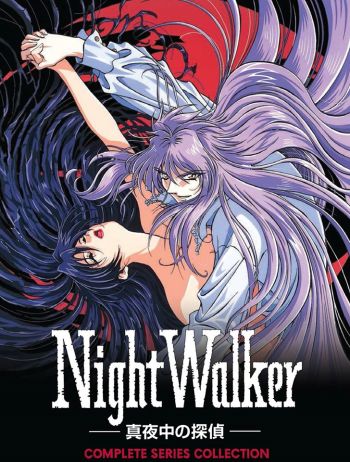 NightWalker bears a striking resemblance to the Vampire Princess Miyu TV series, with only a few minor differences. First, there are more main characters in Night Walker. Second, NightWalker's arc sometimes end on a positive note, whereas Miyu's episodes almost entirely end in a depressing or solemn manner. Beyond that, however, the two are formulaic to a T: the main character hears about a strange case, finds the people involved, discovers one is possessed, and gets rid of the demon somehow - repeat as needed. Unfortunately the two also share one unwelcome similarity: a weak plot. As I hated Miyu TV, it should be obvious what I thought of NightWalker.

To be fair, the premise sounds interesting. I enjoy dark and moody things and Night Walker appeared to fit the bill. Unfortunately the stories involving each "demon" of sorts is interesting, but not for 12 episodes in a row. I'm fine with monster of the week type stuff but only if there's ANY sort of plot that ties them together. Take Witch Hunter Robin, for example. Though the first 12 were episodic, the second half of the series was pure plot. Unfortunately with Night Walker, the only "plot" to speak of is the ongoing "situation" with Riho (won't say more as it would be spoiling). In addition, the individual plots of each episode just weren't compelling in any way. Sure, it sucks to see generic person #48 become possessed somehow, or generic person who died #12 becoming a demon and the loved ones trying to hide the fact, but after about, oh, three episodes it gets a bit old. Not to mention, Shido isn't even a major participant in most of the episodes. Like Miyu TV, a great deal of a lot of the episodes is just watching the stories unfold with people, and then Shido somehow is thrown into about 3 minutes to recognize it's a nightbreed, and to do something about it. Other than that, it's the same old stories we've seen already, every episode.

In addition, the timeframe is weird. The episodes don't all take place at the same time, they jump around as far as what year it is. Sometimes this is easy to understand, but other times we wonder exactly WHEN this current episode is taking place.

So, in general, Night Walker has a really poor story. There's no continuity, which is sometimes ok for episodic series, but at the same time the individual stories are totally uninteresting and formulaic (most of the time). No ending too, which is not a plus. Overall, very lackluster and at the very best, average storyline.

For the late 90s, it's fairly unforgivable how bad the animation was. The roughness of the animation combined with the often dull colors and inconsistent line thickness made me positive this was made in the 80s, but little did I know it was actually made in the late 90s! Had this been made in the 80s, I would have said the animation was fine, even good for that time. For the late 90s though, seriously ridiculous. Nonetheless there still were some interestingly animated scenes that were rich with color and life. Specifically, whenever we saw a nightbreed in its full glory, the monster that was shown was usually kickass and creepy. The scenes of the city at night were always impressive, making it look very cyberpunk and, well, 80s. Most of the episodes took place at night so the lighting was always well done and the streets were lit up with colored lights and such. Blood and violence was aplenty, and was portrayed well through the use of sounds and visuals. For example, a nightbreed eating a human or animal would appear jerky and stiff (creepy and effective) and the noises would sound like crunching bone, also creepy. Special effects were often super cheesy (again, reminding me of the 80s) with Shido pulling out some sort of laffy-taffy neon whip of sorts that glowed in an oh so ridiculous way.

All in all, decent animation... FOR THE 80s. For late 90s, laughable most of the time. Though there were some interesting parts, the rest of the time ruined it.

Such a high score, eh? The intro song to NightWalker is probably one of the best and most appropriate that I've ever heard. So much that I actually listened to it most of the time, instead of skipping it! A man sings with a very 80s sounding track behind him. Since the entire series seemed like it was from the 80s, and the mood was very dark, mellow, and filled with style (sort of), the music fit perfectly. Music throughout the series was good as well, fitting in the background and lending to the mood. The outro was not quite as good as the intro, but had the same male voice singing. Great voice actors for everyone involved.

NightWalker was 100% episodic and thus, not a lot of characters were developed. We did learn about Shido's past (and how he became a vampire), but still, his past wasn't gone into in too much depth. Thus, we didn't necessarily feel sorry for him that he became a vampire. Riho is definitely developed in quite a different way, and that, really, is the only plot point that spans several episodes (but still not much). We do see a character development episode with her, as she interacts with schoolmates, and that was a decent episode. Yayoi is developed basically zero and we know little to none about her. The green fairy is developed zero, though we do see an episode where Shido meets her/him for the first time. We are introduced to various characters in each subplot, but for the most part we don't see them again after the episode (with one or two exceptions). Again, I'll draw the parallel to Miyu TV as far as the characters. Poorly executed and too shallow to deserve a good score.

Overall, NightWalker was terribly disappointing and was a waste of time to watch. If you feel like you should watch every single vampire series out there, I still don't think you should watch this. The overall plot was tepid, the episodic nature was too formulaic and got old really fast, the characters undeveloped, the animation looking like it's from the 80s, and in general, it was just BORING and it's hard to explain why. Top that off with the lack of an ending and you have a very generic and average series. I still gave it a 5 for the music aspect, the occasionally neat animation, and the IDEA of the plot that ended up sucking (vampire detective agency, finding monsters and vanquishing them). Overall, this isn't one to watch.

Alright, first off, this show is not one for those that want an answer right away. It doesn’t even have a rather good ending in my mind because it leaves as a cliff hanger. Some things in the story feel left out and just thrown in at the last minute as though they tried to stay to the game storyline but also change it for a monster by week style show.

Tatsuhiko Shido is the perfect vampire in my mind. He is hunted by his past and looks to set things right though he can’t stop who he is. He drinks blood and can’t go into the sunlight most of the time it seems (Sometimes it seems they forget that as we see him in the sun once in a while). Almost everything about a traditional vampire is in this and they add a few extra things. I love the idea that he can create a sword with his blood though he doesn’t do it all that much.

Yayoi is a rather sexual little thing, and she and Shido have an interesting relationship. She gives him blood in exchange for help on nightbreed cases. Again, we don’t get much from her.

His little fairy girl, Guni, is just a bit to much like Navi in how annoying she is. Most of the time, I just wish she was silent because she just doesn’t do anything for the story. She sits in his hair and barely comes out except to say something annoying.

Riho is an interesting little girl. We really don’t get much of a story line except that she lost her parents in a nightbreed fight. She is turned into a vampire by Shido in one episode and then almost whenever we see her after, she is just trying to cope with the change. We rarely see her but when we do, we get a sad sort of loneliness about her. She loves Shido a lot and has a pretty big jealous streak when it comes to Yayoi.

There isn’t much known about Cain except he seems to have a very sexual obsession with Shido. I guess it might be my yaoi fan girl thing, but it they do not hold back on the sexual lust this guy has for him. I really want to know why he changed Shido into a Vampire but they never really explain much about it.

As you can see, we don’t get much about the characters and so sometimes it is hard to feel for them when they are hurt but I feel even more for Shido. He’s more the only character I connect to. Even the story doesn’t help much. We don’t get a lot about this ‘Golden Dawn’ or about the backgrounds of characters. It seems deep but then it is actually a bit shallow.

The animation is pretty good, though the first 4 episodes are much better and not TV friendly because it was made to be an OVA. At some point, they decided to have a whole TV show of it and the quality dropped. I can somewhat understand since the first 4 don’t really don’t work as just a story, I just wish the animation didn’t suffer for it.

The English voices are pretty good. Shido has this gentle gruff of his voice that’s perfect for a detective and yet also has an air about someone mysterious. It’s pretty much the same with Cain who is voiced with Lex Lang though he does not hand many lines. I really love the music in the opening. It is rather a hunting tune. The ending song is alright, though not the best. It just feels like a sappy love song when there isn’t really all that much love in the show. The background music works well and has a rather detective feel to it both in English and Japanese.

I initially watched this anime because it was about vampires. Then I caught onto the story line, and my inner yaoi fangirl squealed at all the hinted romantic history Shido and Cain, but I got very tired very quickly of Riho, who was very annoying. I didn't really like her character design either.

It's okay. Not a masterpiece, but I'd reccommend watching it if you like vampire anime.

A mix of mystery, drama and somehow comical atmosphere, in small doses for a retro vampire detective  series.

Episodic in the beginning, it turns out to have a huge development in the story, but what we see is more like a kaleidoscopic view of main character's life. Everything gets explained in the last three episodes, but still not fully.

Interesting but nothing special...