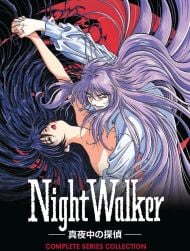 Alright, first off, this show is not one for those that want an answer right away. It doesn’t even have a rather good ending in my mind because it leaves as a cliff hanger. Some things in the story feel left out and just thrown in at the last minute as though they tried to stay to the game storyline but also change it for a monster by week style show. Tatsuhiko Shido is the perfect vampire in my mind. He is hunted by his past and looks to set things right though he can’t stop who he is. He drinks blood and can’t go into the sunlight most of the time it seems (Sometimes it seems they forget that as we see him in the sun once in a while). Almost everything about a traditional vampire is in this and they add a few extra things. I love the idea that he can create a sword with his blood though he doesn’t do it all that much. Yayoi is a rather sexual little thing, and she and Shido have an interesting relationship. She gives him blood in exchange for help on nightbreed cases. Again, we don’t get much from her. His little fairy girl, Guni, is just a bit to much like Navi in how annoying she is. Most of the time, I just wish she was silent because she just doesn’t do anything for the story. She sits in his hair and barely comes out except to say something annoying. Riho is an interesting little girl. We really don’t get much of a story line except that she lost her parents in a nightbreed fight. She is turned into a vampire by Shido in one episode and then almost whenever we see her after, she is just trying to cope with the change. We rarely see her but when we do, we get a sad sort of loneliness about her. She loves Shido a lot and has a pretty big jealous streak when it comes to Yayoi. There isn’t much known about Cain except he seems to have a very sexual obsession with Shido. I guess it might be my yaoi fan girl thing, but it they do not hold back on the sexual lust this guy has for him. I really want to know why he changed Shido into a Vampire but they never really explain much about it. As you can see, we don’t get much about the characters and so sometimes it is hard to feel for them when they are hurt but I feel even more for Shido. He’s more the only character I connect to. Even the story doesn’t help much. We don’t get a lot about this ‘Golden Dawn’ or about the backgrounds of characters. It seems deep but then it is actually a bit shallow. The animation is pretty good, though the first 4 episodes are much better and not TV friendly because it was made to be an OVA. At some point, they decided to have a whole TV show of it and the quality dropped. I can somewhat understand since the first 4 don’t really don’t work as just a story, I just wish the animation didn’t suffer for it. The English voices are pretty good. Shido has this gentle gruff of his voice that’s perfect for a detective and yet also has an air about someone mysterious. It’s pretty much the same with Cain who is voiced with Lex Lang though he does not hand many lines. I really love the music in the opening. It is rather a hunting tune. The ending song is alright, though not the best. It just feels like a sappy love song when there isn’t really all that much love in the show. The background music works well and has a rather detective feel to it both in English and Japanese.

I initially watched this anime because it was about vampires. Then I caught onto the story line, and my inner yaoi fangirl squealed at all the hinted romantic history Shido and Cain, but I got very tired very quickly of Riho, who was very annoying. I didn't really like her character design either.   It's okay. Not a masterpiece, but I'd reccommend watching it if you like vampire anime.