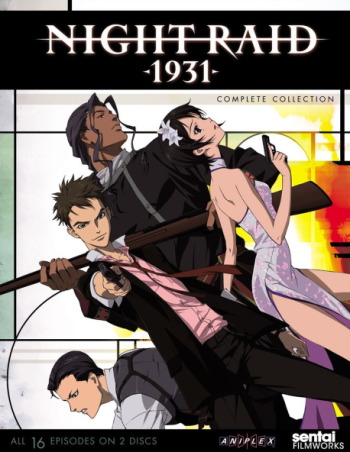 Senkou no Night Raid relies on the ‘random stories in the first half, actual plot in the second’ formula, which, in my opinion, hardly ever works. The whiplash-inducing tonal shifts usually do their series a disservice, and this one is no exception.

The beginning section wastes time on inane plot points, such as the characters photographing food for seven minutes, immediately followed by an equally ridiculous scene in which the two protagonists chase a cat around the city for a while. This took up an entire episode.

The actual plot kicks in at the seventh episode, which contains a comprehensive history lesson about the political climate in Japan/Manchuria in the pre-WWII era. Western schools, at least any I’ve attended, rarely touch upon Asian history, instead focusing entirely on the European stage when discussing the events leading up to and encompassing World War II. Besides a brief detour into how awful Pearl Harbor was, they entirely ignore the role of Japan in these proceedings, robbing students of crucial knowledge.

I respect Senkou no Night Raid for being ballsy enough to address the Manchurian Incident, which remains controversial in East Asia almost eighty years later. For the uninformed, the Manchurian Incident (or Mukden Incident) is when the Japanese bombed a small section of their own railroad network in northern China, blamed that bombing on the Chinese, then used this as a pretext to invade the region. However, Senkou no Night Raid doesn't devolve into a revisionist history, or shy away from portraying the Japanese as the bad guys. I wish I could reflect my admiration for that in this score, but the hard-hitting political latter half is oodles less interesting than the fluffy Buddy-Cop-esque first half. Even though I love history, I had to take numerous lengthy hiatuses from this series, because it just wasn't interesting.

I suspect the show itself doesn't trust that it is interesting, as it adds the gimmick of giving its protagonists superpowers; these feel tacked-on and half-baked as they are rarely used.

It features the only recap (between episodes 6 and 7) that I would actually recommend to someone. Well aware that you’ve watched all the previous episodes, the recap deftly weaves the first half of the story together, as opposed to just throwing together a sloppy cut-and-paste job to stall for time. The reiteration helped me piece together all the plot threads, which is especially useful since it happens right before the brunt of the story hits.

While solid, Senkou no Night Raid’s animation could hardly be considered extraordinary. It looks no different than any of the other scores of “realistic”-looking series in the genre. Panning is occasionally choppy and the series displays a marked over-reliance on earth tones, which were unbefitting of the vibrant setting of burgeoning Shanghai, though it is fairly adept at animating bustling crowds.

I appreciate that the series attempts to make characters speak the bevy of foreign languages that an actual international spy would be expected to know. Some shows would just imply that they must be speaking various languages (Nodame Cantabile often fell subject to this), or worse- pretend that everybody everywhere speaks Japanese. Whether or not the seiyuu can pronounce these languages is another matter entirely. Secret agent/lead character Aoi’s seiyuu is a particularly egregious offender- I could barely differentiate between his Japanese, Mandarin, and …was that Russian? Perhaps German? Some hellish synthesis of the two? I’m usually good at differentiating between languages, so the botched tongues that Senkou no Night Raid forced down my throat were distracting and destroyed the suspension of disbelief.

Series about adults instead of teenagers with varying degrees of angst are always refreshing, even when those adults aren’t very interesting, as is the case here. The show’s first half subtly but adequately builds up its characters purely to justify their actions in the second, as they are far less important than the plot.

Average in all fields but ambition, Senkou no Night Raid careens about, so desperate to find something, anything it excels at, that even my bias towards period dramas couldn’t bolster my enjoyment of this show. Huge history buffs or those so sick of the 'moe' trend that they're willing to watch anything promising "serious business" may enjoy it. Otherwise, the only way this series could benefit the anime community is if it manages to entice its audience to go out and research history on their own, since the actual events of the Manchurian Incident are far more interesting than these fictionalized ones.

I think Night Raid is a great show for people who liked Cowboy bebop. The story of night raid is pre world war 2 and has many character side storied which follow the main story, the character can span 1-3 epsodes which allows the viewer to understand character better. Although the main sow is small in has many specials which allow the viwer to under the story and plot better. I personaly think the show is underrated compared to many other shows of the same genre.

The story feels fairly original and does a good uncommon job of introducing the major characters. Aoi is the pseudo squad leader and acts sort of like a Japanese/Western blood version of Sherlock Holmes.  He is pretty intelligent and has a great grasp of tactics and an uncanny sense about people and events that almost seem supernatural as if he has a second superpower.  He is the most interesting and diverse character in the anime and the character most frequently focused on.  There is Yukina who peculiarly at times seems to get too lost in the background almost as if she becomes part of the environment.  The way the stories sometimes pull so far back from her, it places her into the position of a very minor or forgotten character that just hangs somewhere in the background, but other times she is a central part of the stories.  She comes through as a pretty well fleshed out charming character with a useful power albeit that is mostly relugated to support duty.  Natsume is similar in some ways to Aoi in that he is wise and seems to have unbelievable foresight into things beyond just his gifted superpower vision.  He is the most calm and quiet of all the lead characters.  Kazura is unpredictable though on the surface he gives the impression that he is more grounded than either Natsume or Aoi, in reality ***potential spoiler***he is full of grey thinking and doubts that lead him to betray his friends once or twice which makes him not very trusting character or one with much respect or dignity given how his demeanor usually projects itself onto others. ***  I don't care for Kazura much because he is too unpredictable but he isn't as loose in morals or despicable as Shizune.

In another vantage point, I can't help feeling a sense of Japanese arrogance, self importance, or hints of a superiority complex.  Now and then, some animes seem to project that subtle but negative view point of Japan probably from a few worthless people in Japanese society whose only recourse are ways to put down others to feel superior as the types of people they are.  ***Potential Spoiler***In reality that gives a negative view of themselves, their nation, and even humans in general.  It feels a bit like that in this series regarding the scientist working for Captain Takachiho when it is implied Japan develops nuclear weapons first as if those low life types need some kind of national pride ego boost.***

I do not care for watching anime or elements of anime that feel more like biased fictional propaganda.  Thankfully though, this quality is not that heavy handed.  It would be an interesting fictional what if story, if not so many other anime didn't give off that vibe so much or so strongly.  At it's heart this is a what if hypothetical scenario married with a detective/spy thriller and supernatural super powers.  There may well be plenty of truth embedded in the tale but it is not so easy to separate what is or is not real unless you knew Japanese history or maybe modern Chinese history as well as a native of either nation.  The recurring villain main antagonist is one of those grey area murky water types, yet from a modern standpoint it is clear his way is wrong, from the time period and the valiant but flawed efforts to push the viewer into the Japanese citizen view point, makes a reasonable and valid arguement that, the characters or anyone in a similar situation might not be able to distinguish what really is the right choice.

What I Liked: Impeccable attention to detail on historical events, even going so far as to present a fictional "other side" account of the Manchurian Incident. Handles language well, as the members of the Sakurai Agency (and some others) are depicted as bilingual (with varying levels of fluency) and some scenes are completely in Mandarin. Great soundtrack adds to the action and suspense of the series. OP is catchy and animation-wise has a nice concept to it. The relationship between Aoi and Kazura.

What I Didn't: Not enough attention paid to historical dress - one character is a complete walking anachronism. Some other small anachronisms, like a mention of The Little Prince. Episode 7 might put some people off, since it (sort of) shifts away from the main story. Strong American accents on some British characters(!). Character development is sort of pushed to the wayside, as all the main characters get very little fleshing out beyond what's necessary to push the story along.

Final Verdict: This rather interesting series about a team of Japanese spies in 1930's Shanghai has left me a tad conflicted. There's great attention paid to historical detail that grounds the story in a truly fascinating time period where languages and morals intersect, the addition of a supernatural element works surprisingly well and the soundtrack is absolutely marvellous at matching the suspense and mood of the series. However, I unfortunately have to deduct points for the strange pacing around the middle half, lack of attention to historical dress, the underwhelming ending and somewhat flat main characters.