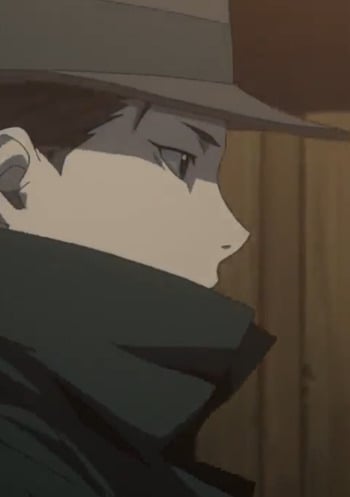 Unlike the last two OVAs, this episode seemed as if they were planning a second season that got nixed after they'd already finished it's first episode.

Occurring after the events of season one, this episode focuses pretty much solely on Kazura, a character who almost felt relegated to a minor status in the series.

For this one episode he is tasked to look into a planned coup happening within the army, and report back to the superiors. In the end he must choose which side he believes in, each possibly causing himself or those he cares for harm, be it directly or indirectly.

They actually put a nice bit of back story and a few surprises in this single episode, hinting almost as if we were going to have a second season focusing on Kazura and the army. If that was the case this was a great episode one, but even as a stand alone it was a very good piece of anime.

As with the other OVAs and the series, the animation is really great. Sure they make ninety percent of the characters look the same (racist asians thinking all asians look alike!!!!! Lol) but overall they do a great job.

I actually think they made the panther, used only a few times in the episode, look stunning. They created an animal only using various shades of black, but along with it's piecing yellow eyes, it’s animation looks gorgeous.

While everything stayed the same as the series, without an opening theme and lacking many of the characters, we unfortunatly get another mediocre audio experience.

There isn’t much new happening in this solitary episode. We learn a bit more about Kazura’s character and his feelings towards his, now former, teammates.

We also get a slight glimpse into the quiet Natsume, and the fact his younger brother is part of the army unit Kazura is trying to infiltrate.

Little things like that do help freshen up a series that always felt to be lacking in backstory and personal details.

This episode would have been a good start to a new season that appeared to have an interesting plot, but unfortunately that never materialized and instead we were stuck with that bad taste left after a subpar initial series.