Night on the Galactic Railroad 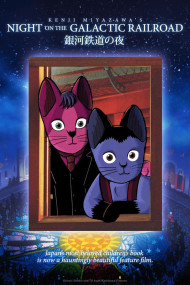 Giovanni is a young cat with a troubled childhood -- he is bullied in school, and waits patiently day after day for his father to return from his journey. One festive evening, Giovanni and his friend Campanella find themselves aboard a great train which takes them to the edge of the universe and back. However, in the midst of the sights and wonders, Giovanni soon begins to discover that the train's purpose might be much different than it appears.

Night on the Galactic Railroad (Subtitled)

Night on the Galactic Railroad (Dub)

StoryI always have a hard time recommending Night on the Galactic Railroad because it's not only an obscure title in terms of availability, but also in premise. For a children's story to have so many symbolic characteristics, and actually highlight themes such as growing up as a teenager and death is a feat in and of itself.However, most of the anime audience might find this perturbingly slow paced and dull...sad, because it really is a gem if you can understand the story it's trying to tell.In short, the movie tells of a young cat named Giovanni, poor and growing up in a struggling family with a sick mother; he seems like an outcast not only in the bane of society but also in school as shown by one particular scene at the beginning of the movie. The story ultimately comes into Giovanni and his friend Campanella, who take a trip on a night train that shows them sides of life and experiences they've never had before.  It also carries a heavier symbolism alongside the train, as it's reflecting upon lives and somehow leading into the place/existence beyond death. Many who watch this film the first time through may not get the themes or the heaviness the film comes to portray until the end when some revelations about both Campanella and Giovanni come to pass. It's very duly paced, I kid you not, and certainly not a film that many common anime watchers may come to appreciate unless they know the story before hand. I actually really enjoyed this, though I saw the film many years ago when I first started watching anime movies.Despite being very philosophical in premise, dark, moody, and not readily adherent to most audiences who like something more to happen in anime series, I gave it more considerable weight than what most would give it because I could understand it overall, and I liked what it had to offer. AnimationNight on the Galactic Railroad shows its age prominently with the animation, but surprisingly it's not necessarily bad for the year it was made (1985) nor is it ill...considering its animation adaptation from the original works. The dark settings of the film do well to compilment the atmosphere, not only in the night settings, but also in a rather dark premise when the heavier ironies of the story come to pass. For the most part, the animation stays consistent, and the coloring and design of the characters make it appropriate to display as a children's story, but quite grim. Giovanni, for some reason, reminds me of a design Miyazaki took with Totoro (perhaps the eyes), but it may have been simply reflective of the times and the respective characters, whom are cats. SoundThe music in this movie was, from what I could recall of it, very placid and fitting to each scene, and there's one piano melody that I remember from the film that still sticks in my mind to date. The scenes are often quiet and focus on the action of the scene taking place, such as the classroom setting. When it's most minimalistic, it works well and really gives weight to what this film really presents. Most anime viewers who watch this looking for action or upbeat J-pop music will not find it here. It's really a carefully plotted, thought driven movie, almost surreal. Voice acting in the Japanese version of this film is quite well done, and I liked that version the most. Even the English version wasn't bad at all, but surprised me with Crispin Freeman (Eureka Seven, Slayers) as Capanella, because I didn't think he'd fit the role with his typical casting spots, but he actually did a decent job handling the character. CharactersThe connectivity of the characters would really depend on how much you understand the movie and are not perturbed by the pacing, as it's very easy to lose footing and not find the emotion behind this film. Since it deals with themes such as death and coming of age, Giovanni sits right at the heart of the story with the realizations he has to face. He's a character that's easy to follow, but may not always be readily noted in his overall emotions. He's quite downcast pending the weight of his family problems and other factors, but when traveling with Campanella and watching the scenes on the train, you note his character a bit more and what he has to come to terms with. The secondary characters are given due time, but as mentioned, probably aren't given the true weight of their roles because of the pacing and overall sequencing of the film. OverallI really wish I could rank Night on the Galactic Railroad much stronger than i's current score, because I did take quite a bit from it as both a children's story and as a more mature, darker one. Unfortunately, I think the presentation doesn't age as well for many to be able to see the gem it really is. My enjoyment of it would probably rank, realistically, around an 8, but only on a personal ground. This is a film I'd hold my recommendation for because it's only for those who can tolerate and understand its message.

In all honesty, I’m not entirely sure what score to give this anime; I’m torn between two completely different opinions. Because of this, rather than just picking one, I'm going to list both. For the purpose of this review, they will be personified as "A-san" and "B-san." --------------------------------------------------------------------------------------- Pretentious, snobbish, pseudo-intellectual self: A–san Unsophisticated, ritalin-munching, mindless self: B–san A–san: Night on the Galactic Railroad is, without a doubt, a work of art; never before in my life have I seen such a meaningful and worthwhile experience. With the theme of adolescent growth, the anime provides a symbolic approach that is simultaneously insightful and captivating. Remarkably astute observations about the true nature of friendship, the affirmation of one’s religious beliefs, and the emergence into adulthood are made in the show, all through a medium dense with analyzable material. In particular, the characters work remarkably well as allegorical representations of classic archetypes of reality. The technical aspects of show are outstanding. Amazingly, despite being nearly 20 years old, the anime sports excellent animation; the imagery that is provided is incredibly poetic, and does much to stimulate the mind. Sound is also used very well throughout the film; voice acting is spot-on, the instrumental music is elegantly simple, and the sound effects do an excellent job of keeping the mood of the show. To conclude, this film should be seen by every self-respecting person who considers himself the least bit intelligent; anyone who dislikes this outstanding show doesn’t know good anime when he sees it. B–san: There are three words that easily describe Night on the Galactic Railroad: BBBBBOOOOORRRRRRRRRIIIINNNNNGGGGG. Never before in my life have I seen such a stupid waste of time. Nothing, and I repeat NOTHING, ever happens over the course of this anime. Oh sure, some random crap that nobody could possibly care about occasionally woke me up, but other than that the show is devoid of anything remotely interesting. The characters are also stupid as hell. They have little to no personality; all they do is stare at each other and talk in monotone voices. Why the hell should I be watching an anime from 1985 anyway? The animation is clunky and lame, and the sound is just silly. If I wanted to hear cheesy instrumental music I could turn my radio on to the classical station any time I wanted to, but I don’t. You know why? Classical music sucks ass; that’s why. I have no idea why I wasted my time watching this when I could have been watching shows like Scryed and Naruto. For anyone who watches this anime and pretends to enjoy it, I’d also like to recommend watching paint dry. You’ll be just as entertained by that. --------------------------------------------------------------------------------------- I think how much you enjoy this anime will depend completely on how much A–san is in you, and how much B–san isn’t in you. If you want to sink your teeth into a challenging, intellectual anime, then you'll probably enjoy yourself. However, if you want to be, you know, entertained, there are many better things out there. As for me... I suppose I’ll give it a 7/10 – good, but not necessarily great.

What I Liked: The characters are simple but charmingly designed. The whole movie is gorgeously atmospheric, with some brilliant set designs that are as dreamy as they are unsettlingly surreal. Animation is excellent for an 80's production, if not slow at times, with nice uses of imagery, light / shadow and colour. The themes of death, faith and one's legacy are handled with a surprising amount of sensitivity.    What I Didn't: Characters suffer from blank face syndrome. The soundtrack not only dates the film dramatically, but ends up being tonally inappropriate some of the time (e.g. Campanella's "disembarking"). First act is incredibly slow, but pacing does improve in later acts. Strong Christian undertones may deter some viewers. For a kids movie, it's not terribly straight-forward nor easy to digest.Final Verdict: Enigmatic, highly symbolic and incredibly surreal, Night on the Galactic Railroad is a doozy of a children's film that explores themes of faith, legacy and mortality with sensitivity and flair. Sure, it may be a little too heavy or sluggishly paced for the most part with a soundtrack that is easily the weakest aspect of all, but it is still a wonderfully animated film with complex imagery and pleasant character designs that stay with you long after the film is over. 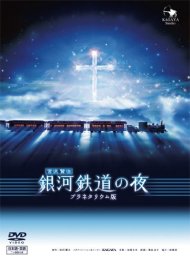 Night on the Galactic Railroad: Fantasy Railroad in the Stars

Night on the Galactic Railroad: Fantasy Railroad in the Stars Special