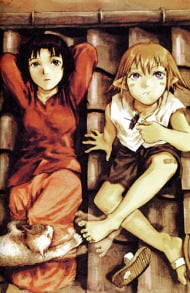 Watching Lain and then Haibane Renmei a while back got me on a bit of a Yoshitoshi Abe kick. What I very quickly realized was that NieA Under 7 is nothing like Haibane Renmei, or really, any of Abe-sensei's other projects. I found out later that NieA was what they worked on after Lain finished, and it was supposed to be a kind of break from the dark and heavy themes found therein. Furthermore and unfortunately for me, I was only able to get a hold of the English dub, which has very likely tainted my opinion of NieA herself. Story: It takes place in a small town in Japan, set in a future where aliens and humans both exist. Mayuko, a human, lives above a bathhouse; the alien NieA appears one day and moves in with her. The "main" storyline is that they're trying to save the bathhouse from shutting down, and the running gag is mainly that NieA is constantly eating an already-poor Mayuko's food or otherwise getting her into trouble. There are also some hints at uncovering details of the circumstances in which the aliens arrived in Japan/on Earth, but those world-building elements are ultimately discarded in favor of staging a significant fight between Mayuko and NieA to test the strength of their relationship. Episodic shows generally rate pretty low in my book, and this one was very average in terms of depth, complexity, and my level of tolerance for weak plots. Sound: Don't watch the English dub. NieA's obnoxious and childishly smug tone of voice still rings in my head to this day. Characters: None of them really show a huge amount of character development, and I found none of them particularly endearing. The aliens' personalities are somewhat flat, which contrasts with some of the show's themes about discrimination and stereotypes. Mayuko is, quite frankly, pathetic, and the other human characters are boring. Overall: Average-ness all around, but mildly entertaining nonetheless. Watch it if you're an alien or Abe-sensei buff, or if you like very average, episodic comedies with an oh-so-light dusting of social commentary.

First some items I need to adress. I'm Dutch to expect some spelling errors, if they are to annoying just message me and I'll fix it. My opinion may vary from others and this is fine. People are different so there is a good chance that I will not like what you love. Deal with it. I'm not telling you that you should hate it too, I'm telling you why I didn't like it. I'll try to keep swearing to a minimum but fail utterly on occasion. In general it is the more the anime pisses me off the more I swear so watch out for the low scored ones. Art: I had to check but this anime was aired in 2000... this surprised me. I would have guessed at early nineties at the latest. It is not bad in any way but I expected better for the rime period. These days almost everything is computer enhanced in some way and this looked to be hand drawn all the way. The animation does what it must do though. Sound: No real problems here either. I can't remember any of the music and that is how I prefer it. Voice acting is fine, NieA is beyond annoying but this is by design. Characters: Main character is Mayuko. She tries hard to make it through school and lives on her own, away from her family. Money is tight so she works hard at multiple jobs. She is often annoyed with NieA who is the exact opposite of her. NieA is a young alien girl who is essentially a squatter who lives with Mayuko. She is lazy and only looks forward to her next meal. Where Mayuko is quiet and reserved, she is loud and very present. Story. It is a number of years after a massive UFO crashlanded on Earth and aliens are now living among the human population. Mayuko tries to make ends meet between going through school and making money to pay the education fee and living expenses. Unfortunately for Mayuko, her room came with its very own alien, NieA. Rant. This anime has one mayor failing and that it is extremely boring. Nothing of note really happens and most of the comedy failed to get a rise out of me. Every now and then I did chuckle a bit but nothing much. As a comedy this isn't my thing. Back to the boring bit, the reason for this is very simple: there is no story arc. To be fair, there probably is but it was not ably to hold my attention as there was to little of it to do so. Also unfortunate is that NieA is beyon annoying. She contributes nothing to the dynamic of the 2 main characters. I care about Mayuko as she has been dealt a bad hand in life but works hard to make something of it. You really want her to succeed as you watch her go through life. You get the strong impression that she would have been much farther along if NieA wasn't there leaching off of her. NieA is also very loud and completely focussed of getting food. Many hijinks start because she ate everything or she chases after Mayuko, looking for food. If you are interested in this series, just watch the first episode online. If you like it then go ahead and watch the rest as pretty much everything is the same. 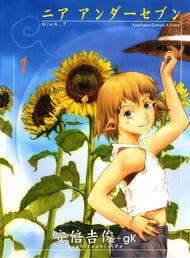