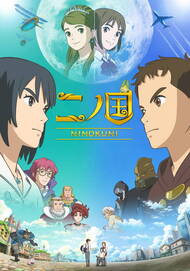 What a waste of time and effort to create a movie but end up with what feels like a rough summary of a 24 episode anime - you get the plot but bare of any tension, development,  character growth or even emotional attachment as the viewer. And to be honest, the plot isn't that great either. Twists, or what is implied to be such, can be foreseen way to early and do little to the overall progression of the story, since everyone is way too OP to even care.  The biggest problem in this plot are the coincidences, but also every single challenge for the MCs being super easy, barely an inconvenience. The main conflict between the lead duo is neither going deep enough to make you care, nor is it lasting long enough to develop. With this, the main plot becomes a side story and it's really annoying to see bad storytelling ruining an actually not too bad idea. With neither the animation, nor the sound being able to go beyond the realm of lower average, and since the characters are more of an ensemble of stereotypes and standard tropes than fleshed out beings and thus no more than two-dimensional sketches, the movie itself is more than just bad: it's disappointing, as you can easily imagine, how this could have been an actually quite entertaining and good anime.

So in case any of you guys want to watch this, it is available on Netflix.  This review may contain some spoilers but overall, there isn't much risk reading this.  Anyways... Story So i heard that this anime movie was originally a video game.  The concept and idea is actually really good. So basically there are two highschoolers, Yuu and Haru.  Haru has this girlfriend, Kotona, who is also great friends with Yuu.  Kotona gets involved in an accident, then somehow Yuu and Haru stumble on a magical parellel world, much like their own, and guess what that world is called? NINOKUNI! The world is filled with dopple-gangers from their original world.  They try to find Kotona, and they found her, sike.  It is actually her dopple-ganger, this world's "Kotona" (I forgot her name sorry) is a princess.  Anyways, stuff leads to other things and now Yuu and Haru have to make a choice (and i can't tell you without giving spoilers).  Yes, there is an ultimate plot twist at the end.   That is the summary.  Now, that sounds pretty good, right?  The trailer for NinoKuni is reALLy misleading.  If i had just watched the movie without the trailer, maybe i wouldn't have been disappointed BUT I DID.  Honestly, i feel like the trailer is better then the movie.  I may be exaggerating a little when i say the trailer is really misleading but in the movie, they don't even make the "big choice".  The trailer was so good, it got me hyped because i thought the movie would be an emotional roller coaster- Keep in mind that maybe it just wasn't the anime for me, so you guys could still really enjoy it! Link for the trailer --> [CLICK HERE] So heads up, this trailer is an english dub, don't worry the japanese dub is available in the movie.  i couldn't find the actual video but we do what we can.   Animation To me, the animation wasn't anything special but overall, the art was quite nice.  The style of the characters isn't really my cup of tea.  But like, the animation wasn't bad or anything.  Don't have much to say on that.  The character design was really unique (for all the creatures and stuff). Sound i hardly ever pay attention to the music but i rewatched the trailer and it was fairly good.  The sound, as in the audio, was not unique or anything but you could hear every word clearly so yay. Characters One thing that really bothered me in ninokuni is that everyone was so OVERPOWERED.  Like the fight scenes weren't that fun to watch because everyone was busting out moves that was so OP...  This could be a spoiler--> Some point in the movie, an old man who was trying to come back to ninokuni pops out of nowhere (literally so random but oh so convient for our dear MC yuu) hands him the ultimate op sword.  All the other characters were like 'omg the sword that appeared in the legends *le gasp*'.  The sword was never mentioned before but the movie mentions it at a convinient moment like its supposed to mean something to us.  Mc: Yuu. So overpowered i couldnt-  Other mc: Haru, this dude was my favourite but he was so dumb, no offense.  He came to a conclusion (in about the middle of the movie)  with all the evidence pointing the other way.  Yuu tried to convince him to see the most obvious facts ever but he just ignored it? why bruh.  At the end, he comes to another conclusion, which is actually pretty smart.  But the ending speech from him seemed so rush and how he got to the ending conclusion was also very rushed.   Princess Kotone (this isn't her real name, i forgot it, i'm so sorry) and all the other characters didn't contributr to the story as much i hoped they would but they weren't bad or anything. Old man: honestly, his character was quite pointless to me.  As if his only use was to pop out to give the mc the op sword and, keep in mind he had been trying for YEARS to come back to ninokuni, he just decided to go back to our world as if all those years trying to come back to his home was nothing... Summary: Overpowerd and no depth. Overall I didn't hate this movie, i was just so disappointed.  There was so much hype built up in the trailer, that just seeing the movie was disappointing.  The whole plot seemed so cheap at the end.  Like i said somewhere in the middle of my review -->  Just because i didn't enjoy it doesn't mean you wouldn't too.  Another thing i have considered is that maybe the movie was aimed at a much younger audience them me, since the scenes are too convienient and simple.   Edit: Someone mentioned that they did in fact talk about the sword before.  I didn't remember it at all because the movie was boring to say the least.

In all honesty, it's okay at best. Not my favorite movie and watching it right after finishing the original game, it's just not the same. The animation is decent and it has beautiful scenery, but the story was just bland. It's just about two boys who fall in love with the same girl, fight over her, realizing the fighting is dumb and then work together to defeat the main villain who you don't even really meet properly. It's good if your desperate for more Ni No Kuni content, it's mediocre though. You'll get a better experience just watching all the cut scenes from the games. It's the kind of movie you put in the background as noise. I feel like if Ghibli actually made this movie, it wouldve come out better. 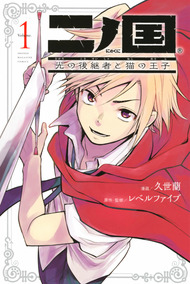 Ni no Kuni: Hikari no Koukeisha to Neko no Ouji