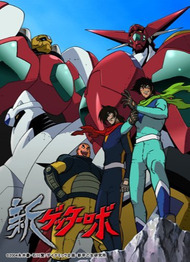 Humanity is under attack by the Oni - fierce demons of unknown origin - that can only be defeated by Dr. Saotome's Getter Ray-powered robots. However, these robots are only a stopgap, buying time for the next generation of Getter-powered robot: Getter Robo. Able to change shape into three combinations to suit the current task, and vastly more powerful than its predecessors, Getter Robo requires three pilots to fully utilize it. Dr. Saotome selects three interesting individuals for the task: Ryoma Nagare, a headstrong martial artist; Hayato Jin, a power hungry terrorist; and Benkei Musashibou, a bear of a man who has turned to the way of Buddha. Together, these oddly-matched teammates must find out where the Oni come from and stop the threat that they pose.

StoryThere's nothing wrong with tacky mecha shows. Take the recent Tengen Toppa Gurren-Lagann, Gainax's tribute to the 1970s super robot genre - it has all the markings of super robot but adds fully-fleshed characters and a funkier concept design for a modern twist. New Getter Robo, on the other hand, is the condensed reworking of Go Nagai and Ken Ishikawa's Getter Robo manga from 1974, and its main achievement is to develop with the least amount of effort and the most amount of tastelessness. Thus, while both aspire to update the same mecha traditions for the post-2000 generation of anime fans, the difference is that New Getter Robo fails. The first few episodes function well enough as introductions to the setting and characters. During this period, the show blunders charmingly from one contrivance to another, with its desperate pretenses of masculinity coming across as unintentional humour. When knife-throwing assassins corner the hero Ryoma Nagare in his house, he pauses after some back flips to drink water from a ladle. This doesn't make sense. Who would stop for a drink in the middle of a fight no matter how thirsty? The answer comes when one of the blades strikes the ladle from which he is drinking, severing it clean in half. 'Wow!' we're supposed to gasp. 'Almost getting killed by a knife is so cool!' Fast forward a few episodes, and that endearing idiocy becomes a huge annoyance. The story turns into the kind of mess that, were it written down, would read like fanfiction. The antagonists are no more than hordes of mindless monsters called Oni (they might as well be called orcs or gremlins or smurfs for all the originality shown in their design) who turn out to have an off-world origin. Cue Ryoma and his Getter Team hurtling into a banal alternative reality adventure set during the 8th-11th century Heian period... but with guns and mecha. And then things get really crazy. Ryoma subsequently time-travels - what, again?? - to a future Japan where humans have grafted their bodies onto robots and spend their days farming each other for parts. With too little running time to carry out any involving world building, these distorted timelines only serve to prop up stupidly long mecha duels and exhaust my patience. And about those mecha fights, screams of 'Getter Beam!!' and 'Getter Tomahawk!!' quickly lose their lustre when Getter Beam is always deflected, Getter Tomahawk is always blocked, and the monster dies only to come back to life bigger and stronger than ever before. What's more, Onis hurl themselves in neverending streams at the heroes just to end up as fountains of blood or a confetti of limbs. Meanwhile, Ryoma is too much of a man to sustain the same wounds for more than one episode, let alone die from them. I won't fault New Getter Robo purely for such contrivances since they are trappings of its genre in the same way that batons are prerequisites for magical girls. In fact, after having watched TTGL, I expected them as part of the fun. Annoyingly, New Getter Robo appears not just trapped in its genre but unable to make anything else - its narrative, characters, or animation - relevant to anyone who wasn't there in the 1970s.AnimationI'm still confused as to whether New Getter Robo's flat, choppy animation is stylised or just bad. Some traits, like the 'porcupine' hairstyles and garish colour schemes suggest the former; the boring mecha designs and flat colours, on the other hand, also cheapen the aesthetics.SoundThe US dub, I'll point out, is probably the single best thing about this show (God knows, the tuneless background music is definitely not). Given the crass nature of the series, the corny dialogue actually seems appropriate. However, the accidental corniness of the US actors, who sound desperate to play it straight, works better than the Japanese dub, which is too conscious of the show's shortfalls.CharactersThe first we see of Ryoma is him explaining his financial debts to some gangsters in a dingy alleyway. Since begging sarcastically for their mercy doesn't work, he resorts to using his black belt karate skills to decorate the alley with their bodies. Ryoma's introduction has a ruthless efficiency about it that I can almost admire. The point is not to wow the crowd with stunts, since the animation is so terrible, but to illustrate in unapologetic terms the flashy machismo on offer. It made much of Ryoma's later behaviour appear completely natural, like when he urges his companions to follow an Oni into a roiling portal with the line, 'If there's a hole, a guy's just gotta be ready to thrust into it!' Ah, men. His two colleagues in the Getter Team offer far less by way of amusement. Hayato Jin, for instance, undergoes a 180º personality change. A complete psychopath who makes his debut by killing all the followers in his own gang, he nonetheless morphs into the quiet voice of reason in the Getter Team within two episodes. Benkei Musashibou, at least, is consistent - consistently fat, stupid, and perverted. At this point I trust a description of the bad guys is no longer needed.OverallNew Getter Robo should have attempted meatier characterisation. It should have avoided as many alternative dimensions and future Japans as possible, and it should have had much better animation. Instead, mecha fans will have to settle for endless battles, silly monsters, and all the gore Go Nagai could dream of. 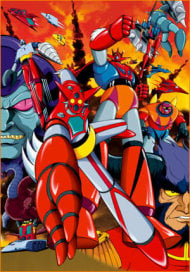 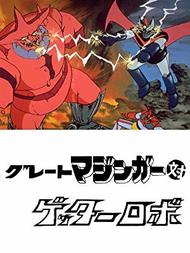 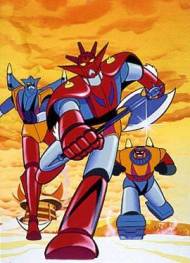 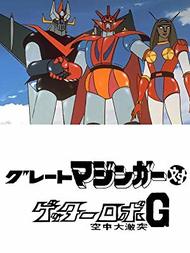 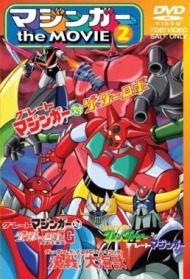 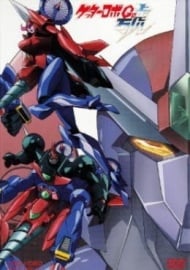 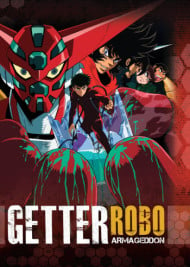 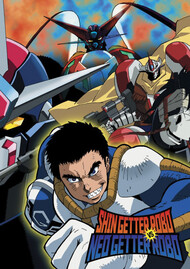 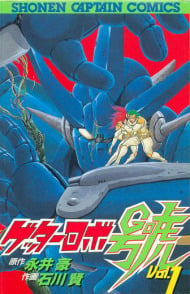 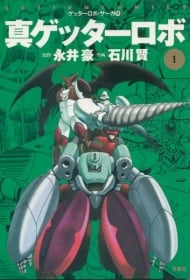 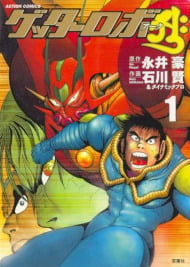 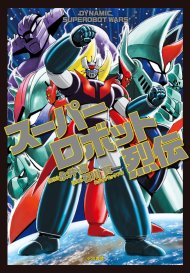 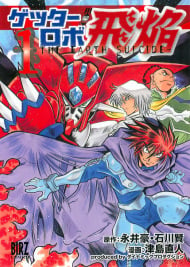 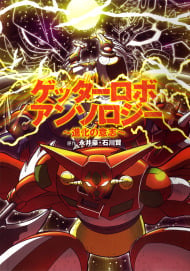 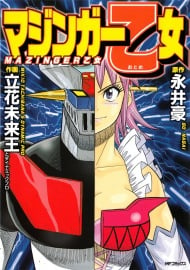 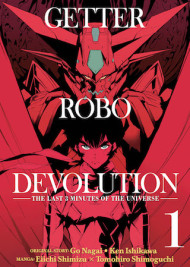