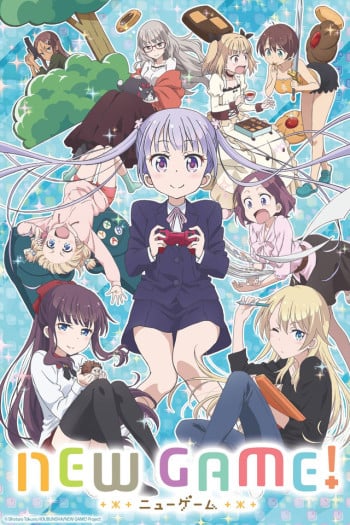 New Game! Episode 2 - So This is an Adult Drinking Party...

It's Suzukaze Aoba's second week on the job. She's learning the job quickly and gets assigned to her first project. At the end of the week, the character team throws her a welcome party. With alcohol coming and going, Aoba gets one step closer to adulthood.

So This is an Adult Drinking Party...

What Happens If I'm Late to Work?

That's How Many Nights We Have To Stay Over?

Do We Have To Come Into Work?

There Were Leaked Pictures of the Game on the Internet Yesterday!

One of My Dreams Came True!

It is somewhat similar. Its about making anime, which is similar to making games. Its more realistic in the age and their looks, unlike aoba who is 18 with a 13 year old body.

Work place setting, and following their dreams. The two stories mirror the struggles of production and creation.

Although Shirobako is mainly focused on anime creation and New Game on videogame creation, they both let you in on how the industry, works. New game being more of a cute comedy and shirobako a more acurate like portrayal. The atmosphere of teamwork in both is what makes them similar in my view.

Both are a lot of fun while lightly touching on the trials of making a video game.

Another cute girls doing cute things anime in which the cute moe girls create games in order to build up popularity of the club/company and so on. These two shows are really similar in how they present themselves and the elements that are in them. The main diffrerence is where both are set, one in a workplace whereas the other in the generic high school. I would say if you liked one of these anime then you should like the other.

Both serieses have a similar premise, bota are simply about the interactions of super cute girls, with some funny scenes and absolutely no mach of a bigger story. The differecne is that GB beta fails in it's premise miserably and here comes New Game which does it right :)