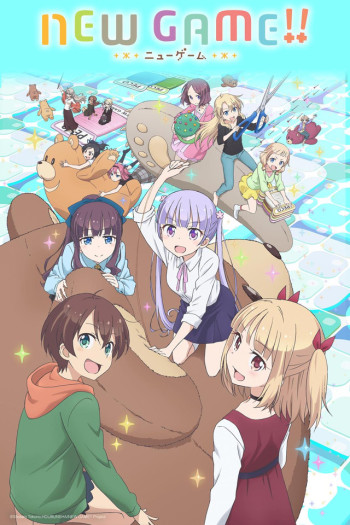 New Game!! Episode 1 - Of all the embarrassing things to be caught doing...

It has been a year since Aoba had graduated from high school and joined the game production company, Eagle Jump, and now, the season to welcome new employees has arrived. Aoba is very excited about the fact that she’s now in the position of Ko and her other senpais who had helped her out when she first started and didn’t know left from right. She rehearses her greeting in front of the entrance of the Eagle Jump building, but then Rin tells her the shocking truth...

Of all the embarrassing things to be caught doing...

This Is Just Turning into Cos-purr-lay!

Hey! Don't Touch Me There!

I'm Telling You, I Want a Maid Café

At Least Put a Shirt on!

It's Gonna Really Break the Immersion

What's Hidden in Your Heart

Make Sure You Buy It

I think this anime should be a recommendation for people who liked "New Game!!" in a series of ways. Both "Miss Kobayashi's Dragon Maid" and "New Game!!" have a large amount of humor in them. They both hold characters that are "Dandere" like (quiet, shy, and typically wear glasses), but also have fun, outgoing characters.