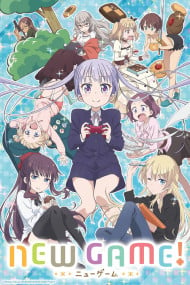 After graduating high school, Suzukaze Aoba joins Eagle Jump, the game company that developed Fairies Story, the game she obsessed over as a kid. On her first day as a working member of society, Aoba heads to work swaying in a packed, morning rush hour train. She manages to get to the office building all right but hesitates, wondering if it was really okay for her to take that last step and go inside. That's when a senior member of staff, Toyama Rin, shows up at work and safely leads Aoba inside the offices of Eagle Jump.

For those of you who haven't read my reviews before, le tme just say th at there will be spoilers, so read at your own risk. Back in 2014 Shirobako struck the anime community. One of the most polarizing anime in recent memory, it received mcuh praise for probably begin the first anime to delve deep into the anime industry and what creators have to go through to produce the anime we love. I was bored when I first watched the show weekly, but recently re-watched it all at once, and I found it much more enjoyable; it’s the prime example of an anime that suffers in quality if it’s not marathoned. While a good show, many people voiced two interests; the first was to view a show much bleaker in tone and more cynical about the anime industry. For that, we now have Girlish Number, which Digibro already reviewed so I’m not gonna touch it. The second interest was to have the same story told about the video game industry. For that, we’ve got New Game, the first season in 206 and the second season in 2017. there are noticeable differences. New Game focuses more on moe blob and comedy than Shirobako, but both are lighthearted representations of their respective artistic industries. The biggest criticism I see for New Game is that it’s TOO lighthearted, and a video game company run like this one would never survive. Keep in mind, these same people love Shirobako has similar optimism when it comes to anime projects. While the characters in Shirobako appear to be harder workers than those in New Game, I just think they chose not to SHOW all their hard work in New Game because they wanted the main focus to be Slice of Life. I mean, they do make significant progress in their projects, so clearly the must be putting some effort into their work. The original creator of New Game was Shotaro Tokuno. Before writing the manga, he was a member of the video game company tri-Ace, who are known for two specific series, Star Ocean and Valkyrie Profile. It stands to reason that, if the focus strayed away from the struggle of game development, it was probably intentional; in fact, I know it was, because Tokuno said so himself. He knew how painstaking, and sometimes thankless, the video game industry could be, and wanted to create a series using that as its framework, without actually presenting the reality of the job. Besides, you shouldn’t pretend Shirobako is much different, because it’s not. While you could argue that the trials presented in Shirobako get more intense, it’s still incredibly optimistic. Like I said, watch Girlish N umber if you want a more accurate interpretation of the anime industry, not Shirobako. I’ll link Digibro’s review in the description box down below. New Game is a ton of fun from start to finish, and even manages to work in heartwarming character moments too, especially at the end of the show. I love thse characters, each of them are entertaining in their own way. My favorite is Ko Yagami, the lead character designer for Eagle Jump. I love every aspect of her personality. She’s usually goofy and laid back, but can also be brutally honest and is an extremely hard worker. I personally related a lot to her work ethic and perfectionist nature. Like her, I often work through many nights to finish projects I have ongoing, such as what I’m doing right now with this script. Of course, she’s not the only character who has this work ethic, she just seems to have it the most; character traits like this helps give New Game a tiny bit of realism, even if it’s not enough to please everyone. I’d be remissed if I didn’t mention the most marketable aspects of the show; the moe art style and the goofball comedy, which are top notch. This is probably the cutest anime I’ve seen since GochiUsa, which believe me is high praise, and these characters are legit hilarious a lot of the time. I’ve mentioned this before but I don’t usually like comedy in anime, and this is one of the few that’s able to get many laughs out of my during most episodes. Of course Ko Yagami provided most of those laughs, but Nene Sakura and Hifumi Takimoto come in a close second and third place respectively, and each of the other girls get their moments here and there. Plus, each one of them are friggin’ adorable, and it’s the type of show where I have to question my manhood each time I watch it. This is another area where it differs from Shirobako. Shirobako, while possessing a slight bit of cuteness in the expressions of it’s female characters, isn’t trying to be a moe blob anime; hell, not only is New Game obviously more adorable, but there’s almost no male characters, definitely not from the main cast, and the characters in Shirobako are drawn to be visibly older thant hose in New Game. One of the many rules of moe blob anime, the younger they look the cuter they are. New Game just makes me smile, it’s as simple as that. Even during scenes that are clearly attempting to get me emotional, like the ending of season 2, when Ko Yagami leaves Japan to join a different company, I still have a smile plastered on my face because of how likable the characters are. I’m not sure if that’s praise or criticism now that I think of it. New Game is a fun, funny, heartwarming, criminally adorable anime that deserves to be watched, regardless of what others say it IS the Shirobako of video games in many ways, it may be idealistic and optimistic about the industry, but to complain about that would be to suggest that Shirobako wasn’t as well, which is simply untrue.

Positive *First thing that I liked in NG was the character design and with that the overall color palet that the studio used. NG was supposed to be a lighthearted, fun anime and the studio emphasized that perfectly with the bright colors that it used throughout the entire anime. It’s such a simple but effective thing to do, you can make an anime that much more fun by using the right colors. And that fun character also radiated in the character design. Here in particular I liked the eyes of the characters. There was a certain sparkle to them that gave the characters a more lively look. The eye design reminded me of the characters from Mayoiga even those are animated by a different studio being Diomedea in stead of Dogakobo. But then I went and looked at some pictures from Plastic Memories, another anime from Dogakobo. Great anime btw, definitely watch it if you’re into romance-drama. And also there I noticed that sparkle in the eyes of the characters so that’s something that Dogakobo has mastered. For a video review, check out my Youtube channel. Link on my profile page. *Then NG was supposed to be lighthearted comedy and it became exactly that. The comedy was simple but effective. No deep meanings or difficult interactions but straight and simpel comedy which was what I expected from NG. Although I must say that the comedy sometimes was a bit weird. Not that I’m complaining but there were some moments where I had to rewind the episode to see if I got that right. *And a final thing that also greatly impacted the comedy were the yuri innuendos between Yagami and Rin because they were quite strong at times, especially in the final episodes. But again here not that I’m complaining, the innuendos made some pretty good comical moments and were part of NG’s good comedy. Negative *A first thing or better person that I found deserved more attention and development was Hifumi. The anime stays quite on the surface when it comes to her development. She does become a little bit less shy over the course of NG but still I thought that things like her love for cosplay would have been displayed more so that, with the help of Aoba, she could have opened up more. *Another thing was that this anime did focus on the development of a game but we get to see very little of it mostly for two reasons being: 1) Aoba only gets into the team very late in the development phase so we never get to see how the foundations for the game were laid out. And 2) every character except for 2 work in the character design departement. So we do get to see how these characters get designed but other elements of the game like programming, script writing, voice acting never get shown. So despite NG giving us an insight in the game’s development, it’s only in a small niche from the bigger structure that lies behind set game. *And a final negative point was that although I liked the character design and the overall colors of the anime, there were some times when the animation showed signs of “budget shortage”. I especially noticed this when there were a lot of people in one shot. Our main characters, who were on the foreground would be animated as normal. But I noticed that the characters on the background would be completely still, they were not animated at all but simply drawn into place. So probably that was to save budget but it was something that was very noticeable. Conclusion So as a conclusion, NG became what I expected it to become. It was an overall simple but therefor not less entertaining anime, and I like having one or two of those in my schedule. So for this fun and entertainment I’m going to rate New Game! at 3,5 stars. This is a lighthearted anime that you should give a try if you’re into simple comedy anime’s. 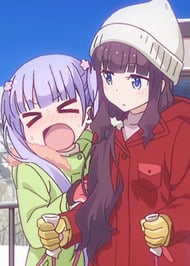 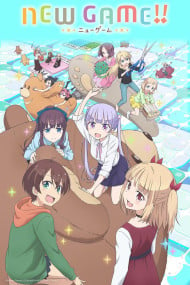 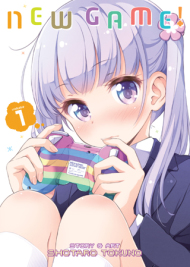 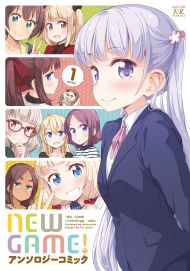