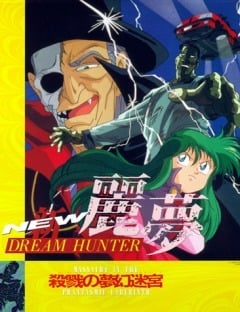 If you're looking for anime similar to New Dream Hunter Rem: Setsuriku no Mudenmekyu, you might like these titles.

Like in this OVA phantom Quest Corp features ghost hunters solving different cases related to the supernatural, be it a demon running amok, a ghost possessing someone, or something along those lines. Phantm Quest Corp is a bit longer, but if you want someting similar that's not plot-heavy then give it a go!

The sexy and money-hungry Reiko Mikami is a ghost sweeper - a person who defeats monsters and evil spirits that cause harm to people. Along with her loyal assistant Tadao Yokoshima and the human-sacrifice-turned-spirit Okinu, Reiko will take whatever job necessary to gain a few yen. From putting a stop to psychotic dolls to foiling bank robberies, there's nothing the poltergeist-thwarting gang can't handle!

Ghost Sweeper Mikami is a show that features ghost hunters solving different cases related to the supernatural, be it a demon running amok, a ghost possessing someone, or something along those lines and has no overarching story, much like this OVA. So if you liked it and want to watch more smilimar stuff check this one out!

He gave up his life to save the world and protect the ones he loved. The day Lelouch vi Brittannia fell was the day this war-torn world found peace. Now, as his friends work to keep the peace, a terrorist attack could risk everything. Can the brilliant tactician outwit death and save them all? Or will Lelouch’s legacy fall here?

In Paris to model on a fashion show organized by Erika's mother, the Pretty Cure meet a mysterious boy who is being chased by an ancient Desert Apostle named Count Salamander. The young boy introduces himself as Loup Garou and he wishes to make Salamander give up on his desire to destroy the world after being imprisoned for over 400 years.