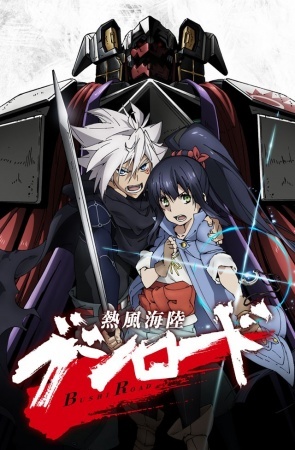 An asteroid collision brought with it a deadly menace known as "Shinbo." Faced with destruction, humanity retreated to land reclaimed from the sea. The one ray of hope is a device that can fight the Shinbo called "The Mechanical Divine General." Ame, the princess of the refugees, and Suō, who carries the blood of the Yagyu family, must awaken its power in order to save the world.

I mean if you dont have anything to do, watch it.. I liked the ending,  if I could give a score only for the ending it'd be a 7.9. But the rest was kind of sort of boring.

This review is a personal opinion and it should be treated as such. Neppu Kairiku Bushi Road started off with an interesting premise, but at some point the anime just seemed rushed which kind of ruined it. Animation On the visual side the animation is nicely done, the colors blending well together giving the right mood to the scenes, but on the action side it could've been done better because some scenes feel too slow for no real reason. Audio The soundtrack selection could've been improved quite a bit to bring out more feelings to the surface, but in the end it worked out. Not entirely the audio's fault here, because you don't get many chances for the audio to make an impact, taking into consideration of how rushed the anime is. Nonetheless, it still could've been better. The voice acting was fine, but it could've been put in another light if the soundtracks were better, and most probably if the story wasn't rushed. Characters You don't get that much information about the characters, and because of that you can't really emphasize with them, not to mention that there are characters that you barely know anything about, besides the fact that they just happen to be there to be of assistance, but even so they barely impact the plot whatsoever. In some cases this works, but here it feels kind of dull because not even the main characters don't give away too many informations. Also some characters were presented in the begining looking like they had an intention for them to play a role in the story, but as the story progressed, they were just cast aside. This is probably because the creator of the story, Sunao Matsumoto know professionally as Sunao Yoshida, died before he could complete it, and when the story was taken over by others, they didn't knew what the original creator had in mind, so it became kind of difficult to convey something. On that note, he's also the author of Trinity Blood, although the anime adaptation has some continuity problems. The character developement isn't contured that well because of the lack of information, and even if you see the characters change you don't quite get the hang of why it happens, since you don't see the impact that the events had over the them. Even so, the main characters looked like there was more about them then what it was shown, but they never got into that. Story The storyline starts normally, but after a while it seems like it's rushed, not giving much time for the understanding of the characters, therefore not giving you the right mood for bonding with them. You do understand from where they're coming in the case of some main characters, but you don't fully receive the feeling behind them, which makes the story feel like it's superficially narrated as it progresses. Also sometimes it cuts right in the middle of the action, then returning after it was over, moving on to the next event, not giving much information of what actually happene, besides a brief explanation, which adds to the feeling of the anime being rushed. On the other hand, it's an interesting story, but I can't rate it any higher because of how rushed it seemed, not getting through all the feelings behind it, and neglecting some characters's developement.

This movie annoyed me so much! I'm really angry. I'll explain right away. It had so much potencial!! *grits teeth* Characters were so likeable, but there was no depth to them. I understand that you just can't cram everything into a movie BUT it felt so hollow. And I wanted to love Suou so much. Pretty boy - my damnation, and then Shin appeared and I admit I finished this movie only because of these two candyeyes. Didn't really like the princess because...NO FRIGGING TIME TO GET TO KNOW HER! Seemed a bit whiny -.- and noone likes those. The beardy guy said she's stronger than she thinks..well, they didn't show it. grrrrr...So, this movie is one annoying memory in my anime life. Maybe I'll make Shin or Suou my walpaper for a while...well. Nvm. Watch it if you dare. And btw Suou's eyes! I'm sucker for those azures...and I blame Yato!